The Path to Israel’s Independence

In a few weeks, we celebrate Yom Ha’atzmaut, Israel’s Independence Day. While many people have never known a world before Israel existed, some still remember the struggle to make the dream of a Jewish homeland into a reality.  American Jewry played a vital part in the founding of a modern Jewish state and Detroit was at the forefront. While many Detroiters were crucial in the development of Israel, the life-altering journey of two men, Louis Berry and Joseph Holtzman, remain a legend to this day.

In 1946, the Allied Jewish Campaign, Federation’s principal fundraising mechanism, resumed after a three-year suspension in favor of the Detroit War Chest. The focus of the Campaign remained on overseas needs, allocating a majority of the pledged funds to United Jewish Appeal.

Founded in 1939, United Jewish Appeal (UJA) was the single fundraising instrument for the American Jewish Joint Distribution Committee, United Palestine Appeal and National Refugee Service. For the 1946 campaign, the dynamic executive director of the UJA, Henry Montor, set a bold fundraising goal of $100 million and asked the Jewish communities around the country to contribute. But his most audacious idea would come two years later, when UJA announced their $250 million quota. At a special Executive Committee meeting of Federation, which was attended by Golda Meier, Detroit was asked to pledge $5.6 million to the cause.

Eleven Detroiters, including Joseph Holtzman and Louis Berry, helped set the national fundraising goal at a UJA meeting in December 1947. Little did these two men know that one month later, a trip overseas with UJA would change their lives forever.

This fateful mission began with Louis Berry. Berry, a real estate investor, owned a number of properties, including the Fisk Building in New York City where the UJA was headquartered. Buoyed by their $100 million campaign, UJA needed to expand their office but the building was full. Upon discovering a Jewish man from Detroit owned the building, Montor reached out to the Detroit Federation to connect him with Berry. The next time Berry arrived in New York, Montor was waiting for him at the airport and UJA got the office expansion they desperately needed.

Berry had just become more active in Detroit’s Allied Jewish Campaign, taking on chairmanship of the Real Estate Division of the Detroit Service Group. Now he was also being courted by Montor for the UJA. In the fall of 1947, UJA proposed a one-month mission to study the rehabilitation needs of the remaining Jews in Europe and to survey the immigration, up-building and settlement requirements in Palestine. Montor pressed Berry to be one of the delegates to take this historic trip.

While Berry considered this, he was also soliciting on behalf of the Real Estate Division, which included his friend and fellow real estate developer, Joseph Holtzman. Holtzman was skeptical about the idea of an Israeli state and whether or not it could thrive, given the surrounding hostilities. So Berry made him a deal: Berry would go on the UJA study mission only if Holtzman went too.  Holtzman agreed; it was a turning point in his life.

26 delegates from across the country and 7 members of the press left for Europe on January 27, 1948 aboard a plane called the “United Jewish Appeal Star of Hope.” At the Foehrenwald camp, near Munich, Holtzman and Berry gained firsthand experience of what it meant to live as a displaced person. They spent 24 hours at the camp, eating the typical dinner of oatmeal, potato soup and bread and then sleeping on narrow cots with nothing more than thin blankets. They also spent time with the occupants of the camp and heard their personal stories. At Landsberg, the second largest displaced persons camp, the camp chairmen Isaac Melnick articulated, “Our dead are buried here. Their children are forced to live on the soil drenched with the blood of their parents. It is time that we were freed from our enslavement in Germany. We can look only to the Jews of America and the United Jewish Appeal for our real liberation.”

After two weeks of visiting camps, the delegates arrived in Palestine. Said Berry in a report following the experience, “I am glad that the second phase of the trip was Palestine. That was like coming out into daylight from a dark pit.” He continued, “…I gained a better appreciation of what “homeland” means when I saw one of the reception centers where the Jews from Cyprus and Europe were entering. The look in their eyes, compared to those of their comrades in Europe, tells more about Zionism than all the political theses ever written…”

In his Review of the Year, William Avrunin, then Associate Director of Federation, noted, “In a single year, ‘Berry and Holtzman’ became a legend in Detroit’s campaign history. Their return from a trip to Europe and Palestine under the auspices of United Jewish Appeal gave immediate impetus to local fundraising.”

Indeed, Berry and Holtzman were unwavering in their focus for Detroit to meet their obligation to UJA. By August of 1948, the pair had spoken at more than 50 campaign meetings, according to Avrunin. They turned every meeting into a fundraiser and people grew to expect that if Berry and Holtzman appeared, a solicitation for the Allied Jewish Campaign would follow. Towards the end of the campaign, Knollwood Country Club added a P.S. on an event notice to members, stating, “Berry and Holtzman will not speak.”

Both Berry and Holtzman went on to have long fundraising careers with both UJA and the Jewish Federation.  And both attributed their steadfast determination to the 1948 study mission. For these men, it truly was a year of destiny – for themselves and for Israel. 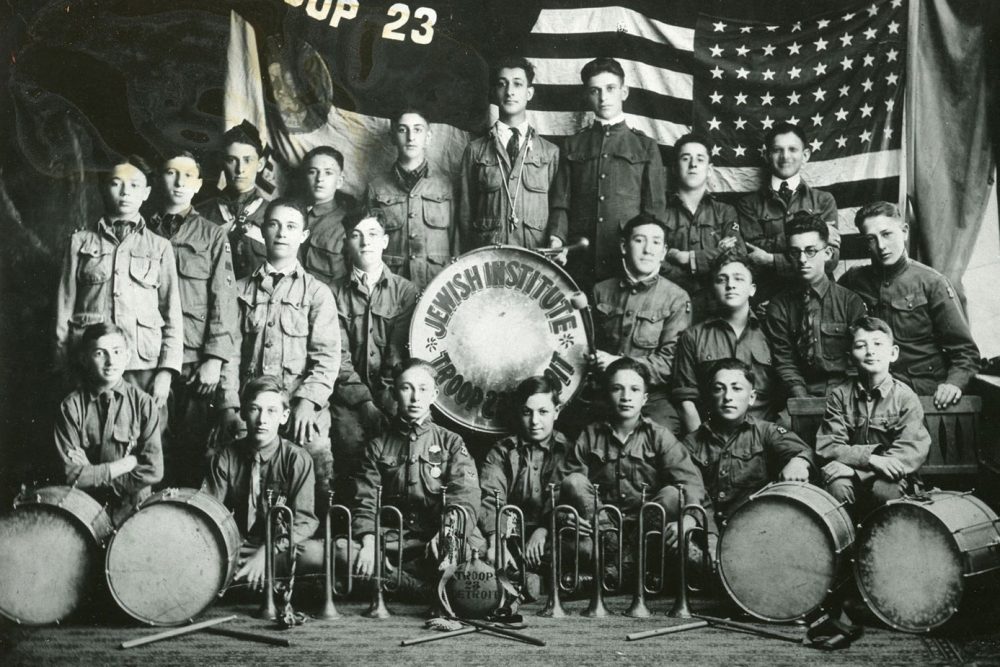 Here’s a look back at the Butzel Award from the archives.