It was a night to “Lift Every Voice” and break bread together.

In brotherhood and sisterhood . . . in solidarity . . . and in celebration, more than 150 prominent Black and Jewish leaders in metro Detroit gathered on February 20th at the Charles H. Wright Museum of African American History to launch the Coalition of Black and Jewish Unity.

Inspired by the African proverb, “If you want to go far, go together,” the coalition is a far-reaching partnership of the Council of Baptist Pastors of Detroit and Vicinity and the Jewish Community Relations Council/AJC established with the intent to engage with one another – to listen, to learn and to strengthen the bond between the Black and Jewish communities. A long range goal is to identify and develop the next generation of leaders to continue the work in the future.

The kickoff program convened by invitation of the coalition was generously sponsored in part by a grant from the Ravitz Foundation.

The executive leadership and advisory council of the coalition represent a wide sphere of local and national influence in interfaith and race relations focusing on social justice issues; members of the eight-member Executive Committee include: 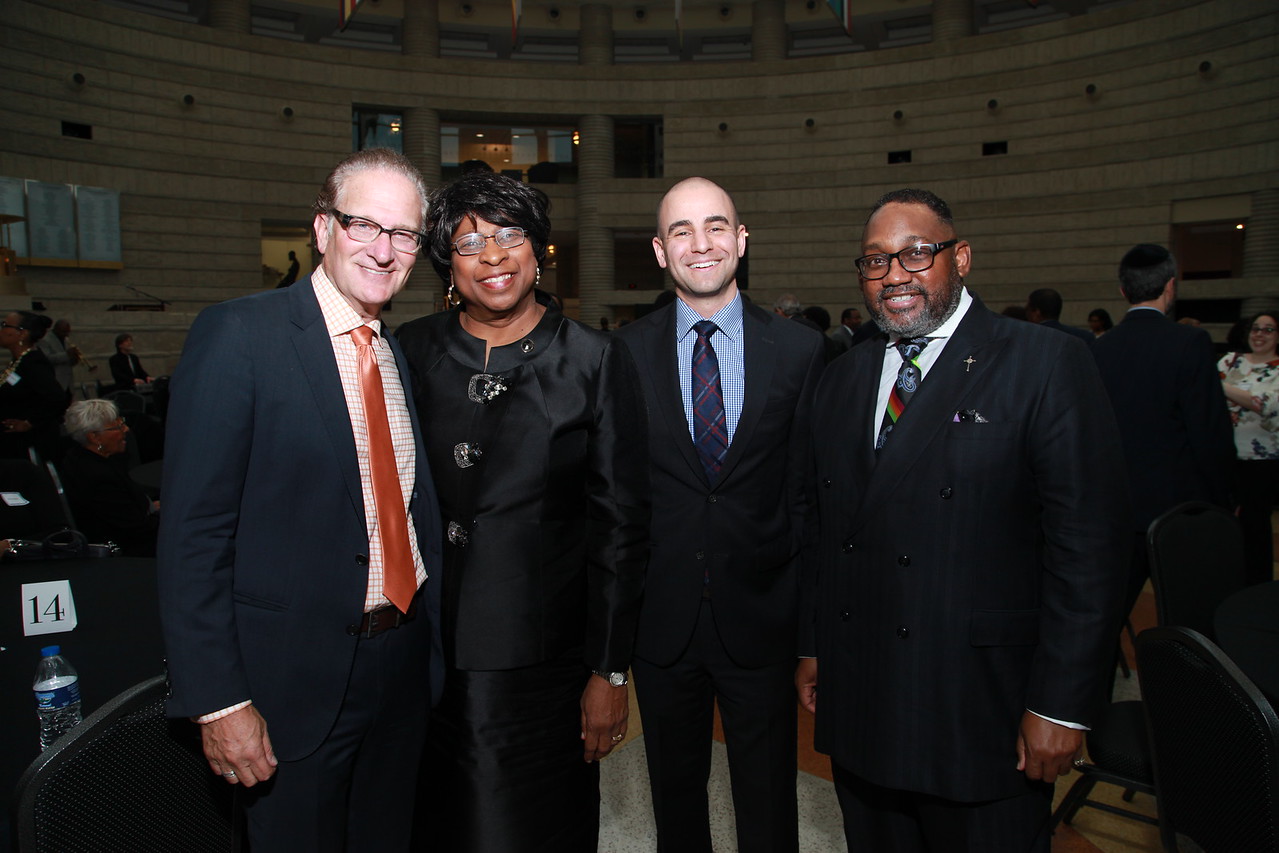 Why a Coalition?  Why now?

Without question, Blacks and Jews have a well-documented history of standing together and marching together during the civil rights movement of the 50’s and 60’s. “The concept of our coalition is not new,” says David Kurzmann, “Blacks and Jews share an irrefutable history. But our relationship can’t be based only on the past; it has to be a living, dynamic, multi-faced and responsive to the times.”

According to Kurzmann, the night before the “Unite the Right” rally last August was a flashpoint. “The tragedy that unfolded in Charlottesville was our wakeup call. We were shaken as a community when we saw the images of neo-Nazis marching on the streets and targeting both Blacks and Jews. The current environment of violence and the uptick of racism and anti-Semitism call for a united platform on which we can stand up and speak out together. We have work to do.”

“This is not a ‘cute’ coalition,” stated Reverend DeeDee Coleman in her remarks at the launch event. “We are not a coalition where we have nice little easy things to talk about. We are a coalition where we delve into issues that will have impact for our our community and the world at large.”

“This is our time”

In her comments, Rabbi Marla Hornsten offered, “This is our time: perhaps we were put here for a moment such as this, and this is our opportunity to do something, maybe slightly risky, and certainly consequential, that will change history.”

In homage to Black History Month, the program included a 10-minute excerpt of the documentary “Shared Legacies: The African American Jewish Civil Rights Alliance,”with an introduction by Dr. Shari Rogers, Ph.D., Detroit filmmaker and founder of Spill the Honey, a non-profit organization committed to advancing public knowledge of the Holocaust and the Civil Rights Movement.

“And still we rise”

After the dinner break, the program continued with speakers who brought the audience to their feet numerous times.

On the theme of a shared history of oppression, Rev. Dr. Glenn Plummer spoke of slavery as a lesson to be learned from the Jewish people. “We don’t ask Jews on Passover why they keep talking about slavery, because ‘it’s over’,” he observed. “Jews were not brought out of Egypt by weapons of war. They were brought out by a mighty and invisible hand. Jews have been telling this to their children and their children’s children through the ages. And in every age, the people who rose up against the Jewish people to destroy them – are gone.

As I stand here now, I propose that the same God – the God of Abraham, Isaac and Jacob – is the same God of Dr. Martin Luther King Jr., Rev. Kenneth Flowers, Rev. DeeDee Coleman – all of us  . . .”

“Black and Jewish, there is a creator looking over us, not because of our intelligence or our might, but because of his mighty hand that kept Jews for 3,000 years as a testimony in this earth – he has elevated African Americans, so that now together we can make a difference in this earth.  Let’s start here in Detroit.” –Dr. Glenn Plummer

Quietly, but equally fervently, Rabbi Daniel Syme, Rabbi Emeritus of Temple Beth El,  followed with the simple statement: “I have to tell you that tonight is a sacred moment in time, a night that I have awaited for a long time. .  . I remember how in 1963 my father,  Rabbi M. Robert Syme (z”l) told me how he would join a dontingent of Black clergy in Washington to hear Dr. Martin Luther King, Jr. speak, and he came back after that trip on fire.  He said, ‘I thought I was going to Washington for Blacks, and I realize now that I was marching for you, your brothers and all the people of our community. . .”

“America is an unfinished masterpiece. America as does no other nation, allows us to participate in its progress, carve our legacy into its promise and play a role in its possibilities.  This is both a privilege for Americans and a necessity for our nation.” – Rabbi Daniel Syme

Concluding the program, Reverend Flowers drew Halleluyahs. “Some say we’re here to build a new coalition. That phrase recognizes that if we’re here to renew or rekindle,  there must have been a coalition before. That coaltion was mapped out by God himeself. It came about while Jewish brothers and sisters and blacks continued to work together many, many years ago.  And I say to you, my brothers and sisters, now is the time to stand together and support one another, to pool our resources together, politically, economically and socially.”

“ I have hope – I still have hope –  that Blacks and Jews, as brothers and sisters,  will continue our friendship and solidarity against racism, anti-Semitism, bigotry and hatred of every kind.” –Reverend Kenneth J. Flowers

As Blacks and Jews in metropolitan Detroit, both partners have worked together effectively in the past to fight injustice, as have other coalition efforts, including New Detroit, MOSES and DRIVE. “The time has arrived to formalize a cohesive voice,” stated Mark Jacobs. “No longer will we be silent witnesses to hateful acts in America. Now is the time to dedicate ourselves to speaking in a united and forceful voice against racism and anti-Semitism and doing everything we can to counter hate speech and actions that threaten the lives and well-being of our people.  Of course the true measure of our success will be whether our efforts will have a significant impact on Black and Jewish solidarity in the next generation. That’s the big picture here.”

“We may have arrived in different ships,  but we’re all in the same boat now.” – Dr. Martin Luther King, Jr.

The Coalition for Black and Jewish Unity calls for members and supporters throughout metro Detroit. To learn ways to get involved, contact David Kurzmann at JCRC/AJC (kurzmann@jfmd.org) or Rev. DeeDee M. Coleman at Russell Street Missionary Baptist Church at 248-721-3917.

Now you can’t afford not to go.  For the first time in over a decade, the Detroit Jewish community will be traveling to Israel together. Thanks to an anonymous donor,… END_OF_DOCUMENT_TOKEN_TO_BE_REPLACED