Yaakov Gregg was out of town with his family when The Great Flood of 2014 hit Detroit on August 11th. They were celebrating a happy occasion – the 50th wedding anniversary of his wife Carole’s parents – when Yaakov got a troubling call from his neighbor back in Oak Park.

The entire neighborhood was under water. Sewage was backing up into basements all over town.Yaakov needed to get home. Immediately.

Upon their return, Yaakov and Carole couldn’t believe the damage in their basement. More than a foot of sewage-laden water had soaked into the drywall and the bedding where three of their seven children slept. The furnace and water heater, washer and dryer were beyond repair. The downstairs bathroom was in ruins, and gone forever were household items and records for the family’s two small businesses. For the Gregg family, the flood was nothing short of a disaster.

Describing his first reaction to the scene in his basement, Yaakov recalls his initial shock and denial, “No. Something is wrong here. This isn’t happening,” Yaakov said. “Once  the damage became apparent, it was clear it was beyond even what we imagined. How do we replace any of this?”

As was the case with many residents impacted by the flood, the Gregg’s home insurance was nowhere near sufficient to cover their losses. It was a time of extreme stress and uncertainty. Then, to their amazement and utter relief, the Greggs received an email with the message that help was available through Jewish Family Service (JFS)  and the Jewish Federation. In the span of just a few days, Yaakov and Carole had three separate meetings with JFS staff at the agency’s mobile flood relief center, at the Oak Park JCC, where they learned about emergency financial assistance for low- and moderate-income families. JFS helped accelerate their application for help and, in short order, they received approval for a grant to defray some of their expenses.

Noting the quick response of the community, Howard Neistein, Chief Administrative Officer of the Federation, stated, “”The coordinated efforts, orchestrated by the Jewish Federation and its partner agencies involving other Jewish non-profit organizations, volunteers, local businesses and private donors exemplify our community’s collective action at its best.”

With support from the Jewish Federation, the Jewish Women’s Foundation, The Jewish Federations of North America and many other generous institutional, corporate and individual donors, Jewish Family Service (JFS)  has been able to expedite and distribute more than $500,000 in grants to assist families with financing for clean-up and remediation, replacement of major appliances and rebuilding basements areas used as bedrooms.

“It was a true blessing that JFS took us under their wing,”It was only a matter of days before they were completely mobilized and organized in the flood relief effort. It was really quite amazing,” Yaakov said. “The clean-up was probably the biggest benefit that came from JFS. Our home does not smell and we’re able to live in it. It’s been sanitized. The next thing is replacing the appliances, a huge project for a large family.” 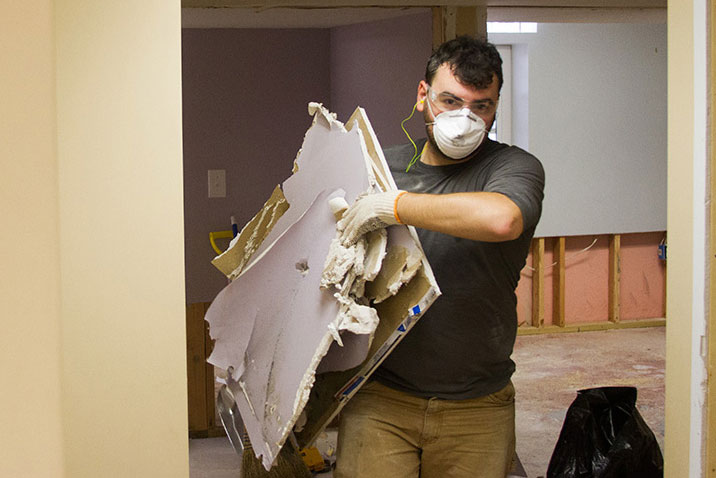 Jim, a volunteer with Nechama, removes drywall from a damaged house in Oak Park.

Additionally, Hebrew Free Loan has come to the rescue, helping homeowners access interest-free loans as quickly and efficiently as possible, and approving nearly 60 loans totaling over $420,000.

The Detroit Project Chessed has organized and delivered an impressive on-the-ground response within the Orthodox community, helping with clean-up and coordination, along with replacement of many of the essential items lost in the waters.

Nechama, a Minneapolis-based volunteer organization, has supervised a core of 25 to 35 volunteers daily. Since their arrival in the area August 17, they have cleaned more than 90 homes, approximately half of which were Jewish households. In addition, IsraiAID flew in a group from Israel to serve alongside Nechama for two weeks.

“There are no words to describe how ‘behind the ball’ we’d be right now without JFS and the concerted efforts of our Jewish community,” says Yaakov Gregg. “My wife and I are able to get our lives back together because of them.” 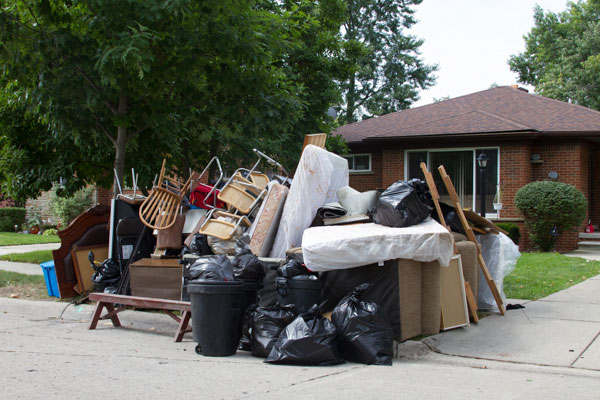 A common sight after the flood: damaged household items put out on the curb.

The need continues, and so does the community’s response

While the surge of flood relief activity is drawing to a close for many, crews of dedicated volunteers are still out there to help those still waiting for assistance. Due to the extensive damage, Nechama has extended their response deployment though at least October 31, 2014.

If you or someone you know still needs assistance, please call the Jewish Assistance Network at (248) 592-2650. Click here to learn how you can volunteer to help!