Building a new green space and play space for all ages.

By early morning, the park where no one could even play yet was completely alive with men, women and children.

Yana Vorstman was there with her two children, and so was the Blatt family. The Hickner-Rivard-Marzoratis came, as did Miriam Buckwold, Levi Serebryanski and his daughter, and Ira Winer and his son. Their ages, religious affiliations and backgrounds were different, but they were all there for one reason: to help complete the Oak Park Jewish Community Center’s new Community Recreation Park. The volunteers came on several days earlier this month to help affix seats, plant flowers and perform other small, but important jobs necessary to complete the project.

“I was so thankful that we had beautiful days, wonderful volunteers and we were able to move forward with this project to make our dream a reality,” said JCC Assistant Executive Director Leslee Magidson.

A green space and play space for all ages

The multi-generational park, which includes playground equipment, exercise areas, a walking track, gardens and play spaces for all ages and abilities, opened June 24.

The park was created thanks to a $260,000 grant from the Jewish Fund, generous donors to the Jewish Federation of Metropolitan Detroit and support from a recent JCC fundraiser honoring Donna and Allan Pearlman. It was designed by Superior Play of Michigan, whose staff put together the basics of the equipment and also supervised volunteers.

The park, like the JCC itself, is that rare spot where everyone feels comfortable. There are colorful, small places for tiny children to play, and big slides and running areas for big kids. There are tracks for slower walkers and for runners who whiz by, as well. There are easy-access areas for children with special needs, and challenging equipment for those whose idea of fun is doing 100 sit-ups. There’s a garden with benches nearby where anyone would love to sit and enjoy a gentle breeze and the soft, sweet smell of flowers.

On a typical weekend, passersby are likely to see boys in white shirts and kippot, and girls in snazzy earrings and shorts; families with little ones who’ve just learned to walk; and older adults from the nearby Jewish Senior Life housing. There are kids who come not only from Oak Park, but Huntington Woods, Berkley, Royal Oak and Ferndale.

A diversity of all hands on deck

Consider the diversity of the neighborhood and the volunteers who came to build the Community Recreation Park. Yana Vortsman, who was born in the former Soviet Union, was confident and relaxed when she stepped forward to help. “It’s easy,” she said of the building process. “You get the tools, you get a map, you get the instructions and you just follow them.” 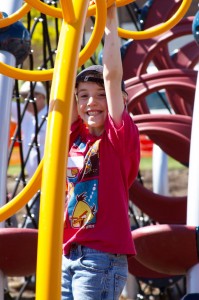 Faye and Paul Blatt, together with their children 11-year-old Spencer and 8-year-old Alana, also came to build the park. The children attend the JCC’s Camp Discovery, the Blatts serve on various JCC committees,  the children learned to swim at the JCC; and Paul and Faye love to exercise there. Even the family’s dog showed his support when he came for a visit last summer to the Camp Discovery pet camp.

Members of Shir Tikvah, the Blatts want to be there for the JCC for “whatever they need,” Faye said.

Levi Serebryanski and his daughter, Shira, 12, a student at Yeshivas Darchei Torah, were helping atop a slide, while Ira Winer and his son, Joey, 9, who attends Akiva Hebrew Day School, did some work nearby. Miriam Buckwold, whose husband teaches at Yeshiva Beth Yehudah, came to volunteer, saying: “It’s such a beautiful thing to be part of a community.”

While parents and older children worked preparing the play area equipment, JCC Camp Discovery Assistant Director Cathy Fresia supervised some of the younger girls. They wandered a bit through tall grass as they searched for a bird “with a black stripe and a green stripe and an orange stripe,” one girl said. “We just saw it” and now wanted a closer look. The girls also built a house for fairies, complete with bottle caps for seats, almond-and-chocolate candies for food and leaves for beds.

As the day came to a close, the area had been transformed, as if by magic. The nuts and bolts that had initially sat in clumsy piles on tables were now holding swing seats in place. What started out as looking like a rough sketch of a slide was now a complete and finished work of art. It was bright and happy – in short, the kind of place anyone would love to be on a beautiful day in the neighborhood.

JFS: How we responded to Covid

Yad Ezra: How We Responded to Covid

Jewish Senior Life: How We Responded to Covid

2020 will be remembered as the year of the COVID-19 pandemic, a global crisis whose impact continues to reverberate on an unprecedented scale. In our community, the seriousness and anticipated longevity… END_OF_DOCUMENT_TOKEN_TO_BE_REPLACED