At the suggestion of real estate property manager Adam Bleznak, we met for lunch at “the last standing Jewish deli in Detroit,” a once-and-possibly-future favorite spot on Michigan Avenue, staunchly holding its own on the edge of Corktown. You might call the place “retro”  or “vintage chic” were it not for the fact that the Hygrade Delicatessen has survived curiously impervious to the changes in its neighborhood for more than 60 years. 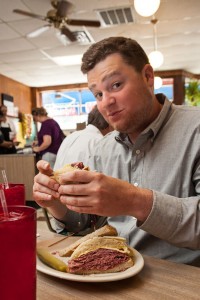 Like so many other deserving yet benignly neglected Detroit venues, the HyGrade Deli is a hidden city gem.  Awaiting recovery and rediscovery. Which brings us to the purpose of meeting Adam. Over famed Detroit-brand Sy Ginsberg Corned Beef piled high in Reuben sandwiches (reputed to be the very best in town), Adam describes his community connections:  from real estate management in Ann Arbor to Detroit neighborhood renewal and an upcoming music festival called Oakaloosa.

A music festival with a philanthropic heartbeat

If the name Oakaloosa doesn’t yet ring a bell or roll off the tongue, it will.  Soon enough. Featuring a star-studded roster of bands coming July 27 to Detroit’s Historic Fort Wayne, Oakaloosa is a first-of-a-kind, nonprofit venture, a “music festival with a purpose” that, according to Adam, could well become “one of the most impactful annual charity events in the city of Detroit.” As Festival Program and Sales Director, Adam, 25, has taken a lead role in backing and promoting the event.

A percentage of  the proceeds from Oakaloosa will support youth programs through Detroit Sports Zone, Inc., one of the nonprofit organizers of the event. Founded in 2011, and based on the vision of Detroiter and former Harlem Globetrotter, Ernest “Wag” Wagner, Detroit Sports Zone is committed to engaging people of all ages in sports, cultural arts, mentoring, life-skills development and character-building activities.

This year, additional proceeds from the festival go towards the much-needed renovation of Historic Fort Wayne to restore it to its previous glory and to preserve it as a family destination for future generations to enjoy.

By design, the grounds around the Fort create a natural amphitheater, a spectacular setting for the event. “Like many venues in the city of Detroit, time has eroded this stunning site,” Adam observes. “The Detroit Sports Zone in partnership with the City of Detroit Recreation is sponsoring Oakaloosa with the purpose of drawing thousands of young people to the shores of the Detroit River for something never seen before. For us, this festival is all about boosting the city, having a great time and giving back.”

A 2010 graduate of University of Michigan, Adam was headed to law school when opportunities in the real estate market instead compelled him to join his father in Bleznak Real Estate Investment Group, the family firm headquartered in Birmingham, MI. As the third generation in the business, Adam has an impressive track record for managing a portfolio of multiple properties and growing the enterprise.

About a year ago, a chance encounter at Bert’s Barbeque in the Eastern Market put Adam in touch with Miller London, a former senior V.P. of Motown working with Detroit Sports Zone, “an amazing group of individuals” organizing basketball leagues, referee training and other sports activities for youth in Detroit neighborhoods. The organization had been working to establish itself as a self-sustaining nonprofit model, and invited Adam to join its Board to help its fundraising efforts. As Adam was soon to learn, Detroit Sports Zone happened to be a legacy organization of the Motor City Youth Initiative, a nonprofit founded by Adam’s grandfather, Richard Bleznak, with his long-time friend, Ernest Wagner.

“This seemed more like a calling than a coincidence,” says Adam. “Once I learned about the Detroit Sports Zone’s connection with my own family, I was even more dedicated to helping this group with fundraising, in order to realize the dreams set forth by its founders and to accelerate the work to fulfill their vision.”

With the help of the community and the sponsors, Oakaloosa is anticipated to be an annual mega event, drawing a regional audience from the Midwest and Canada, capable of generating hundreds of thousands of dollars for charity, and establishing itself as a major player in the Detroit music and cultural scene.

Festival passes are $45 each and are available now through Oakaloosa.com. From 12 p.m. to midnight, Oakaloosa attendees will enjoy non-stop music from the historic location. Stages will be set up near the barracks and the bank of the Detroit River, with the open field and ample parking available to festival goers.

Now you can’t afford not to go.  For the first time in over a decade, the Detroit Jewish community will be traveling to Israel together. Thanks to an anonymous donor,… END_OF_DOCUMENT_TOKEN_TO_BE_REPLACED