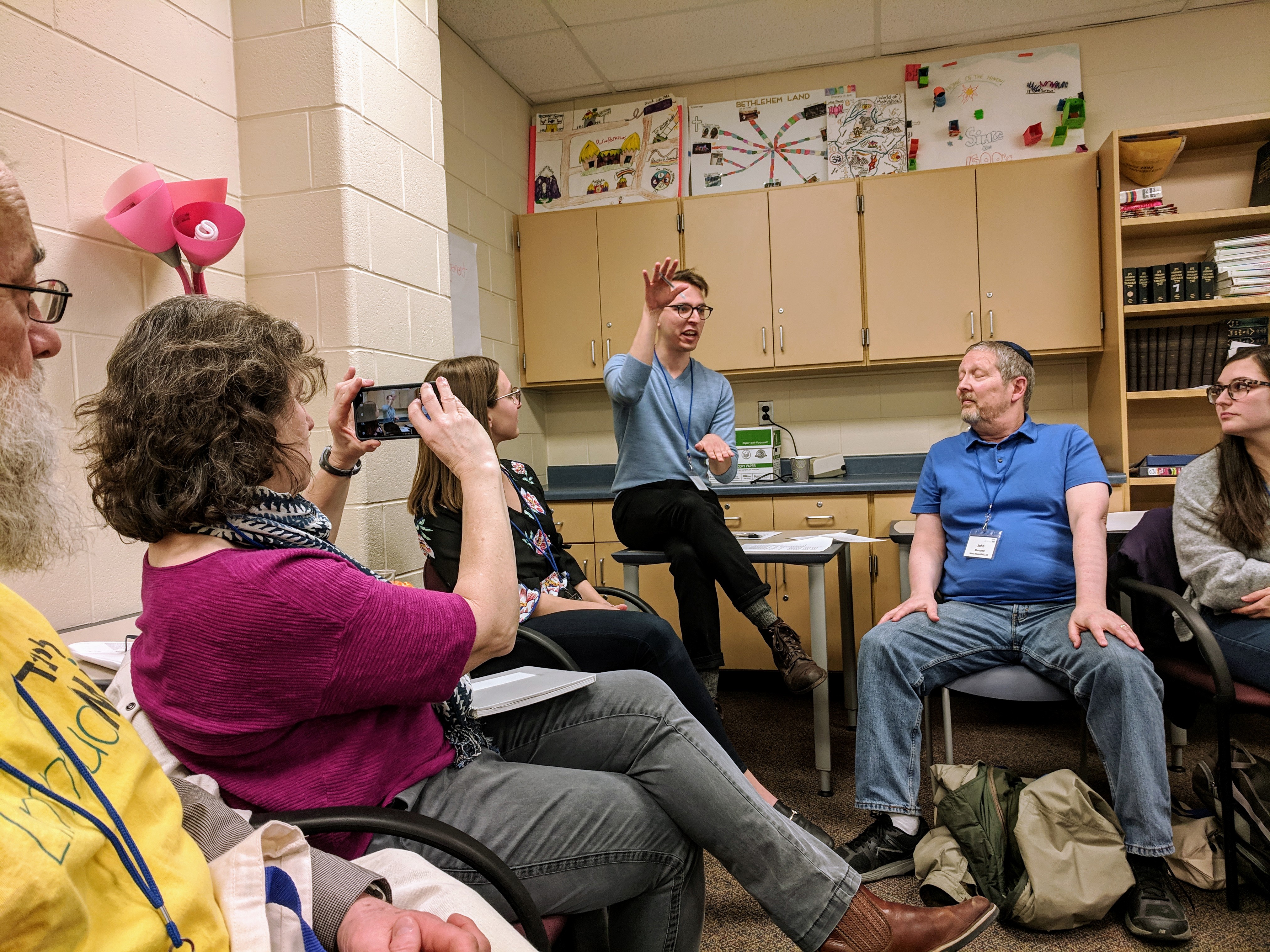 In case you missed it, here's what you might expect from a day of unexpected Jewish learning...

On March 31, over 500 participants braved the unseasonable weather for Limmud Michigan, “an inclusive festival of unexpected Jewish learning run totally by volunteers.”

As part of My Jewish Detroit’s occasional series In Case You Missed It (ICYMI or, as is often the case, icyMI), Dexter Davison provides a snapshot of just some of the 70+ sessions from the 4th Annual Limmud Michigan.

An embarrassment of riches! The depth and dynamism of local learning at Limmud is remarkable. The presenters’ intellectual rigor, zealous advocacy, creativity and humor were reflected back by the participants.

I was torn between multiple topics and presenters during each of the day’s 6 rounds. (Lunch was less of a dilemma … veggie wrap for the win. And the Costco snacks, all with recycling and composting courtesy of Hazon…)

I’ve included quick look at each of the sessions I attended — as well as some where I had to settle for being there in spirit — though I can hardly do justice to all the thought-provoking content and edifying engagement. Suffice it to say, this is not a top ten list.

My advice is to get there in person next year. Or better yet, volunteer.

1. Jewish Monsters Beyond the Golem

Dexter’s Take: I will never think about unicorn’s the same way again.

Sample Source: “The Jewish Problem: How To Solve It” by Louis Brandeis (1915)

Dexter’s Take: Howard (first names/no titles at Limmud) gave us useful concepts and context for for untangling what just might be the knottiest issue imaginable. With sources ranging from Wagner to the Hamas Charter to Cornel West, Howard encouraged us toward nuance and proportionality in understanding and responding to Anti-Semitism.

3. The Tax Foreclosure Crisis in Detroit: What is it and why should I care?

Who: Lauren Fine and Gabe Slabosky

Dexter’s Take: Tax foreclosure touches every neighborhood in Detroit, ripples beyond the city limits and, most importantly, robs children of the stability they need and deserve. Lauren and Gabe drew on their outstanding work with Detroit Jews for justice to put this broken system into a historical, regional and political context.

What: In 1969, Zager and Evans, in a number one song, wondered if man would still be here in the year 2525. In 2013, the Pew Research Center completed a major survey of American Jews in which they assessed the condition of the American Jewish community. So in the year 2019, we look at the Pew survey and see both reasons for hope and reasons for concern as to the long-term future of American Jews. Some data from the recently completed study of Detroit Jews is included to highlight factors on which the Detroit Jewish community differs from the national picture.

Dexter’s Take: Ira recently completed a local population study (in-depth information available online), but this session was focused on the American Jewish population. The Pew Research Center did a nationwide study of Jewish Americans in 2013 and is preparing to do a follow-up next year. Even as it grapples with generational dynamics and tracks broader national trends, the American Jewish Community, as Ira shows, is “strong and well organized.”

Two constituencies Ira assured us are well represented in our community:

The Jewish Pessimist: “Things can’t possibly get any worse.”

The Jewish Optimist: “Yes they can!”

5. Welcoming the Stranger: Our Journey to a Detention Center for Migrant Children and a Vision for Compassion at Our Borders

What: In November 2018, we joined our rabbi and faith leaders from all over the country in protest outside of the detention center for unaccompanied minors in Tornillo, Texas. Understanding that, as Jews, we are commanded to welcome the stranger, we felt compelled to demonstrate, bear witness, and use our voices to urge our elected officials to end the practice of child detainment and shut this facility down.

As Jews, and, more broadly, as concerned humans who understand that “never again” means that we must stand up in the face of injustice, we felt compelled to witness that which was being done by our government and use our privilege to protest that which we find unjust. In this session, we share our reflections on our experiences at Tornillo (and in El Paso and Juarez) as well as ideas for future action.

Dexter’s Take: If not us, who? Check out HIAS’ Guide To Becoming A Sanctuary Congregation

6. Facing Our Fears: Intermarriage, Identity and Israel – Oh My!

What: The Jewish community is afraid of many things – Israel conversations, intermarriage, the continuity crisis, the future of Jewish communal institutions, and more. Without acknowledging these fears, our decisions can be irrational, and to create a stronger Jewish community we must create space to process and understand these fears personally and communally. As social work students we seek to analyze why and how we talk about our fears, and how we can transition from conversations of fear to those of hope which will create a stronger vision for the Jewish future.

Dexter’s Take: Powerful session. Upon entering the room (thank you, Frankel Jewish Academy for hosting), we received sticky notes and could place them under the things that we fear for the Jewish people.

With the social work students as our facilitators, we acknowledged the validity and power of fear as an emotional response — and the consequences of making fear-based decisions. Then we explored strategies for responding to an reframing our fears.

7. Civil Discourse between People Who Totally Disagree: Is it Possible?

What: Why should people who are different in political views or religious views, or from totally different backgrounds get together and try to connect through Civil Discourse?  Asher Lopatin will make the case that not only is this exactly what America needs, but also that this is the way to strengthen our communities and civic structures: we have to come together, we have to find a way of partnering and even enjoying each other’s fellowship even if we may be totally different on critical issues or attitudes.  Come here and argue (civilly, of course) and let’s figure this out.

Dexter’s Take: Asher has only been in Michigan eight months and, in that short time, has developed strong relationships in the Muslim community. He explored historical precedents for going it alone (sorry, Samaritans) and for working together (pre-polygamy Solomon), reminding us that the same freeways that can get us home in a hurry can also ferry us to Dearborn, Hamtramck and other corners of our community we might otherwise bypass.

8. How Jewish is Feminism?

What: While the history of the American women’s movement of the 1960s and 70s is generally recounted with little reference to Jewish identity, some observers note that most leading feminists of that era seem to have been Jewish.  Indeed, although it’s easy to locate influential Jewish feminists, few of them emphasized their Jewish identity at the time. This session will look at the erasure of Jewish identity both by historians and by those who sought to join what they saw as a universal struggle for liberation. It will then take up the question of what might be learned if we began to look at the history of feminism through a Jewish lens.

Dexter’s Take: It’s fascinating to explore the Jewish seeds that are part of sprouting social and political movements, even (or especially) when popular narratives downplay the Jewish influences or identities of movement leaders and participants.

9. From Egypt to Postville (and beyond): Jewish thoughts on migrant labor

What: The Jewish people have, throughout its history, been primarily migratory. Almost all major figures in Jewish tradition have physically migrated as a result of divine intervention (from slavery), famine, political instability, persecution, and/or economic opportunity to name a few reasons. Over successive millennia, Jews have migrated the world over for similar reasons. We will briefly examine Jewish migration from historical and halachic perspectives so as to explore more deeply the current experiences of migrants in the United States (and Israel).

Dexter’s Take: In the 11 years since the federal raid on Agriprocessors kosher slaughterhouse and meatpacking plant in Postville, Iowa — the largest immigration raid in US history — issues about where law, ethics, market forces and geopolitics intersect have only gotten more complex. Ruby recommends this Univision documentary for a look at the legacy of Postville.

What: Examining the transformative effects of WWII on Michigan’s Jews by zeroing in on the neighborhoods in Northwest Detroit where they settled beginning in the 1930s.  Take a walk down memory lane as the ten-square-mile community bounded by Eight Mile, Livernois, McNichols, and Evergreen is discussed, focusing on well-known synagogues, businesses, institutions, schools–and the little-known landmarks, including the “Birwood Segregation Wall.”

Dexter’s Take: There would be no Dexter Davison without Dexter-Davison.

Dexter’s Take: There would be no Dexter Davison without Dexter-Davison.