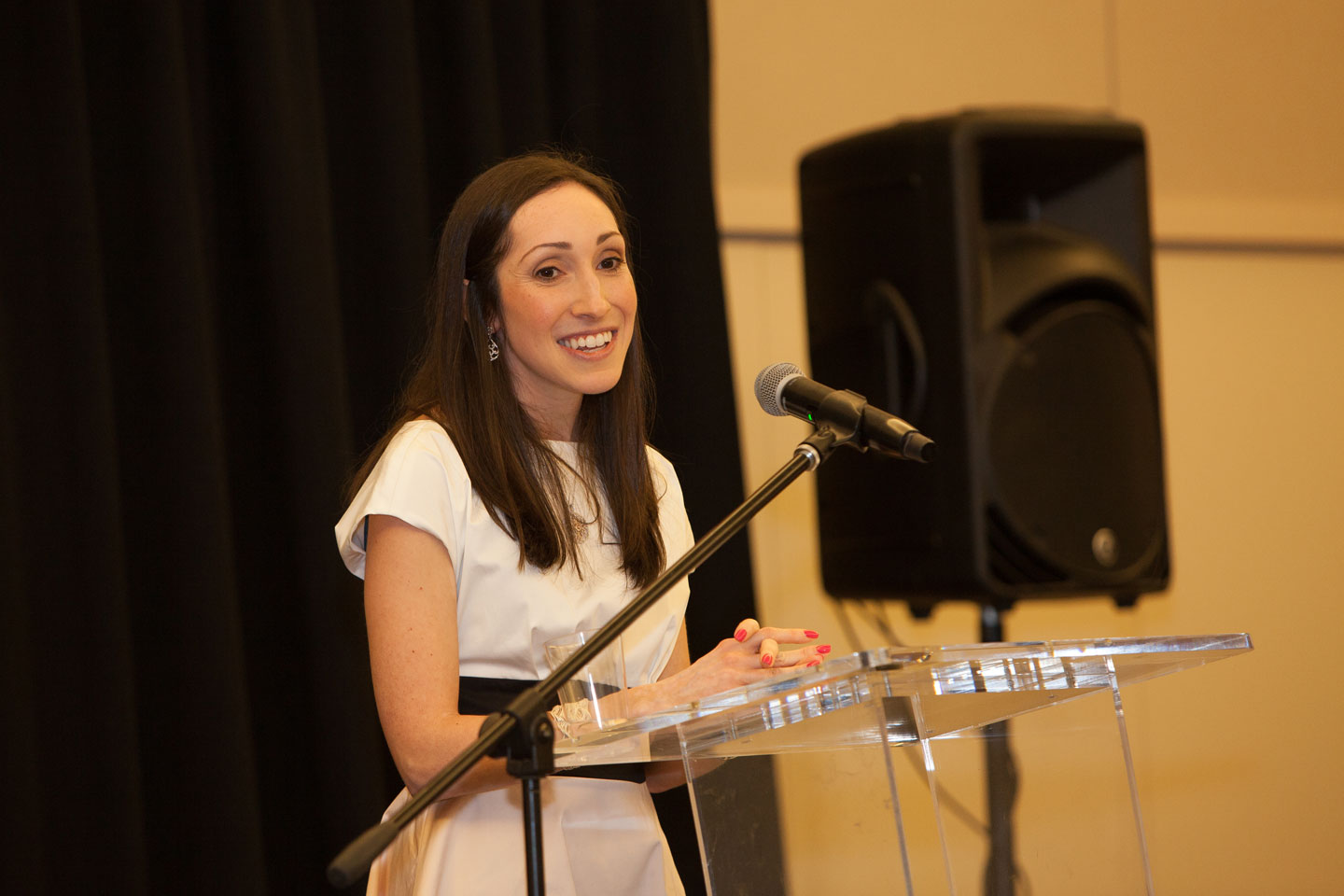 NEXTGen Detroit’s New President Ilana Block has been juggling career, family and community since she moved back to Detroit in 2009. Why? Because building a strong Jewish future in Detroit isn’t just in her blood — it’s in her heart.

For those who know her well, there was a sense of what was to come when Ilana Block took the stage and centered herself behind the podium at NEXTGen Detroit’s Annual Meeting last month. And for those who didn’t, what followed was a powerfully moving jolt. No one in the audience that night will soon forget the address given by NEXTGen Detroit’s new President.

“During my term, I want to focus on leadership that is intentional, purposeful and meaningful. To me, passion is contagious, and if I can inspire those who will inspire others, I will have succeeded.”

If the Annual Meeting is any indication, she’s off to a sensational start. Her words, a motivating reminder to everyone there, told the story of a family’s legacy, the importance of community and the joy of coming home.

Like so many of her peers at the time, Ilana Block left Detroit after college to pursue her career. An alum of Hillel Day School and a member of the first graduating class of Frankel Jewish Academy, she lost no love for her hometown or hope that she would one day return.

“I always knew that I would come back to Detroit if at all possible, but marrying [my husband] Adam threw a wrinkle into that once he began working on Wall Street.”

Adam, a Cleveland native, and Ilana met while they both were studying at the University of Michigan. While there, Ilana was active in Jewish life on campus and Jewish causes. She also studied a year abroad in Israel and had internships at the Jewish Agency for Israel and the Jerusalem Post. But when it came time for the young couple to begin their careers, Adam in finance and Ilana in law, opportunities took them to New York.

“Sure enough though, it was a connection in this Jewish community that allowed us to return by offering Adam a special opportunity to work within Dan Gilbert’s family of companies.”

Ilana and Adam moved back to Detroit in 2009 while most of her friends from growing up were living elsewhere. Newly married and newly returned, Ilana went back to her community roots to begin this new chapter of her life.

“Initially my intentions were self-serving. Getting involved with Federation was a way for me to make new friends and network for my career. I remember walking into Como’s the summer we moved back for a YAD (what is now called NEXTGen Detroit) Couples happy hour. That’s when Alexis Schostak approached me. She was also a lawyer who had moved here from New York. Alexis took me under her wing and made sure to help me continue my engagement at every point. That’s when I realized that it’s all about personal connections. Years later, when I started to give back, I hoped to be the same type of connector for others seeking communal involvement.”

After that first YAD Couples event, Ilana hit the ground running. She participated in Entrée, NEXTGen Detroit’s entry-level leadership development program and was assigned a mentor, Dr. Jen Friedman, a past president of Federation’s YAD.

“I remember Dr. Friedman saying to me, ‘I think you’re going to be sitting in my seat one day.’”

From there, Ilana joined the NEXTGen Detroit Board, led couples programming and an Entrée class, and then served as co-chair of NEXTGen Detroit’s Campaign.

“Every year, I would look to see who was taking the helm as our President. In my mind, each of these amazing individuals brought a unique combination of talents, and I was in awe of their dedication. Finally, with the help of past president Steve Migliore, I realized it was my turn to step up.” 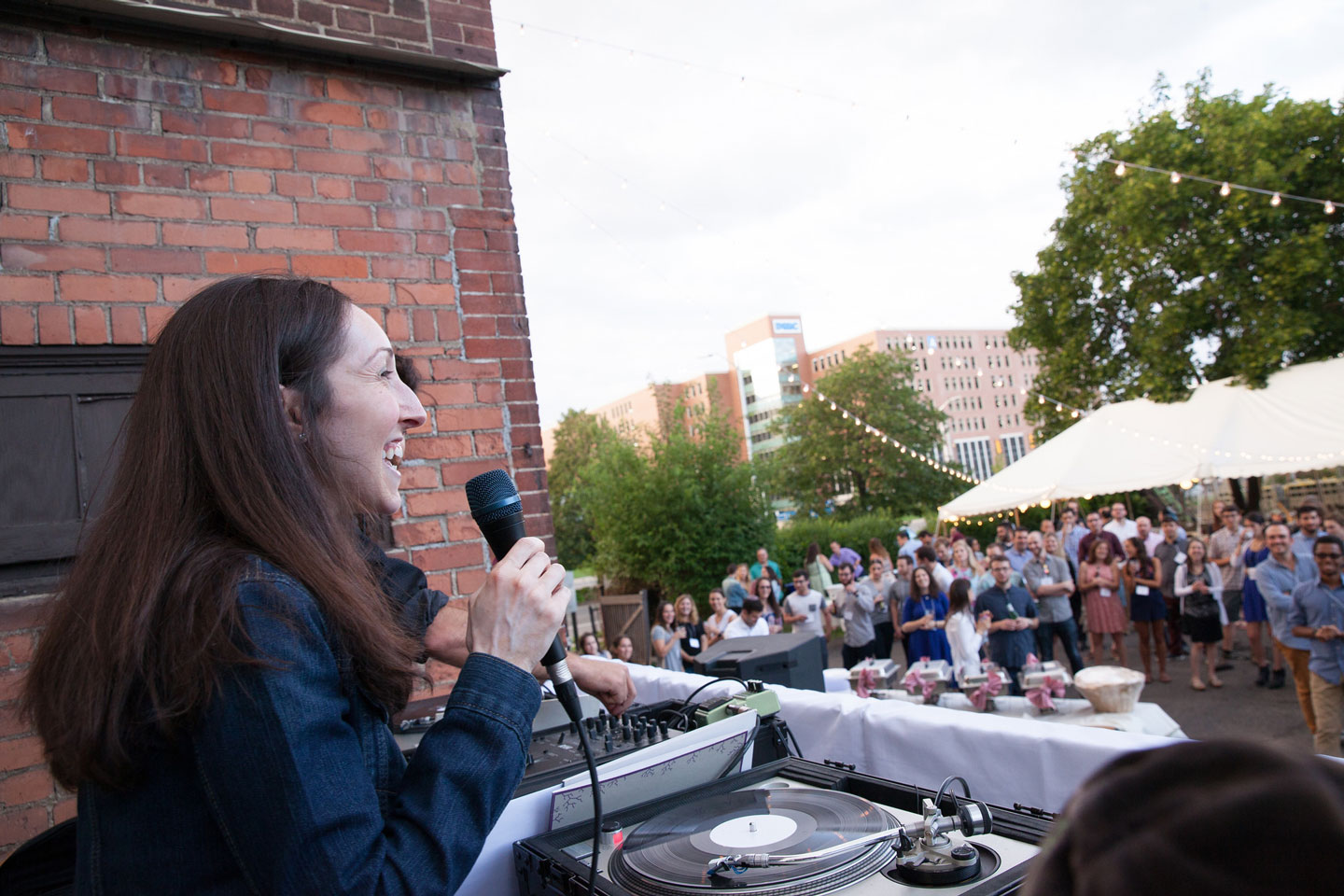 Ilana addresses the crowd at Good Shabbos Detroit, a monthly gathering for NEXTGeners to have Friday Night Dinner together.

mJD: Why do you think it is so important for young adults to be a part of their Jewish community?

To me, Jewish community is just a larger extension of what it means to be family. Sometimes, especially in adolescence, you want to stray from your family. But as you grow, you may find your family is actually pretty great and more importantly, that it can provide you something that no one else can. In keeping with this family metaphor, there are dynamics in a family. Sometimes you are giving more than you take in your relationships. And at other times, you are taking more than you can give. And that’s all ok. Like a family, our Jewish community is here whenever a person is ready to reach out and participate. And what you’ll find when you do choose to participate, is that you were meant to be a part of this all along.

mJD: What do you think people from other parts of the country find most impressive about our young adult Jewish community?

We seem to have a better understanding of the word “community.” It’s not just that we know we have something in common—being Jewish—it’s that we have an innate instinct, part of our Jewish Detroit DNA, to feel that we are actually responsible for helping one another.

mjD: What are some of your earliest memories of Jewish community?

Celebrating Shabbat. Family Camp at Tamarack. And the Chanukah Art and Music Show that Hillel Day School used to have at Sinai Hospital in the early 90’s. That was extra special for me because after the show I would follow my dad around to meet his patients who were in the hospital.

mJD: What inspires you to give so much of your time to Federation and NEXTGen Detroit?

Pure and simple, my generation is the future. I feel so blessed to have been given everything I could have needed in my life—most importantly, my positive outlook on being Jewish. I want to ensure that my children grow up in a Jewish community that will provide them with the same feeling, and one that will provide a safety net for whoever may need it. Being a mom, I have the added motivation of wanting to show my children the importance of caring for people outside of ourselves, and in many cases people we have never met and won’t be able to identify, which is the highest form of tzedakah.

mJD: Who are your role models and mentors? How have they helped you reach this level of leadership?

When you come from a family like mine, your mentors are everywhere. My grandparents taught me so much, not only about family, but about service to the community, humility and the importance of living life to the fullest. They are all still here and well, and I continue to push myself to make them proud.

mJD: What is one of your most meaningful NEXTGen Detroit memories?

The first EPIC Event was incredible, and it was considered the birth of NEXTGen Detroit. Nobody believed that there were 700 young Jewish adults around at that time, let alone who cared and could be gathered in a room at the MGM Grand. Marty Maddin and Rachel Wright brought an unparalleled spirit to those early days.

On balancing work and family life 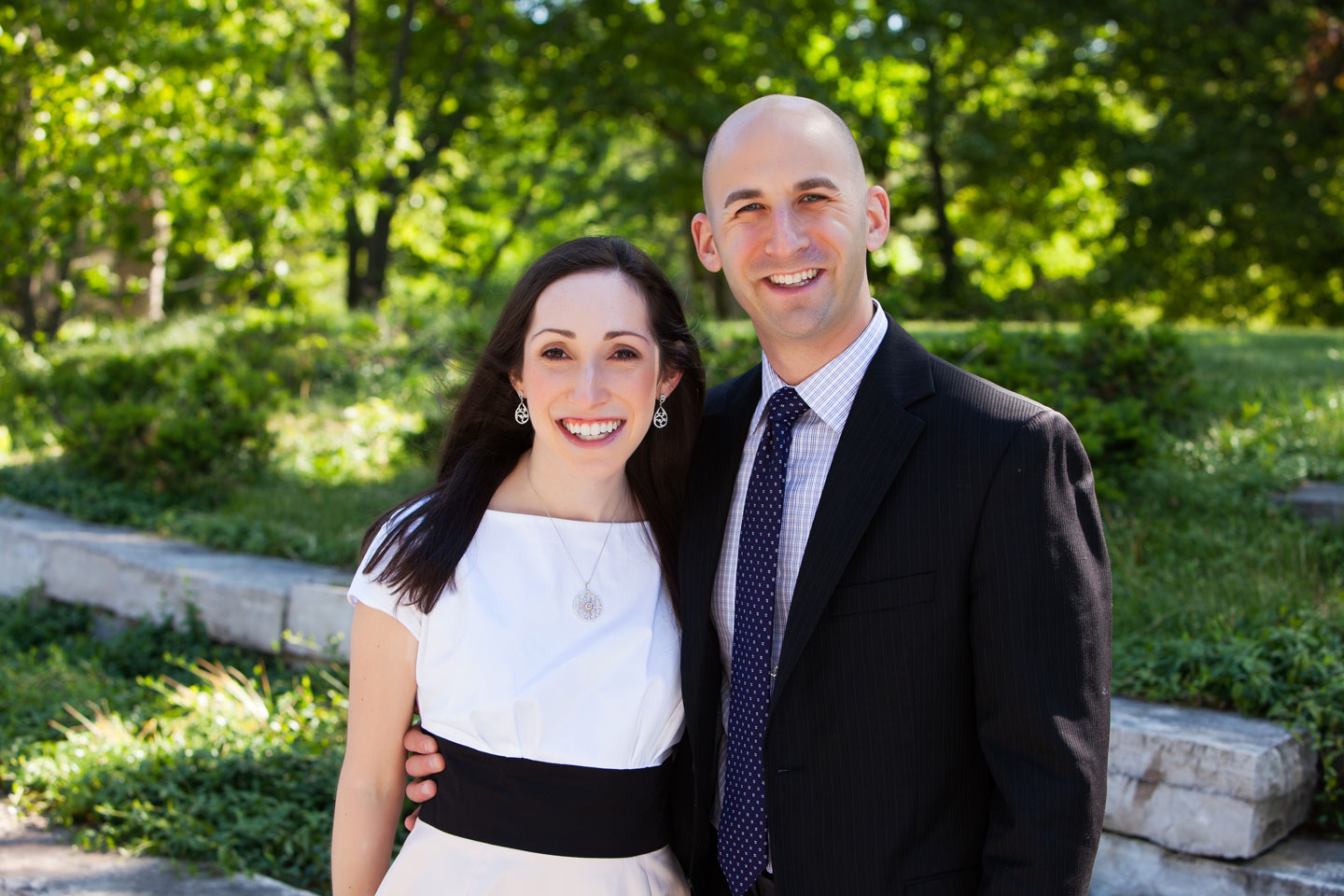 I like to say I’m an attorney working part-time and a mom working full-time. I run my own legal practice, focusing mostly on estate planning and small business litigation.

Adam successfully launched his hedge fund, Beartown Capital Management, in 2015 due in large part to the support of others in this community.

We have two kids, Talia, 4, and Judah, 2. They both go to Hillel Day School’s Early Childhood Center where our experience as a family has been nothing short of ideal.

These days, when I’m not working or volunteering, I’m probably at a birthday party or the zoo — unless it’s date night with Adam or a girls’ night. But I try to have new and different experiences.

We also spend a lot of time with our family. I’m so happy to be back home near my parents, grandparents, and my older brother Josh, who also is very involved in the Federation and NEXTGen Detroit and is currently a VP of NEXTGen Detroit’s campaign.

One thing you never leave the house without:  A phone charger

Guilty pleasure: Driving alone while listening to R & B and belting out the songs

Favorite vacation destination: Anywhere Up North. We love to hike and bike. But I have to say, Old Mission Peninsula, right off of Traverse City, is one of the most underrated places in the world. The hills provide amazing views of the vineyards and the water.

Spirit animal: I’m not an animal person, so I’ll say a wolverine for obvious reasons.

Favorite holiday: Jewish holiday has got to be Sukkot. It’s the perfect fall holiday and a time when we appreciate the simple things. Secular holiday would be 4th of July, and since moving to Huntington Woods, it’s a 14-hour affair.

Best book you read in the last year: The Book of Aron by Jim Shepard

Websites you most frequent: Jerusalem Post (jpost.com), because I like to keep up with the news in Israel. And I’m also a Trip Advisor junkie, not because I travel so much, but because I like to anticipate and plan my next vacation so I have something to look forward to. I’m also a bit of a perfectionist, so reading the reviews helps me to plan.

Where you take people who are visiting from out-of-town: Downtown, from Campus Martius to the River Walk and to a great new restaurant or bar.

TV show addiction: Genius. I love that it’s non-fiction, and you feel like an intellectual when you watch it.

Words to live by:  “It doesn’t cost anything to be kind.” 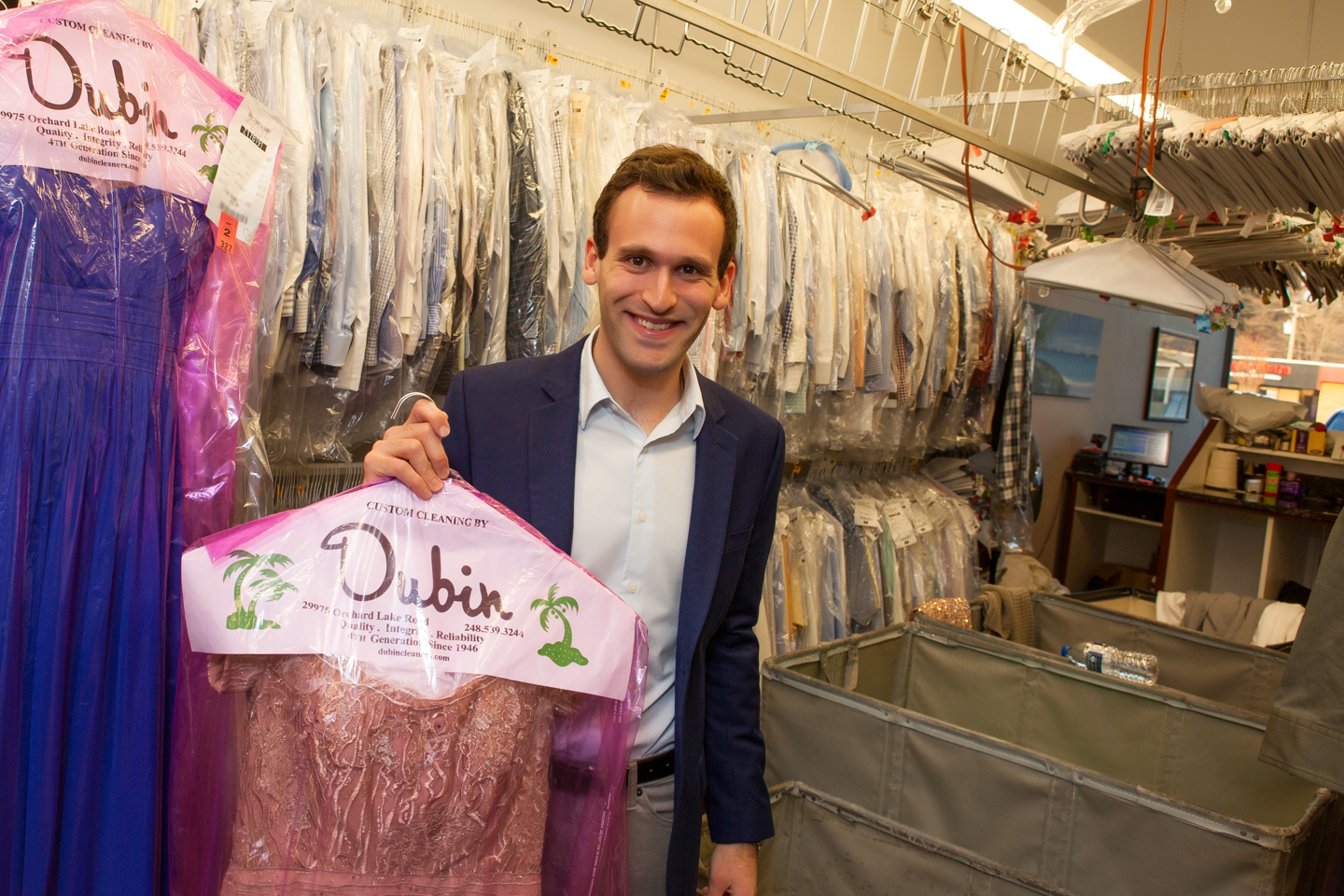 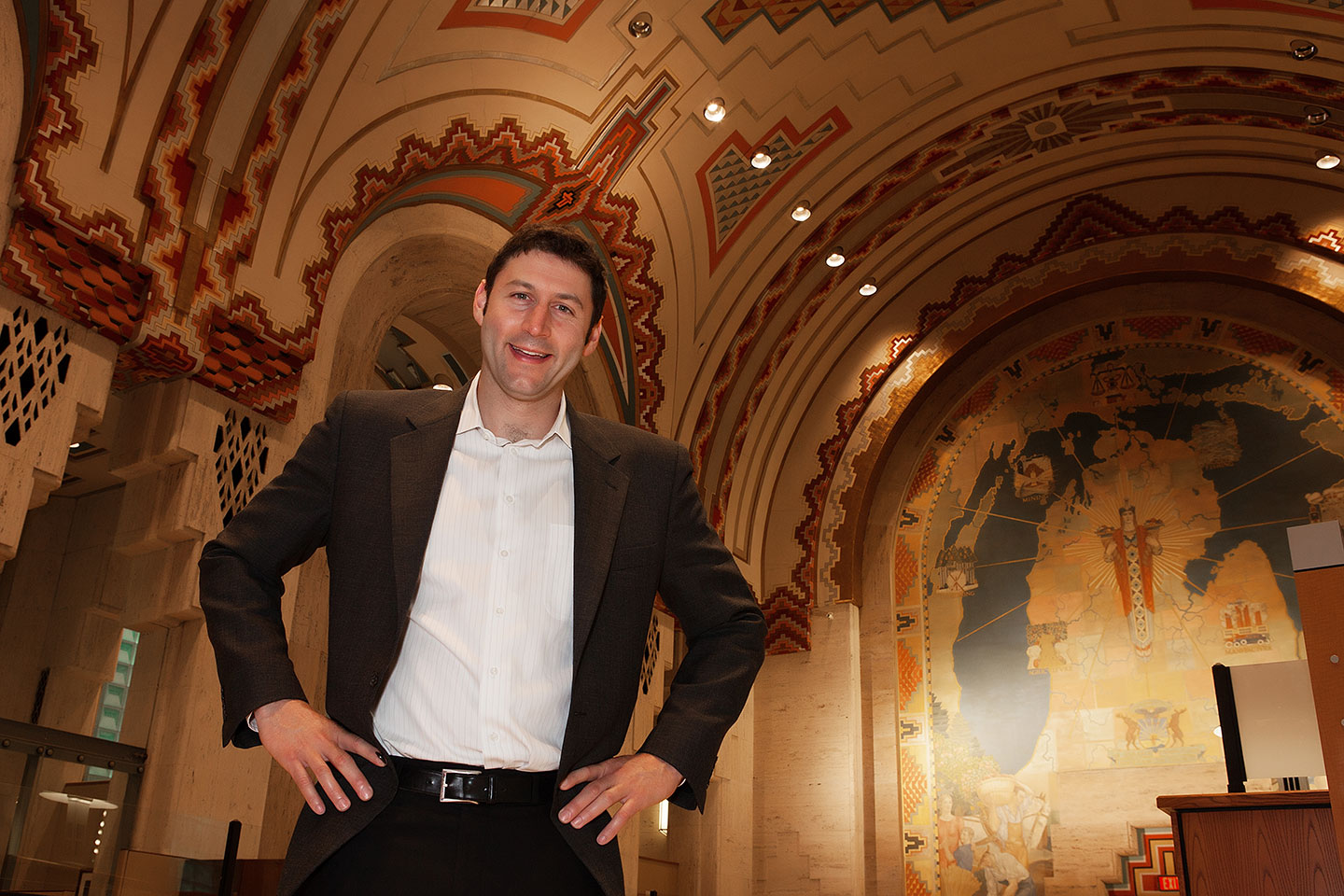