Looking the very picture of eclectic urban chic, Detroit architect Noah Resnick scans the sleek contemporary interior of the new Café Con Leche Nord, on West Grand in the New Center area, where we meet to photograph and discuss his latest design work in the city. “You know, I didn’t really dress for this photo,” he tells me, putting on his jacket for appearance’s sake before I snap his picture.

Serious, thoughtful and multi-talented, Noah is a man of studied answers. In conversation, if it strikes one that he seems to be more of a professor than an architect, it’s because he has found a niche in both the worlds of academia and urban architectural design.

Originally from Miami, Florida, Noah teaches and practices in the city of Detroit as Director of the Master of Architecture Program at the University of Detroit Mercy (UDM) and is a principal of uRbanDetail, an intimate research based architecture and urban design studio that he cofounded with his wife, Melissa Dittmer. Melissa is a current Detroit Revitalization Fellow and the Director of Architecture + Urban Design at Bedrock Real Estate Services.

Noah and Melissa met in Chicago. Both earned their Bachelors of Architecture at the Illinois Institute of Technology, and together focused on urban design in their graduate studies — 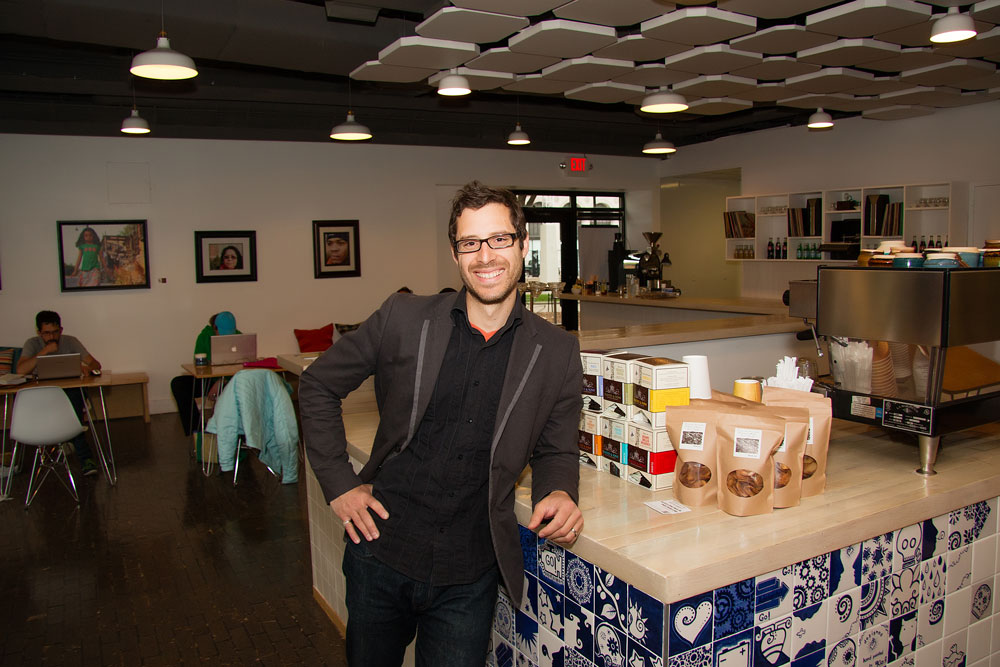 Noah at the Massachusetts Institute of Technology and Melissa at Columbia University. Beyond Chicago, Boston and New York, they have lived in Berlin, Germany, where they worked in the studio of the world-renowned architect, Daniel Libeskind.

From big cities to big ventures

What influenced Noah and Melissa to move to Detroit nine years ago? Over the hum of coffee machines, Noah enumerates the many reasons for the choice.

“Professionally, we wanted to move to a city where we could make a contribution. As much as we loved living in New York and Chicago, those cities were just too big and not a fit for our particular fields of study. The subject of my thesis was Detroit and I already had academic connections here. Melissa’s degree is in Urban Design, focused on issues of post-industrial cities – issues New York City just didn’t have. So we decided to try see what we could do in Detroit where we actually could have some impact.”

It would not take long. As Noah observes, “Within five years after moving to Detroit, we owned a Ludwig Mies van der Rohe townhouse in Lafayette Park. I was a tenure-track professor at a university where I loved to teach. We had our own firm, had built our own projects. And we were a family with two little boys. Had we stayed in New York, it would have taken us 20 years to have what we had established on a fast track in Detroit. And with children, it would have impossible for us to afford to live in the city anyway.”

Noah and Melissa have since moved to Grosse Pointe, though Lafayette Park continues to be Noah’s favorite place in the city, one he considers to be not only unique to Detroit but a “one-of-a-kind location on the planet.” (Mies, himself, lived in an old Victorian apartment in Chicago, and never lived in one of his own designs.)

With professional experience in architectural design ranging from a mall/spa complex in Switzerland, to high-profile Central Artery sites in downtown Boston, to a high-end townhouse building in New York City, Noah has remained firmly grounded in projects well-suited to his interests in Detroit.

In his studio class last summer, he assigned students the project of reimaging the Isaac Agree Downtown Synagogue. “I knew about the RFP and the Board’s plans to renovate. I was familiar with the developments in Capital Park through Melissa’s work with Dan Gilbert’s group. The synagogue, a beautiful building with history, seemed the right size and a perfect client to give students the experience of doing real work in the city.”

As a result of his students’ project, Noah has been recruited to the Synagogue Board to serve in an advisory capacity as plans move forward with the design firm, McIntosh Poris.

At UDM, Noah is now a tenured professor, director of a department with a small faculty, which means a year-round schedule of teaching, writing and research. Selective with his choices, generally he takes on only one project at a time. And each one in alignment with what he wants to be doing with “clients who have a business, a foundation or a project that has some presence in the community.”

One of Noah’s first projects in Detroit – and possibly a turning point – was Roosevelt Park, which he designed in 2008 with a colleague, Tadd Heidgerken (now of et al. design) and Slow’s Bar BQ owner Phil Cooley. “What an experience,” he recalls. “Imagine designing and building this little park in front of the Train Station in Corktown. Now here’s a piece of city park that I can say I had a hand in creating. In New York, Chicago or Boston, there would have been no way, it would never have happened.”

Between pro bono and commercial opportunities, Noah has continued his work with Cooley and expanded his network of urban business owners, artists and developers to complete projects including:

After their collaboration on the Firehouse, Greg called in Noah on the start of his next project. He had purchased a pair of buildings on Gratiot – with no specific idea what he wanted to do with them until half-way through the renovation. “We had to re-do the facades anyway,” explains Noah, “Essentially, the design is based on what was already there. All of the facades on the block were rebuilt at the same time around 1936, when Gratiot Boulevard was expanded. At that time,  Art Deco was the style and, if you look up and down the block, you’ll still see elements of the Guardian Building — a huge influence.”

Standing with Noah against a bright turquoise-painted brick wall on Winder Street, around the corner from Germack Pistachio Company in the Eastern Market, we get a glimpse of his next project – transforming nearly half a city block into a children’s writing workshop.

About three years ago, Noah started doing pro bono work for a 826 National, a network of seven writing and tutoring centers, including the one in Ann Arbor called 826 Michigan located inside the Liberty Street Robot Supply and Repair Shop. Now plans are underway to open a second 826 Michigan. Pending fundraising, work will start in the fall to transform the two-story building into kid-friendly workspace and a storefront designated as “The Detroit Robot Factory.”

From classic and historic to modern and urban, Noah describes his style as collaborative – design that works. “I look at context,” he says, “I don’t believe in subscribing to any noticeable style. There’s no need for me to have a signature. I’m okay with my buildings blending into the context, being well designed, but working with the urban landscape and being appropriate to its position. I feel my contribution is about enhancing the general endeavor, and learning something new in the process. I guess that’s what makes me so passionate about teaching – inspiring creativity in others and bringing out the best in my students and colleagues.”

Jlive is your one-stop hub for all the great events going on in Jewish Detroit. Discovery, classes, celebrations and more… there’s always something for everyone. Visit the Jlive site to… END_OF_DOCUMENT_TOKEN_TO_BE_REPLACED

Jlive is your one-stop hub for all the great events going on in Jewish Detroit. Discovery, classes, celebrations and more… there’s always something for everyone. Visit the Jlive site to… END_OF_DOCUMENT_TOKEN_TO_BE_REPLACED

Jlive is your one-stop hub for all the great events going on in Jewish Detroit. Discovery, classes, celebrations and more… there’s always something for everyone. Visit the Jlive site to… END_OF_DOCUMENT_TOKEN_TO_BE_REPLACED