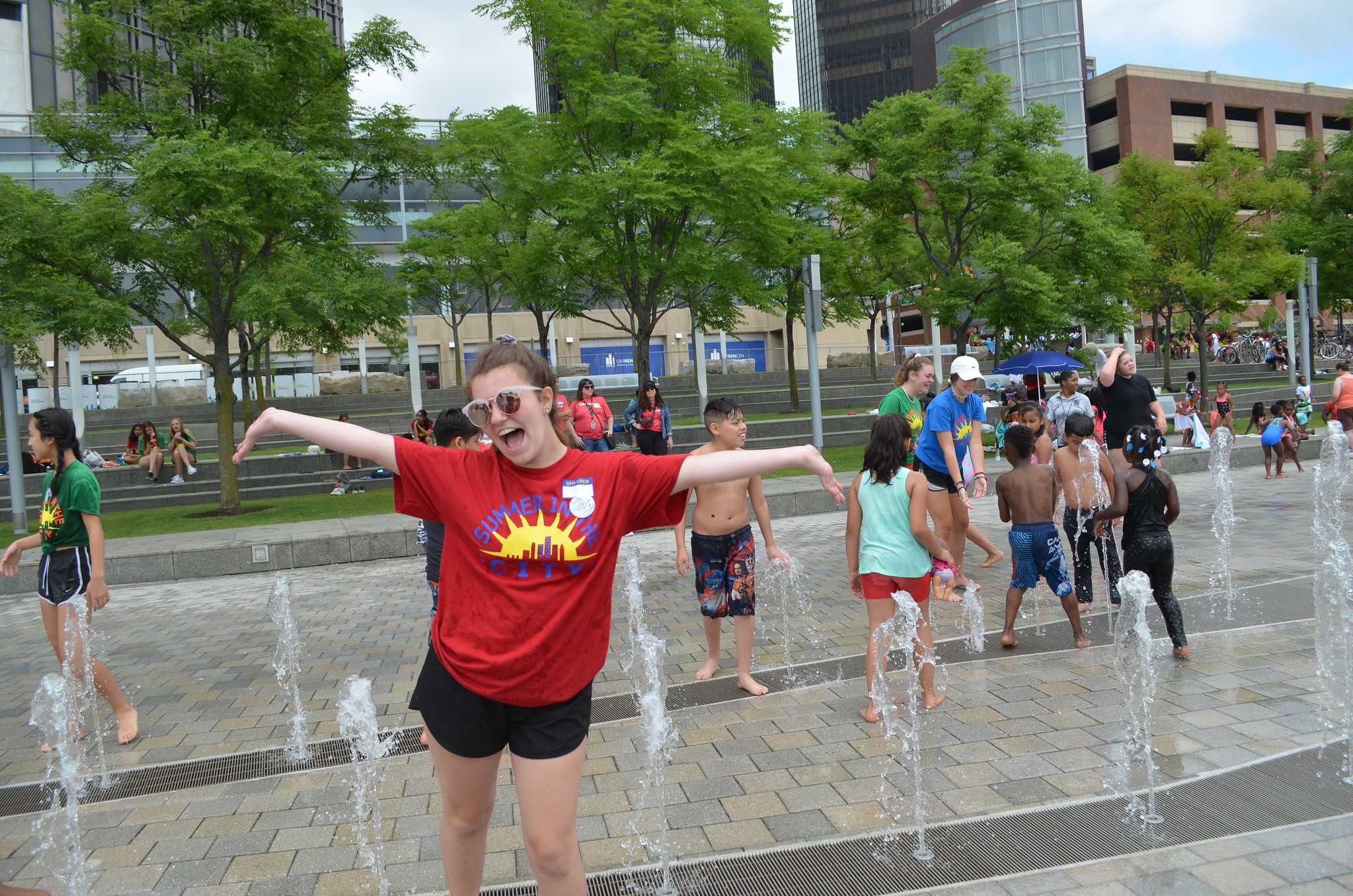 The Gals of Summer

Meet three Jewish leaders helping propel Summer in the City in its 18th season of service.

Like fireworks and complaining about fireworks, Summer in the City returned (much sparkle, minimal complaints) alongside the solstice this year. Summer #18 has seen chai highs, as the program makes it practical, productive and purposeful for hundreds of local volunteers to paint, plant and play. They come from across the region and down the street — some for just a day, others day after day after day — each with an opportunity to be the change they wish to see in Detroit.

Developed over decades as a “do-ocracy,” the Crew consists of over 50 young leaders who design murals, cultivate gardens and plan field trips for campers to bounce around Belle Isle and discover downtown. But mostly they facilitate service experiences that, no matter your background — Благодаря ти to our Bulgarian volunteers! — are fun, flexible and fulfilling.

A newly minted Groves graduate, Tania returned for her 4th Summer as part of the team that co-creates murals in every corner of the city. Paint Crew spends months leading up to the Summer identifying partner projects that will project positivity — and hours every week prepping walls so that anyone can participate “paint by numbers” style.

The corner of State Fair and John R straddles eras, communities and possibilities. The owners wanted something that evoked memories of the Michigan State Fair (if not John R himself) with a constructive feeling for the future of their neighborhood. They graciously rejected the first design that Tania and Riley Montgomery proposed, so they went back to the literal drawing board.

Over the many project days painting the mural with Team Tania, volunteers have gotten to learn about nearby Chaldean Town, sample Dutch Girl Donuts, meet neighbors and greet passersby in the process of contributing to a lasting piece of public art.

“I have always loved Detroit but Summer in the City has changed my relationship with Detroit. Before I started volunteering, I just loved Detroit because I thought it had cool spots and restaurants, but now I love it for the history, complexity and possibilities beyond downtown and midtown.

“Beyond painting walls, I’ve learned so much about different issues that I can educate others and begin to advocate for social justice causes. If not for Summer in the City, I would have overlooked Wayne State. Now, I couldn’t imagine continuing my education and engagement anywhere else.”

Emily got to dig into Detroit’s grassroots through PeerCorps in high school. She stayed at the Summer in the City house for a week during Gesher, an immersive experience designed to expose her cohort to the root causes of issues that marginalize many Detroiters before serving as mentors for the year. At Kalamazoo College, she is majoring in French (en route to studying abroad in Clermont-Ferrand) with a concentration in Jewish Studies and a term on the Hillel board.

When Emily signed on to be a co-director of Project Plant, she was quick to suggest Eden Gardens as a prospective partner. Blooming with inter-generational energy, even as City Airport down the street goes to seed, Eden Gardens had been Emily’s PeerCorps site. She knew that it would be a place volunteers could make and impact — and that working with Chava and her neighbors could make an impact on them.

“Two years after PeerCorps taught me about Jewish history and Jewish values in Detroit, I’m back in the city and I get to pick up right where I left off. When I was working with Eden Gardens in high school, they were looking to build a playground and plant a fruit orchard across the street. This summer, I got to be there for the grand opening of both. It’s so rewarding to see projects like that come to fruition.

“Even working for a secular organization, I feel deeply connected to the Jewish history here. I moved into the Summer in the City House only to learn that my great aunt was the principal of Maybury Elementary School down the street for decades. My family used to live and work and play in the exact same areas that I am.

“I’ve experienced a new connection to Judaism through Summer in the City, drawing from my Jewish identity to work in solidarity with people from all different backgrounds.”

After her junior year at Farber Hebrew Day School, Aria Peterson had the option to do a paid internship as a member of the Jewish Fund Teen Board. She knew she didn’t want to sit at a desk all day, so she took a chance on Summer in the City. Prior to the summer, she participated in a training through Playworks and brainstormed games and craft ideas with new and returning Camper Coordinators.

Last year, Summer in the City helped Highland Park mark its centennial with a mural on their recreation center and a celebration at Reggie McKenzie Field. Based on the enthusiastic community response, the rec center created a new day camp, with programming provided by Summer in the City. Campers have tie-dyed T-shirts, collected books for their home libraries and gone on field trips every week.

“I’m the 4th generation of my to live in the same house on Webster Street in Oak Park, one mile (plus one block) from the city limits. But I can admit it — I used to be afraid of Detroit. More based on it being unknown than unsafe. This summer has changed my entire perspective on Detroit and its relationship with the suburbs.

“Before Summer in the City, I had never worked with kids before. I am the baby of my family, so it has been a growth experience to lead campers and volunteers. At first, it was definitely out of my comfort zone. Because I had to work to get comfortable, it’s easy for me to spot volunteers who are uncomfortable and help integrate them into our activities.

“My family is making Aliyah in a couple of weeks. I didn’t really know what I was signing up for with Summer in the City. Now I know that I will carry these experiences with me to Israel.