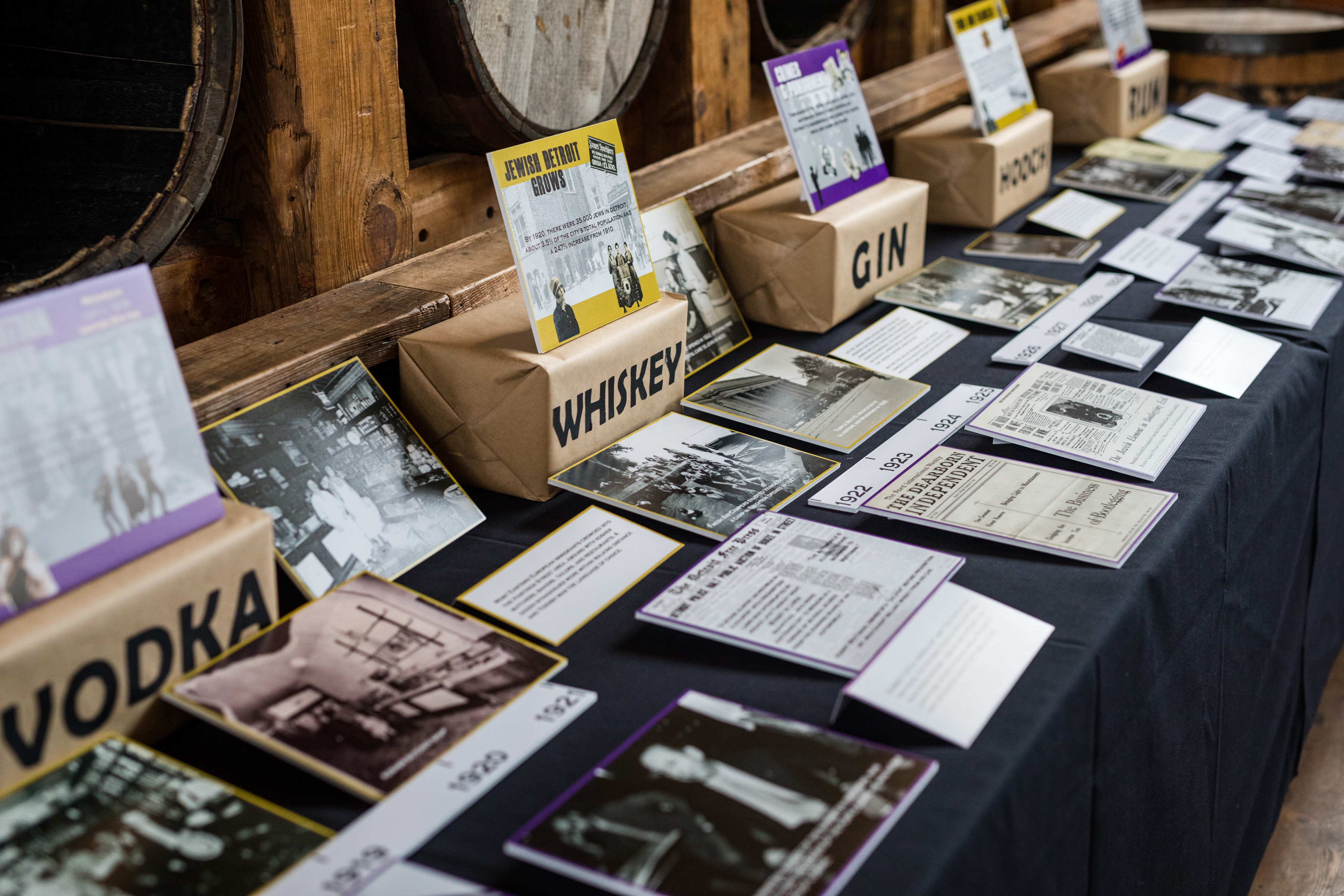 True or False: Prohibition in Michigan began on January 17, 1920.

False! While prohibition in the United States began on that date, one year after the 18th amendment was ratified, Michigan was already dry…legally speaking.

On May 1, 1918, Michigan was the first state to enact a ban on alcohol due to an amendment in the state constitution. This gave bootleggers more than a year to perfect their trade. By the end of the era, smuggling, manufacturing and distributing liquor was Detroit’s 2nd largest industry.

Opinions on this time-period vary. It has been romanticized in the movies, scrutinized by historians and holds fascination by the public at large. The Jewish view of Prohibition’s effect on Detroit is often colored by stories of the Purple Gang. Whether you like or hate them, are intrigued or offended, the Purple Gang often dominates the story.

A new program by the Leonard N. Simons Jewish Community Archives and the Rabbi Leo M. Franklin Archives of Temple Beth El looks at the era through a new lens: the significant events of Jewish Detroit that occurred simultaneous to episodes related to prohibition.

Designed by archivists Robbie Terman and Laura Williams, the program includes both a presentation of anecdotes about Jewish Detroit and prohibition and a related exhibit of photographs and documents.

“Even though Detroit, and specifically Detroit Jews, had a huge role during Prohibition, the topic had been a bit off-limits in the past because people were not totally ready to shed light on the ugly parts. But Robbie and I thought we could start to tackle the topic slowly, with stories of the average Detroiter, and mix it with the infamous groups we always heard about growing up,” says Williams.

The exhibition tells three stories: what happened in the Jewish community from 1918-1933; major events related to prohibition during the same years; and, finally, how those two stories intersect. “Once we started digging, it was amazing how much material we found in both archives that helped tell the story of Jewish Detroit during Prohibition,” Williams continues.

Take, for example, Henry Ford’s virulent anti-Semitic paper, the Dearborn Independent. While Rabbi Leo M. Franklin of Temple Beth El was preaching the repeal of the sacramental wine clause, Ford was publishing parts of Franklin’s own sermons and twisting his words to blame Jews for taking advantage of the law. Ford’s paper helped fuel further anti-Semitism that was already inflamed by the criminal exploits of the Purple Gang.

The exhibit further showcases stories of lesser known Jewish bootleggers, studies the growth of Jewish organizations during the 1920s, and continues into America’s descent into the Great Depression and its role in the repeal of prohibition. And, finally, how Jewish concerns turned from home to overseas, as Adolph Hitler was appointed chancellor of Germany on January 30, 1933, just months before the 21st amendment to the constitution was ratified, ending prohibition.

The program was initially conceived as a happy hour to engage a younger generation with history and the Jewish Detroit legacy. Teaming with Federation’s NEXTGen Detroit, the Franklin and Simons Archives, with support from the Marjorie and Maxwell Jospey Foundation, debuted Risky Whiskey: A History Happy Hour in April 2019. Fifty people filled The Oakland: Art Novelty Company, in Ferndale, to hear the presentation and view the exhibit, as well as sip on the evening’s signature cocktail, crafted by award-winning bartender Chas Williams.

Even before the History Happy Hour event, it was evident that the subject matter was of interest to a variety of groups. Williams notes that History Distilled brought the same content to Federation’s Maimonides group while adjusting to their specific needs, adding, “History Happy Hour was a way for us to introduce the community to the amazing possibilities and mysteries uncovered in the archives in a way that is engaging, experiential, and yes – even fun. It has been amazing to see how the program can be translated to fit different groups throughout the area.”

The Jewish Detroit During Prohibition program is available for rental to any organization looking to bring a unique spin on history to their event. For more information, contact Robbie Terman at terman@jfmd.org or Laura Williams at lwilliams@tbeonline.org.