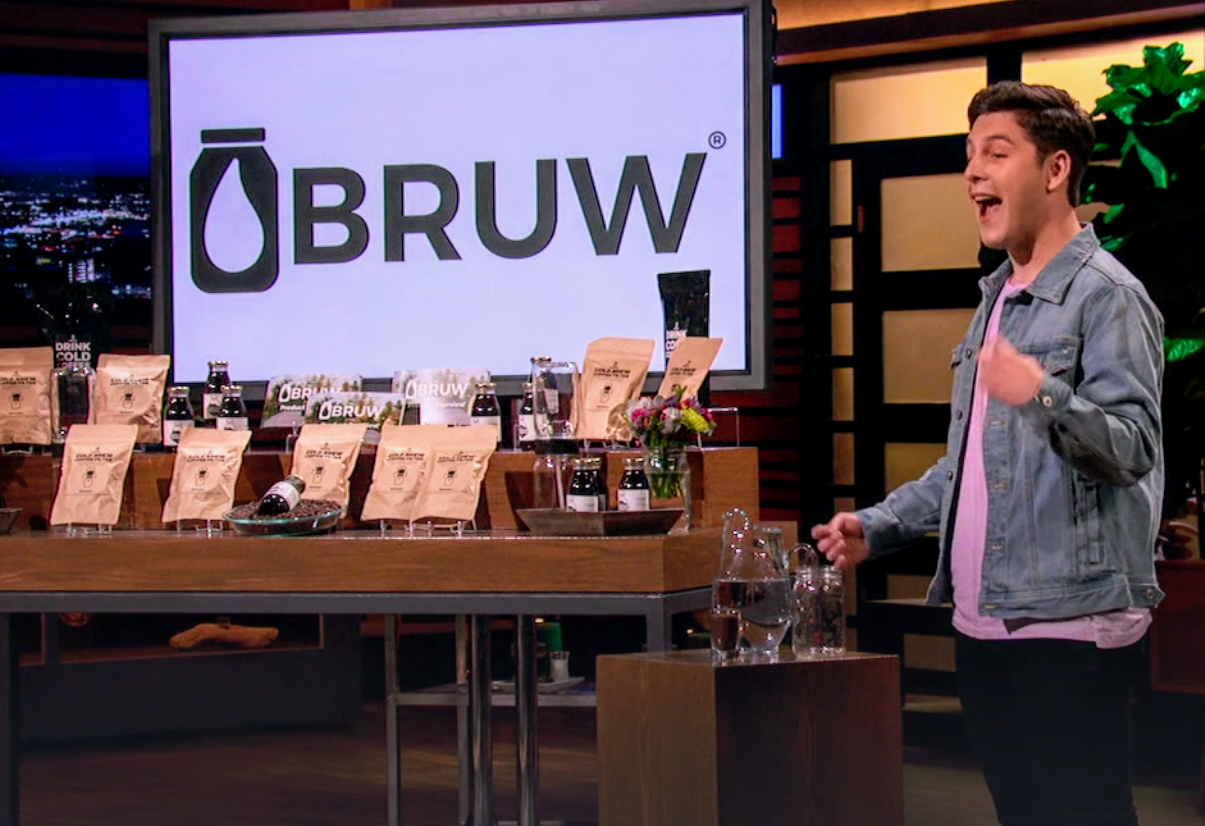 This. This is Max.

This is the biggest moment of Max’s life.

This is not an audition for the role of Kenickie in the musical Grease.

This is a more flattering picture of Max.

This is not the picture I meant to use. This is an honest mistake.

This is a punim.

Max. Max is a young man. Max is an old soul. Max is an enigma wrapped in Ikea instructions for how to assemble Entreprenør in 18 short years. Max has the hubris to believe he can disrupt a $225 billion industry and the humility to know that he didn’t get here on his own.

Here is the Shark Tank Announcer saying, “and chasing their dreams…”

Max’s palms were sweaty, knees weak, eyes were blurry
Mom’s lipstick on his denim already, Charlotte Tilbury
All shpilkes, but on the dais he won’t want to hurry

You better find Young Max in flashbacks, the moments
You know that, you better ever help him grow
He only gets one shot, do not mess your pitch for BRUW
This opportunity builds upon a lifetime…

“My name is Max Feber and I’m from Detroit, Michigan.”

Max is home for spring break during his freshman year at Babson College. It’s cold in Downtown Detroit and he’s wearing a T-shirt. Ben Falik is holding his phone and a microphone and Max’s jacket. Max did not get run over by any cars arriving at or departing Checker Bar. Instead, he got the sniffles and the attention of ABC producers.

“I’ve perfected a new way to make cold-brew coffee at home without the need for complicated or overpriced equipment. When I was just 15 years old, I fell in love with coffee.”

Necessity is the mother of invention as Max, then a member of the Teen Service Staff at Camp Tamarack prepares a cup of hot coffee in the camp bathroom.

Max insists it was the best cup of coffee he ever tasted, though focus groups consistently rated BRUW more marketable than LOO.

“One day, I stumbled across cold-brew coffee and I was dying to try it … it’s a type of coffee that’s made in cold water instead of hot water. This doesn’t extract the acidity out of the coffee bean so it’s smoother, it’s sweeter…”

Max is supposed to be packing up wilderness gear for a Western Trip hike into Yosemite, but he’s at Burning Man. Or, rather, he’s in a hammock adjacent to the wilderness gear, reading Cory Doctorow, whose book Homeland begins and ends at Burning Man, and who extols a rudimentary way of making “astounding cold-brew coffee” with a nut milk bag and plastic pitcher.

Someone else packs up the gear.

“I knew there had to be a better way. So I ran into my garage, I ripped a screen door off the wall, I grabbed a hot glue gun, some mason jar lids and, after some trial and error, the first prototype of BRUW was born.”

Lawrence Tech Professor Donald Reimer gives his dual-enrolled Frankel Jewish Academy students the first assignment in their entrepreneurship class: come up with a concept and bring in a prototype next week. The idea for cold coffee had already been percolating in Max’s mind. Now he has a deadline.

“So we’re selling it online right now. Big-box retail is what we’re aiming for.”

Michael Goldberg, Summer in the City co-founder, knows Ben Falik. Michael Goldberg is not surprised when Max Feber and Ben Falik set up shop in the lobby of the Jewish Community Center after school to shoot the first BRUW video.

“Obviously we’ve come a long way since then.”

After a successful Kickstarter campaign, Max has got some nerve. He can spiel, spin and sell BRUW in his sleep.

“How long have you been watching Shark Tank?”

“Since I was about 8 years old … Watching Shark Tank, I learned how to run a business. You see entrepreneurs stand here and they’re doing something that might not be the smartest and they just get broasted for it.”

Five years to the week before Max will appear, composed and caffeinated — as with most Sunday nights in the Feber family full house — Shark Tank is on. On this fateful night, fellow Bloomfield native (one-time soccer teammate of Ben Falik and camper of Max’s Mom) Craig Isakow gets attacked by the Sharks, who make chum out of this chum’s $9.99 webcam blocker.

“I’m in college. I just finished my first year at Babson College. I’m majoring in business.”

Max has spirit, yes he does. Max’s appearance on Hatched, a nationally-syndicated TV show, is a spirited affair. But Max doesn’t want to be at school in spirit only. So after shooting the show, he flies back in time for Spirit Week, albeit not on Spirit Airlines.

“My patent was granted 5 days ago.”

Years before becoming a patent holder, Max is a PeerCorps mentor with Repair the World. Through PeerCorps, Max brings his b’nai mitzvah mentees to the Mt. Elliott MakerSpace at Church of the Messiah on East Grand Boulevard, where they tinker and do science experiments with Detroit students.

“Why do you want to sell more to make less? Instead of spending the money on new molds, you can probably push that into advertising.”

Max loves the grind. Max slays screen doors. Max travels through what’s left of the door to build a fire in his backyard and roast beans the way he watched Ethiopians do it in Israel. Max is java jiving.

But Max is at a loss for what to call his creation. Enter Max’s Mom. By the transitive property of Jewish parenthood, Max’s Mom would already receive the credit for her son’s accomplishments, as measured in degrees Kvelvin. Max’s Mom says, “Why don’t you change the ‘e’ to a ‘u’?”

Max’s Mom, iPhone and maternal instinct charging, captures a screenshot of her due diligence for parental posterity.

First, there was the Moki Doorstep couple, who offered 20% and sold the whole fish to Daymond Shark. Then, there were the Sproing Fitness fellows, who couldn’t get anyone to bite on their interval workout machine. Before there was the TushBaby lady, there was Max.

There was Max saying “yes” without a hiccup or a hedge. There was Max getting an audible “oh!” from Lori Shark.

There was Max hugging it out with his new BRUW Bro and business partner, Mark Shark.

“To finally have a deal with one of the Sharks I’ve been watching since I was a little kid and aspiring to … is just unbelievable. It’s a dream come true.”

What’s the distance between dreaming and reality? For many of us, it starts with a quotidian cup of coffee to ferry us through each early morning fog into the bright light of a new day.

For Max, a never-leave-well-enough-alone vision for that very cup of coffee — standing on his own two feet, on the shoulders of a community — brought a journey of miles and trials, of hours and dollars, of screens and beans to those single steps from shark tank to sea shore.

Tune in to ABC on February 10 at 9:00PM to see a rebroadcast of Max swimming with the Sharks.