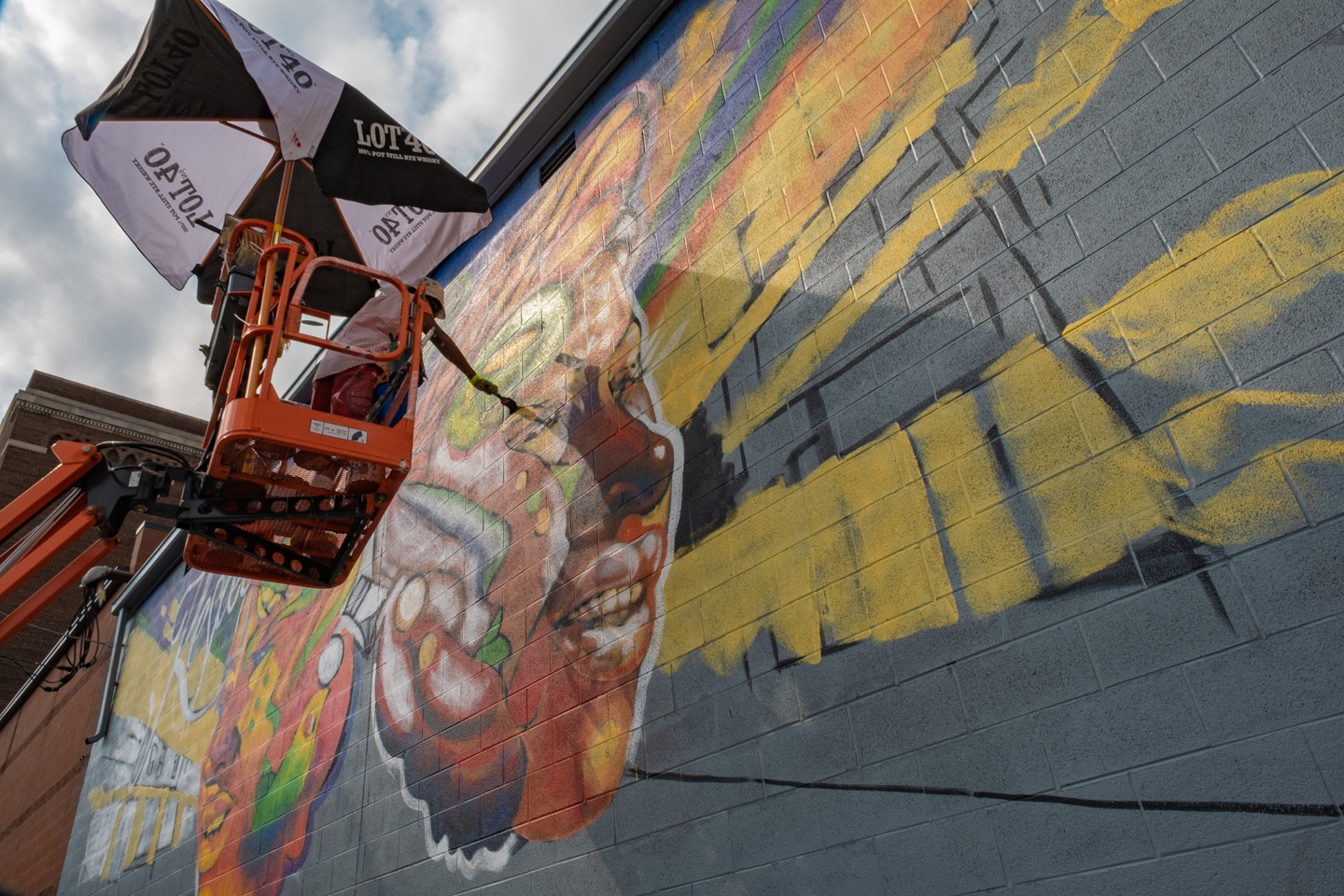 A ten-day festival to paint the town. More than 50 artists at work and play on the streets of the Eastern Market. One brilliant stroke of creative marketing genius for the city of Detroit. This was the 4th Annual Murals in the Market, a live arts event hosted by 1xRUN (“one-time run”) in September.

With its consistent celebrity-loaded line-up of artists, including many locals, Murals in the Market has built its reputation as a premier event drawing international notice to the city. Recently named by Smithsonian magazine as one of  “The Top 5 Mural Festivals in the World,” Murals in the Market  continues to enhance the Eastern Market as a must-see destination and living proof of the district’s transformation and continuing economic development as a magnet for fine art, foodies, neighborhood regulars, as well as tourists from around the world.

To date, 1xRUN and the company’s fine art gallery, Inner State, have curated and produced over 150 murals in Eastern Market alone, as well as many more murals strategically placed throughout the city of Detroit. 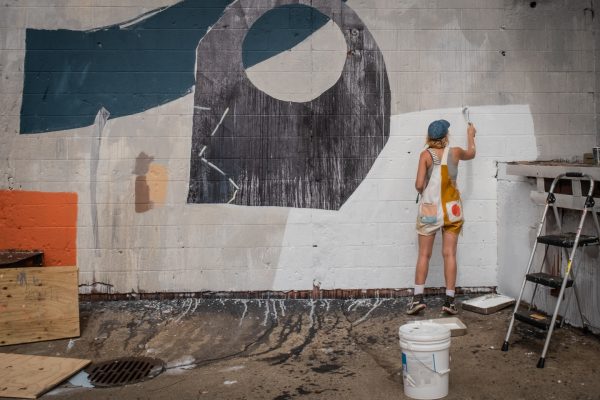 Detroit-based artist Ellen Rutt makes bold mixed-media paintings, installations, murals, and wearables. Her new Mural in the Market can be viewed in the alley between Orleans and Riopelle Streets

From its grassroots start-up in 2015, Murals in the Market has solidified an impressive roster of sponsors. With the promotion and financial support of presenting sponsors including the William Davidson Foundation, the Knight Foundation, Quicken Loans Family of Companies, Eastern Market Corporation, the 1xRUN team now works year-round on the event from its new headquarters near the Heidelberg Arts Project at 2905 Beaufait Street in Detroit.

Fine art and feet on the street 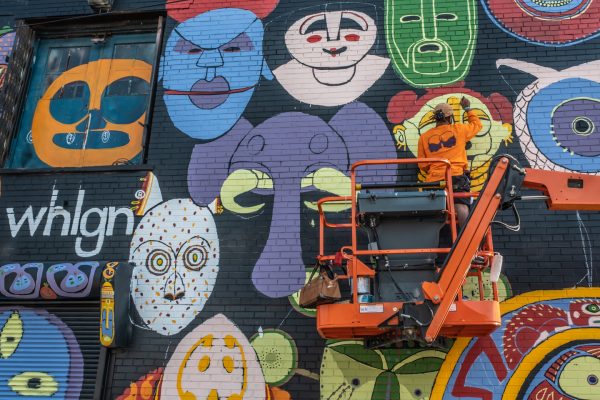 As colorful as are the artists at work brushing and spraying gallons of paint on bricks and concrete, so too are the people we meet on the street, those living, working and playing in the market district and its neighborhoods. Here we meet a house painter-poet, on hand to assist Detroit muralist Charles Chazz Miller with “Respect,” a portrait of Aretha Franklin in the alley between Riopelle and Orleans Streets . . . There’s Cassie, a graphic artist and  Lexus Velodrome cycle racing enthusiast, just casually pedaling by. There’s Derrick on skateboard, testing the new Community Push pop-up skateboard park installation in the alley between Riopelle and Orleans streets. And there’s Linda – “Feet on the Street” lady, inveterate market tour guide and historian. 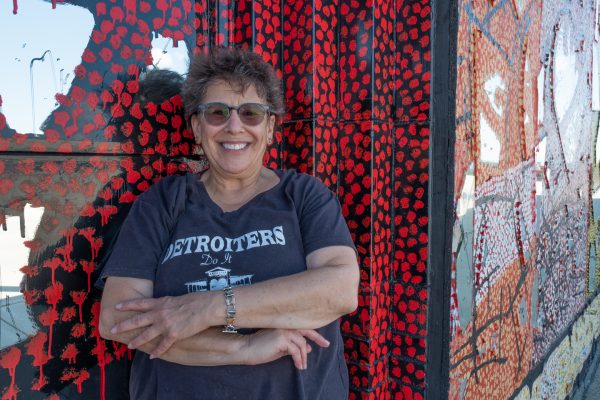 Photo op  with Linda Yellin, “Feet on the Street” tour guide at Olayami Dabls’ eye-popping  mural of mirror-constructed for Murals in the Market 2016 along Wilkins Street.

A retired social worker, resident of Detroit’s Lafayette Park and a self-described Eastern Market groupie, Linda Yellin has been conducting city tours and market tours year-round for nearly two decades. What started out as a hobby and a call for volunteers to run tours in celebration of Detroit’s 300th Birthday in 2001 turned into a business for Linda in 2007. Today, she runs private and group tours for schools, universities and visitors of all ages from all over the world.

“From street art to fine art, murals in the Detroit Eastern Market have always been here,” Linda said. “The market is 126 years old, so you might imagine that the produce storefront would have a watermelon painted on the building, the slaughtering house for the chickens would picture a chicken at its entrance, and so forth. Back in the 60s, Alex Pollock, a young Detroit architect working as a city planner, was asked to create murals that would give the market some special designation. He designed the market’s iconic Funky Chicken, the “VegetaBull” and the market’s landmark mural, the 6,500 square foot forklift with carts of produce along I-375 on Gratiot. That mural, originally painted in 1973 by Ed Lee, was restored to its full glory in 2014 by Detroit artist and DIA educator, Vito Valdez.”

So much to see

So many fine, fine artists to meet during the Murals in the Market festival . . . myJewishDetroit stopped to chat with just a few. 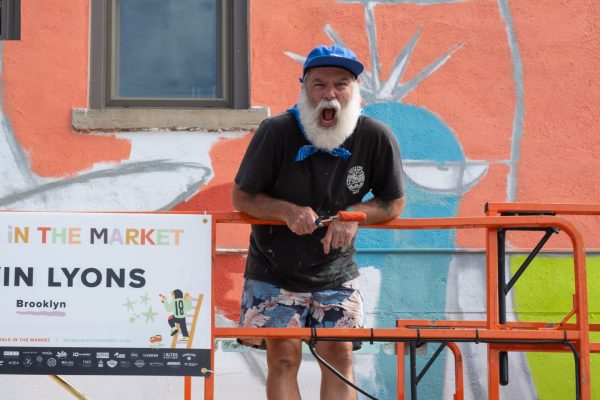 Never a dull color, Kevin Lyons paints with vigor and humor and greets the camera lens with his signature roar.

Creative director, designer and illustrator Kevin Lyons returned to Detroit for Murals in the Market for his third year. To date, his humorous Monster characters have appeared on the walls in Milan, Paris, Tokyo, NYC, LA, Detroit, Honolulu and D.C. With a body of work exhibited and published worldwide, Kevin also has created products with Nike, Adidas, Converse, Huf, Girl Skateboards and others. 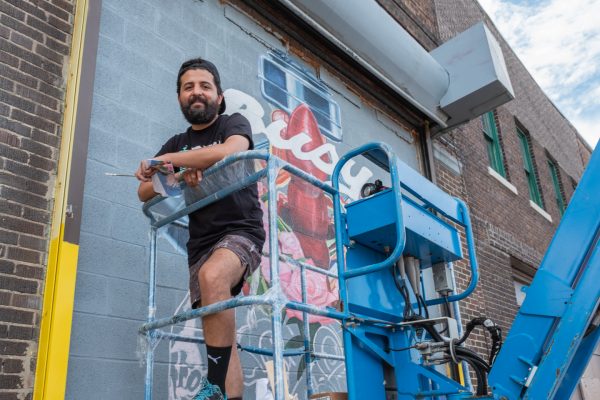 “Ever” at work, near completion with his new mural in the market, aptly titled “Busy.” 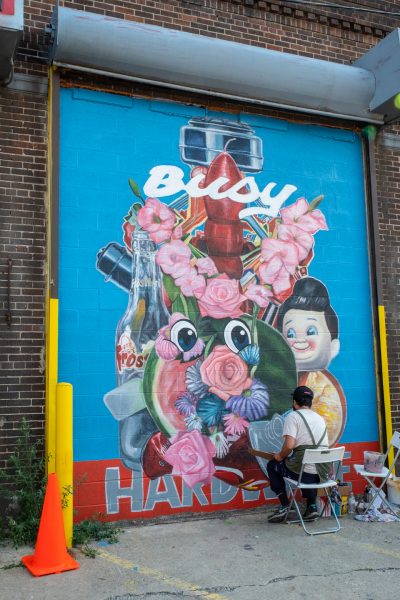 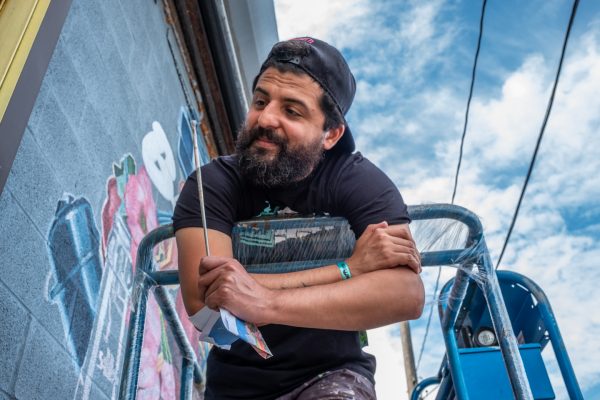 I do research for my work in an anthropological way, drawn to objects. My composition, “Busy” is a collection of found objects in the Market. There’s a vintage Ford motor, a candle I found in a shop, a Faygo bottle, a watermelon from a produce shop . . .  the Eastern Market reminds me our of festivals in Buenos Aires… so much life, so much to see!

“Using a blend of surrealism, spirituality and politics, Argentinian street artist Ever paints murals that cushion social criticism in a flurry of bright colors, dreamy, cloud-like forms and whimsical characters. Ever has an active mind hungry to assemble his philosophical ideas into paintings. In unfamiliar places, he begins to observe and digest the social phenomena around him, eager to create new meanings out of ubiquitous visual currency.” (Artist statement reposted from 1xRUN) 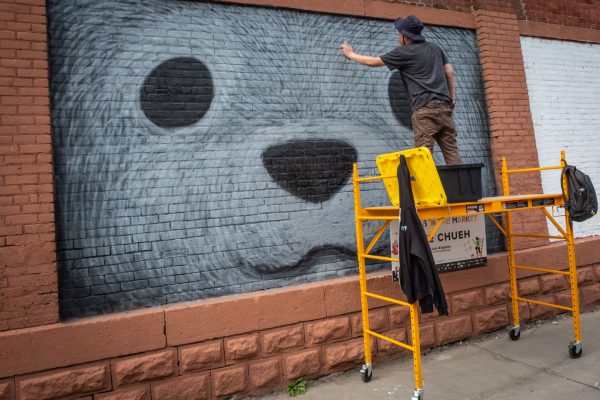 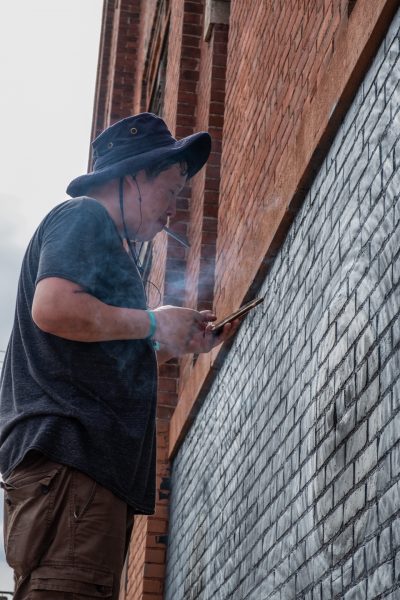 “Every time I come to Detroit, I just fall more and more in love with the city The people are fantastic, the food is delicious. The city keeps evolving and I’m so happy to have a little something that is part of it. My work is generally a bit cynical in its narrative, but here in Detroit, I felt I should do something a little more positive and upbeat to complement the overall mission of the market.”

Known in the top ranks of the L.A. art scene, Luke Chueh employs minimal color schemes, simple animal characters and style that balances cute with brute, walking the fine line between comedy and tragedy. Working with 1xRUN for more than a decade to produce prints and limited editions, Luke was invited to Murals in the Market in the inaugural year of the event and returned to do his second mural this year. 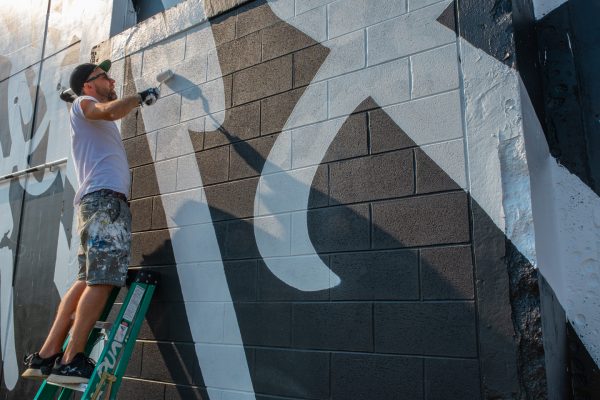 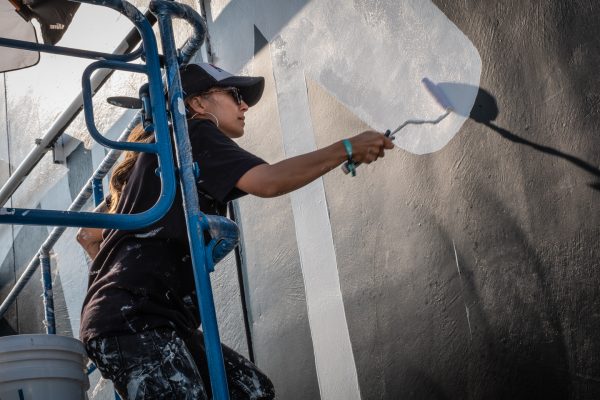 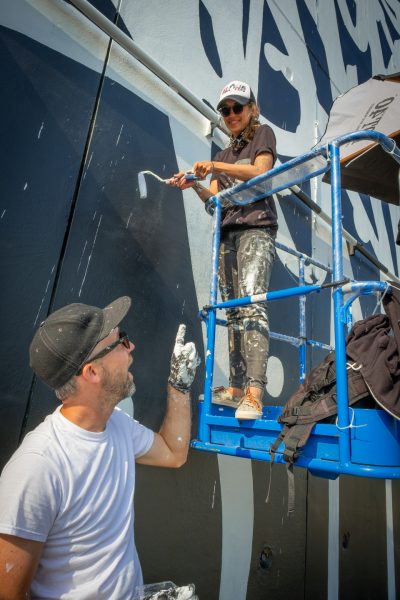 “The title of the wall is ‘Forever Forward.’ In my personal life, that phrase has been ringing in my head lately,  just to keep my focus forward and moving through the chaos of what seems like a crazy time in our world. But coming to Detroit and having this opportunity to paint this wall, seemed like the most fitting message for a city that’s been through a lot and now moving forward.”

Bisco Smith (working in partnership with his wife and business manager, Jasmine) is an American contemporary urban artist whose work is characterized as a blend of graffiti deconstruction, abstract gesturalism, action painting, and style writing. His technique involves energetic, expressive brushstrokes that reflect the flow of music and translates the consciousness of the moment into painted lyrics and abstract black and white works of art. 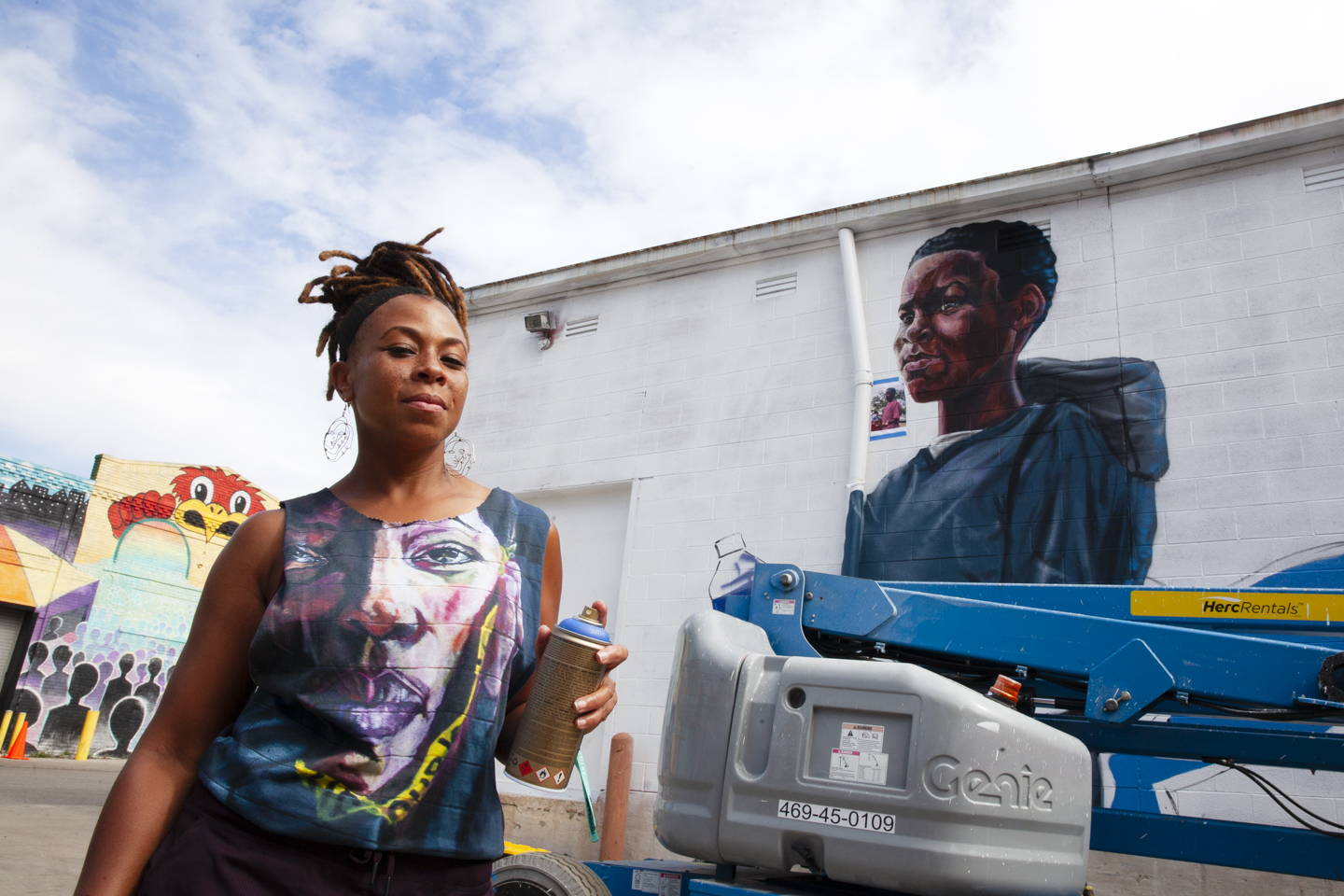 Detroit artist, Sidney G. James earned her BFA from the College of Creative Studies in 2001and began her career as an Art Director for Global Hue Advertising Agency in Detroit primarily creating print and television advertising for major international brands. In L.A., she worked as resident artist for the ABC Family show, Lincoln Heights, creating all of the artwork for the set and lead character, Cassie, a prodigal artist. Back in Detroit to join the creative movement here, she has had a spot in Murals in the Market for four years in a row. This year, her work was commissioned by the Detroit Lions, in partnership with the Market “Eat Up and Meet Up.”

About 1xRUN
Based in Detroit, Michigan, 1xRUN (“one-time run”) is a leading publisher of fine art editions and online destination for original art, showcasing limited edition prints, original artwork, books and exclusives from some of the best-known and emerging names in the new contemporary movement. With collectors in over 100 countries, 1xRUN  has published more than 1,300 editions since 2010.

(Excerpts of artists’ bios and statements reposted here with the permission of Murals in the Market 2018.) 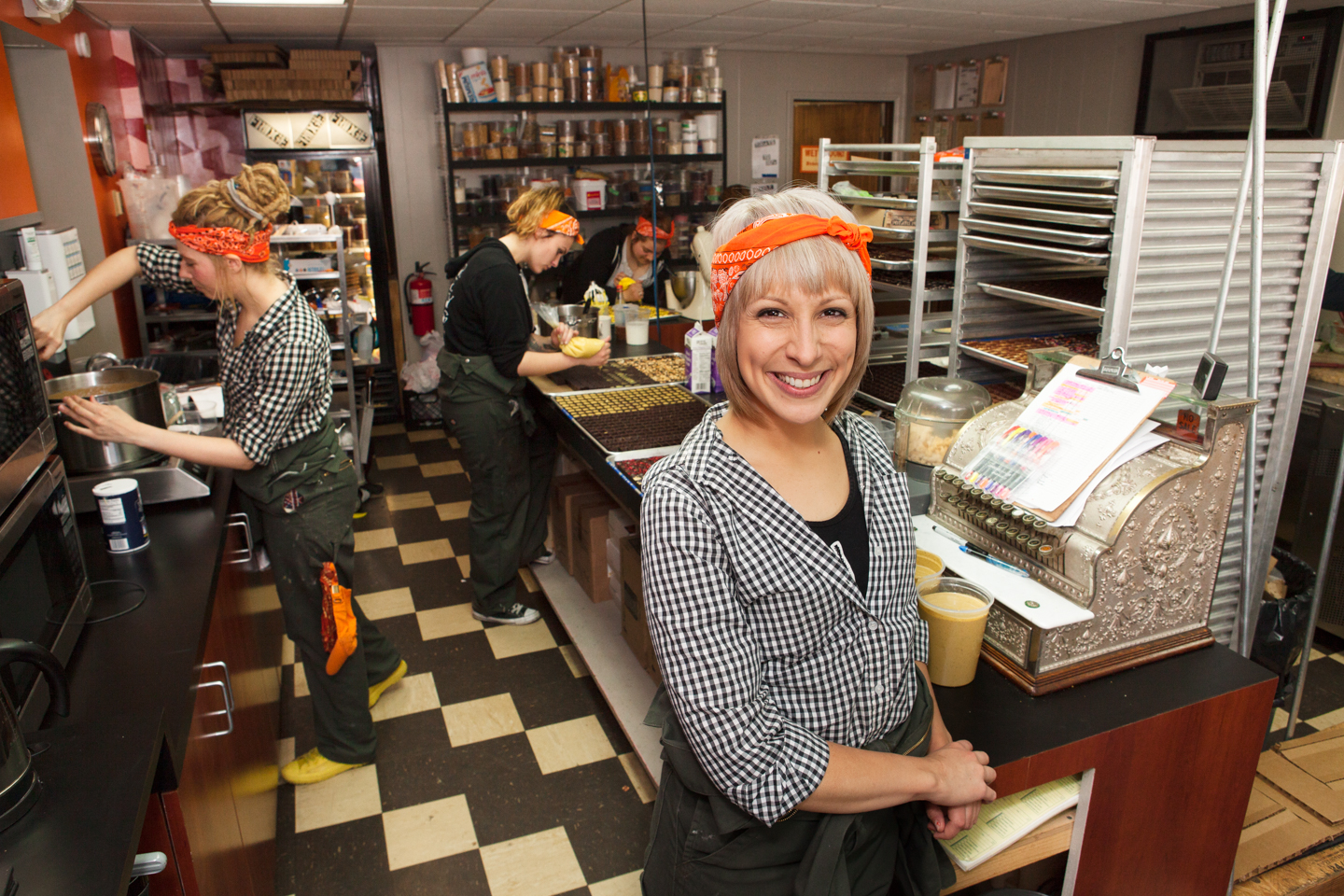 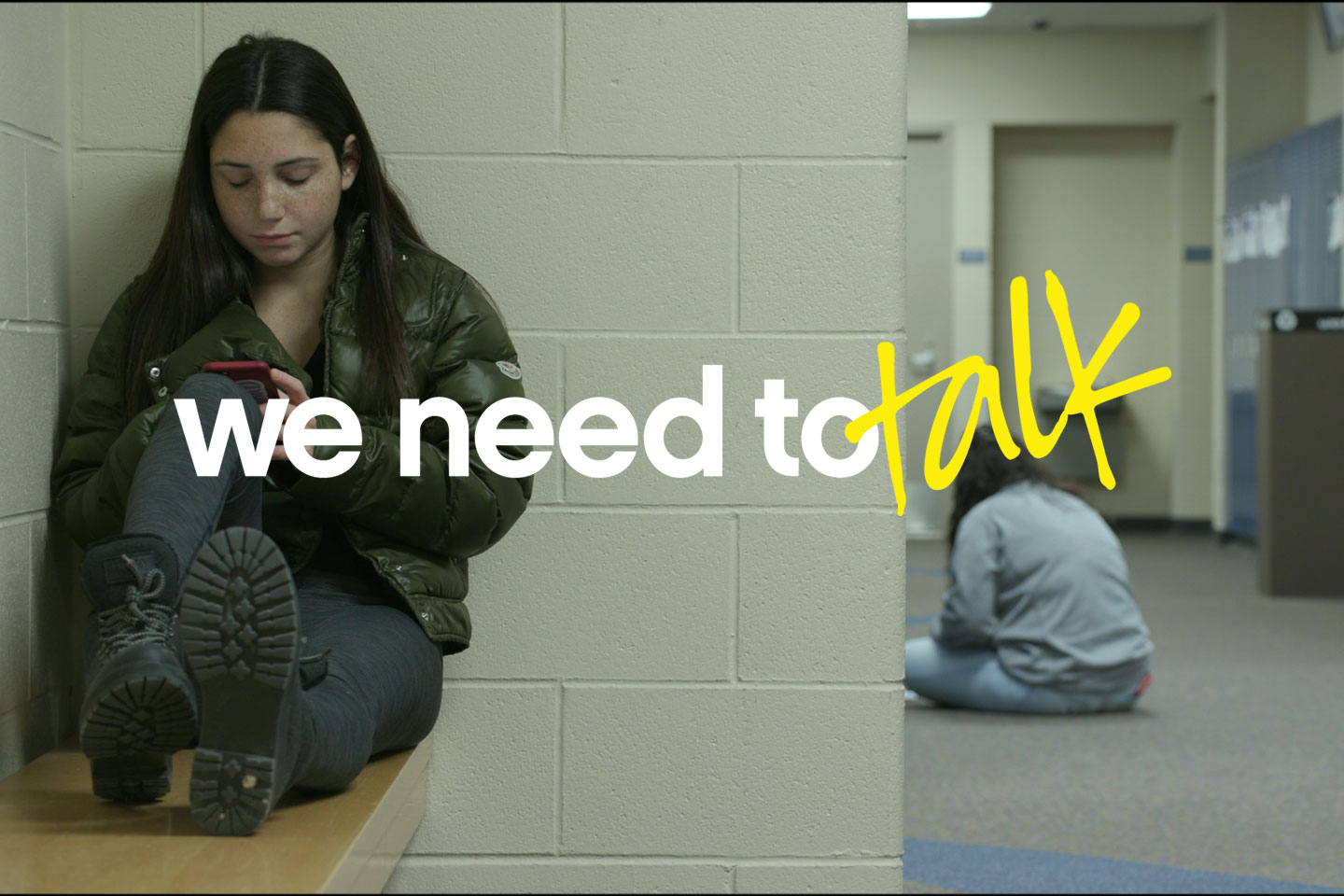