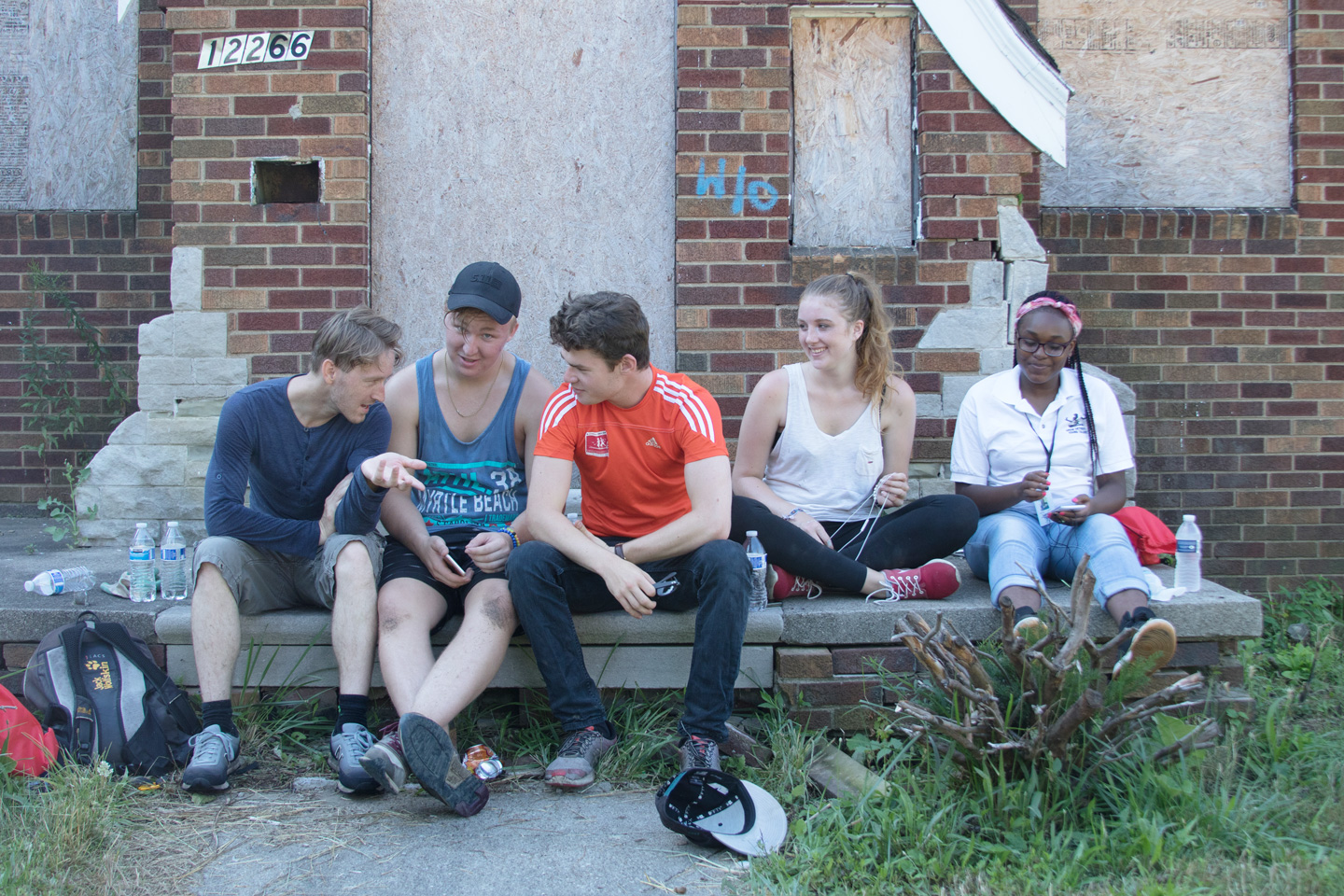 It’s 90 degrees in the shade on an August morning, a perfect day for growing tomatoes at Eden Gardens, a neighborhood project on Glenfield Street on Detroit’s east side.

There in the garden, nearly 30 volunteers have gathered – to clear and trim, plant and weed, paint and beautify a cultivated lot between two abandoned houses on the block. It is hard work and a good time. On this particular August morning, there are teens employed by a youth program in the city, corporate volunteers (with the power tools!) from MS Industries in Webberville, Michigan,  Jewish kids from the mentoring program PeerCorps . . .  and 11 students and post-grads who have come from Germany and cities across the U.S. to participate in a community-building initiative called Growing Together Detroit.

Now in its second season, Growing Together Detroit represents a community volunteer collaboration, envisioned and spearheaded by Richard Bachmann, 28, a German graduate student working in partnership with Karen (Chava) Knox, co-founder of the Eden Gardens Block Club and board member of the Isaac Agree Downtown Synagogue (IADS).

Richard fell in love with the city of Detroit and the Jewish community in 2013 when he began work as a volunteer assigned to the Holocaust Memorial Center (HMC) Zekelman Family Campus through the German program, Action Reconciliation for Peace (ARSP). Similar to the Peace Corps, ARSP sends young German volunteers around the world to promote positive connections between communities with the goal to fight racism and promote understanding and harmony among all nationalities, races and religions. 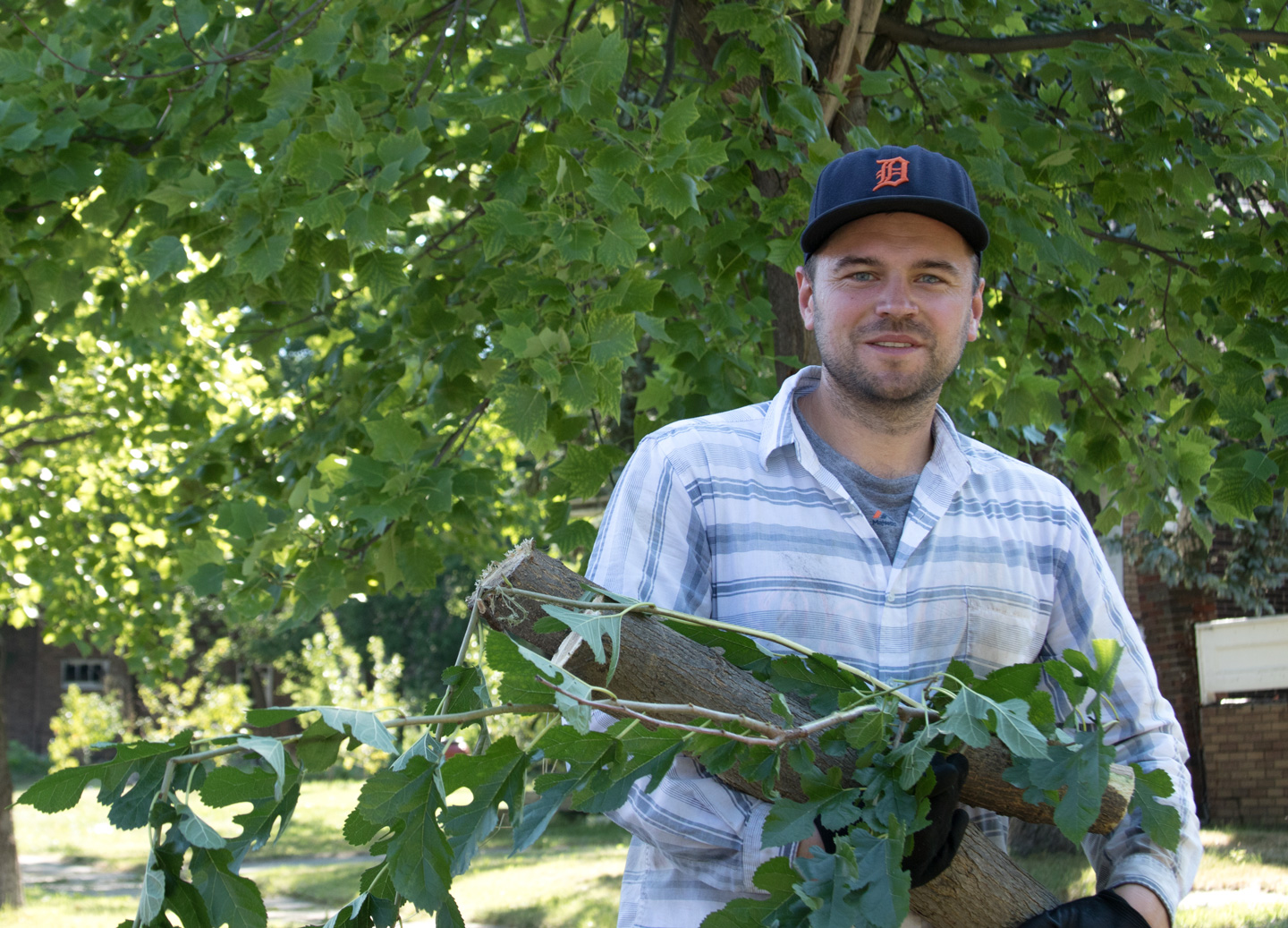 Richard Bachmann: working to build a little corner of Eden as Program Coordinator  for Growing Together Detroit

Richard met Chava in the summer of 2014. At that time, the concept of Eden Gardens was just taking root with the financial support of the Jewish Women’s Foundation of Metropolitan Detroit and IADS volunteers. Inspired by Chava’s tenacity and her work in the garden, Richard created his own path back to Detroit the following summer as Program Coordinator of ARSP’s newly formed Summer Alternative Break Program, Growing Together Detroit.

With his 11 recruits this year, Richard has refined the two-week program, pairing his volunteers each day with young people from the city, allowing the time and space it takes to make connections and lasting impressions. Within the group this year, ages range from high school seniors to mid-30’s; in the mix are grad students and Special Ed teachers. They’ve come from towns and cities including Berlin, Erfurt and Köln in Germany; Los Angeles, CA, Jonesboro, AR, and East Lansing, MI.

How the garden grows

Like a summer camp director, Chava orchestrates the activity in the garden to maintain the pace of work (and play) with a sense of purpose. “The youth we pair each visitor with are employed by the city to work in Eden Gardens Block Club,” Chava explains. “So everyone works in the garden with a buddy for the day. By first break in the morning,  they know each other’s name and have learned something about their buddy. This was our way of opening the door to developing true knowledge of each other and building friendship.” 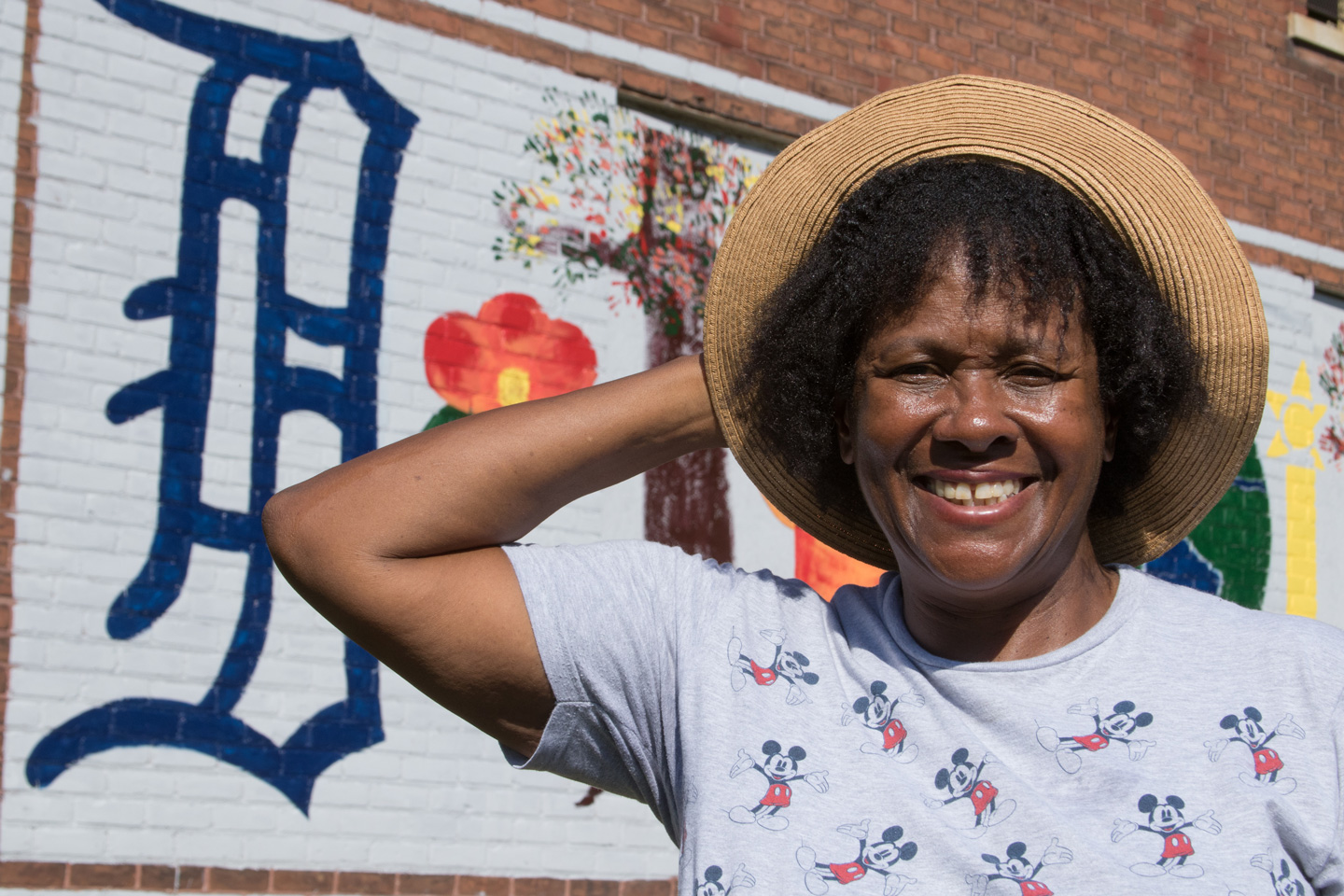 Tending the garden and growing  a following,  Chava Knox is both Co-Founder of Eden Gardens Block Club and a Board Member of the Isaac Agree Downtown Synagogue

The tomatoes growing in profusion are Chava’s favorites. Walking through neat rows of peppers, cabbage, broccoli, beets and collard greens, she points out an impressive eggplant that will go into the next meal at the Downtown Synagogue. “Our produce goes into the kitchen at the Synagogue,” she says. “But there’s plenty here for the neighborhood to enjoy as well.”

Building up a sweat, clearing trees stumps to make more room in the garden, Richard walks by with an armful of branches and notes that the group is making headway, thanks to the manpower and a chain saw, courtesy of volunteers from MS Industries, makers of components for heavy duty diesel engines. 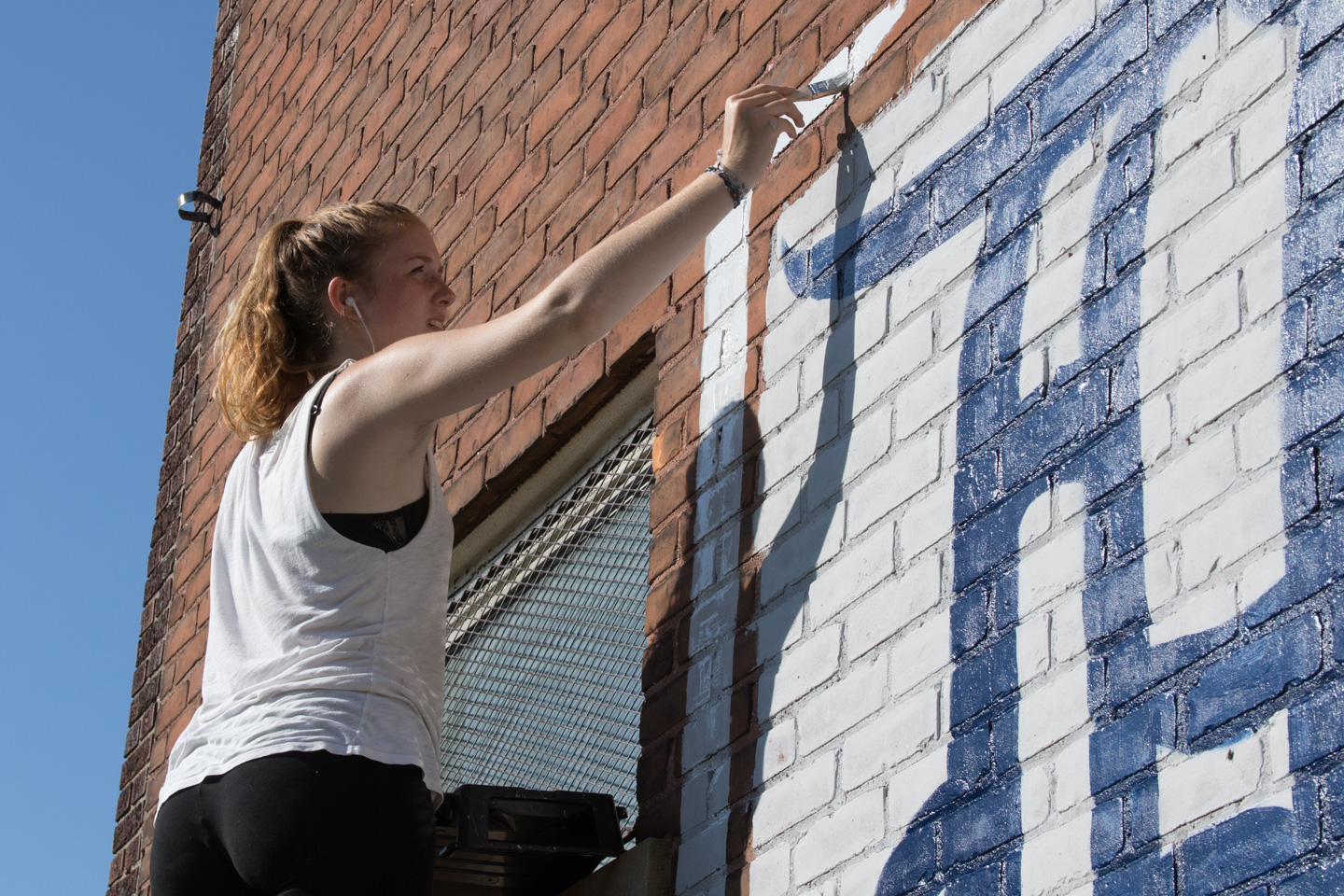 Mia Steiger, a high school senior for Erfurt, saw a brick wall and designed a mural.

On a ladder, with paintbrush in hand, we find Mia Steiger, a high school senior from Erfurt working with her counterpart from the city, Michaela. “Last week I saw the brick wall [on the side of the house next door] and envisioned a mural. I asked Chava if we could design it, and she said, ‘Yes, bring me an idea, and I’ll bring you the paint.’” 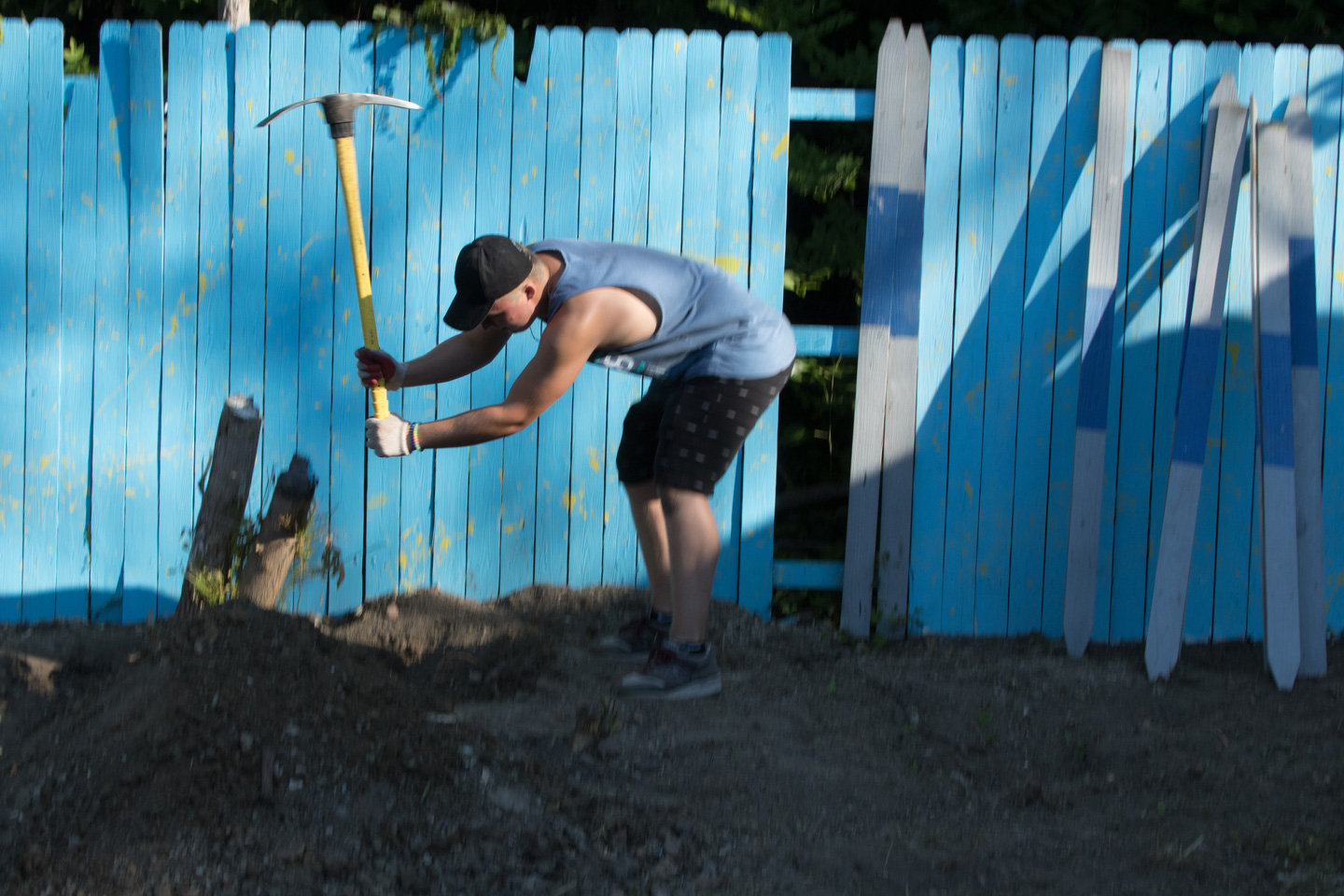 Emile Heim, from Jonesboro, Arkansas, feels right at home with hard work and a pickaxe.

Swinging a pickaxe to dig out a tree stump, Emil Heim, a burly senior from Jonesboro, seems right at home. Asked what drew him to Detroit, he admits that he’s building his resume for college, but adds another reason, “My parents are from Germany; I have a German passport and I am fluent in German, so I found this program to be a good opportunity to hang out with new friends and practice my German.” 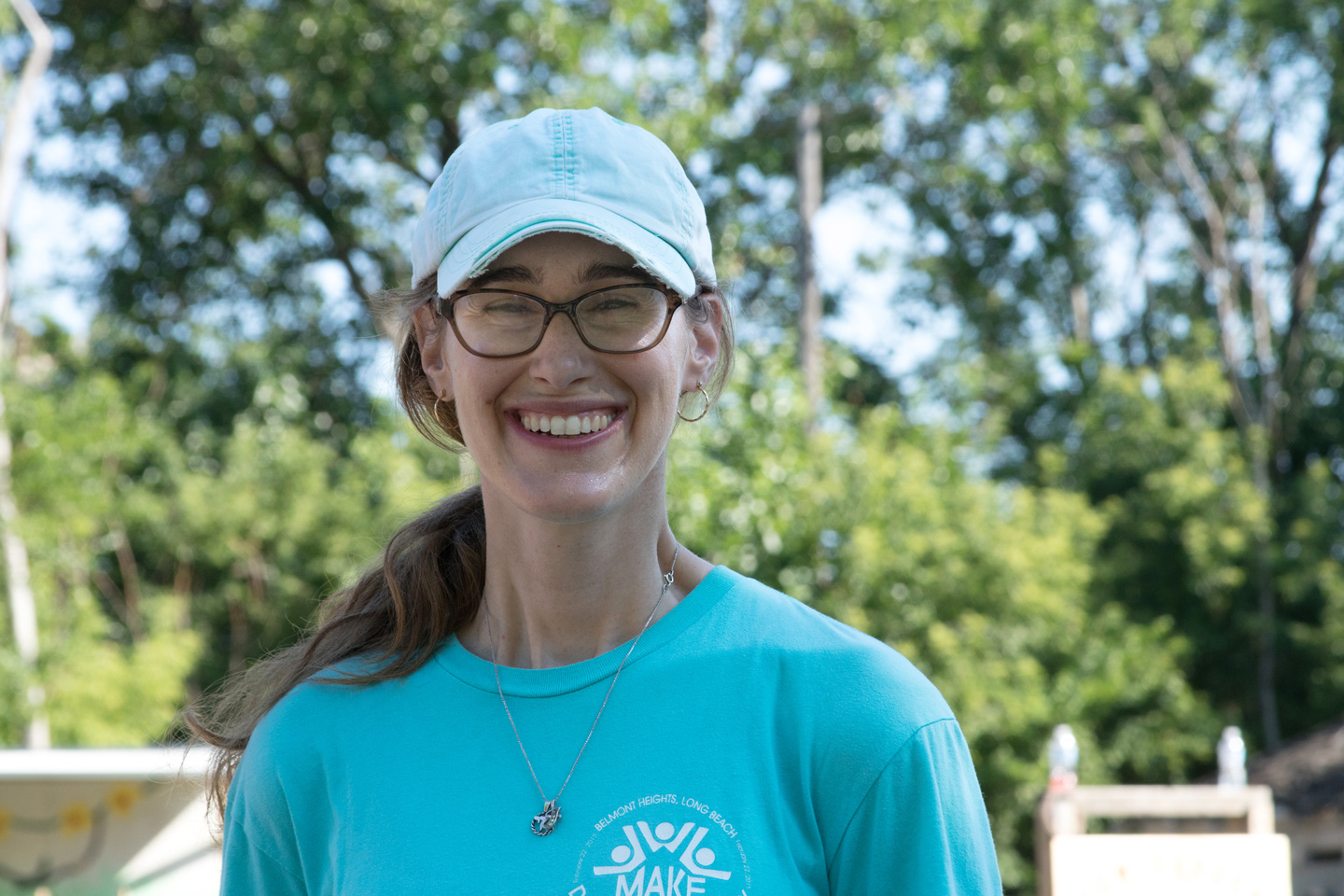 “Everything about this program interested me, ” says Jaime Steinman, a grad student in special ed from California.

A third generation Angeleno, Jamie Steinman, 35, from San Fernando Valley chose the program as a summer break from her studies at CAL State where she is earning her  Master’s in Special Ed. “I’m Jewish,” she said with pride. “I know the Jewish Federation very well in L.A. I love doing volunteer work and community service, and when I came across an opportunity with Repair the World, which has a presence in Detroit, working with the Jewish community, the African American community and Germans, in a garden, learning about the history the history of Detroit and its resurgence . . .  it just like, bam, bam, bam! Everything about this program interested me.”

As volunteers in the garden come and grow, each one stands a little taller, a little stronger and more firmly planted as Detroit’s most ardent and global ambassadors.  “It’s not all work without play,” adds Richard. “We’ve been to a Tigers game, toured downtown, visited the burbs – we’ve been learning together, living together, cooking together, sharing our cultures. We leave this place as friends with lasting memories. It’s been a blast, and best of all, we leave Detroit with pride that we’ve helped build a little corner of Eden. 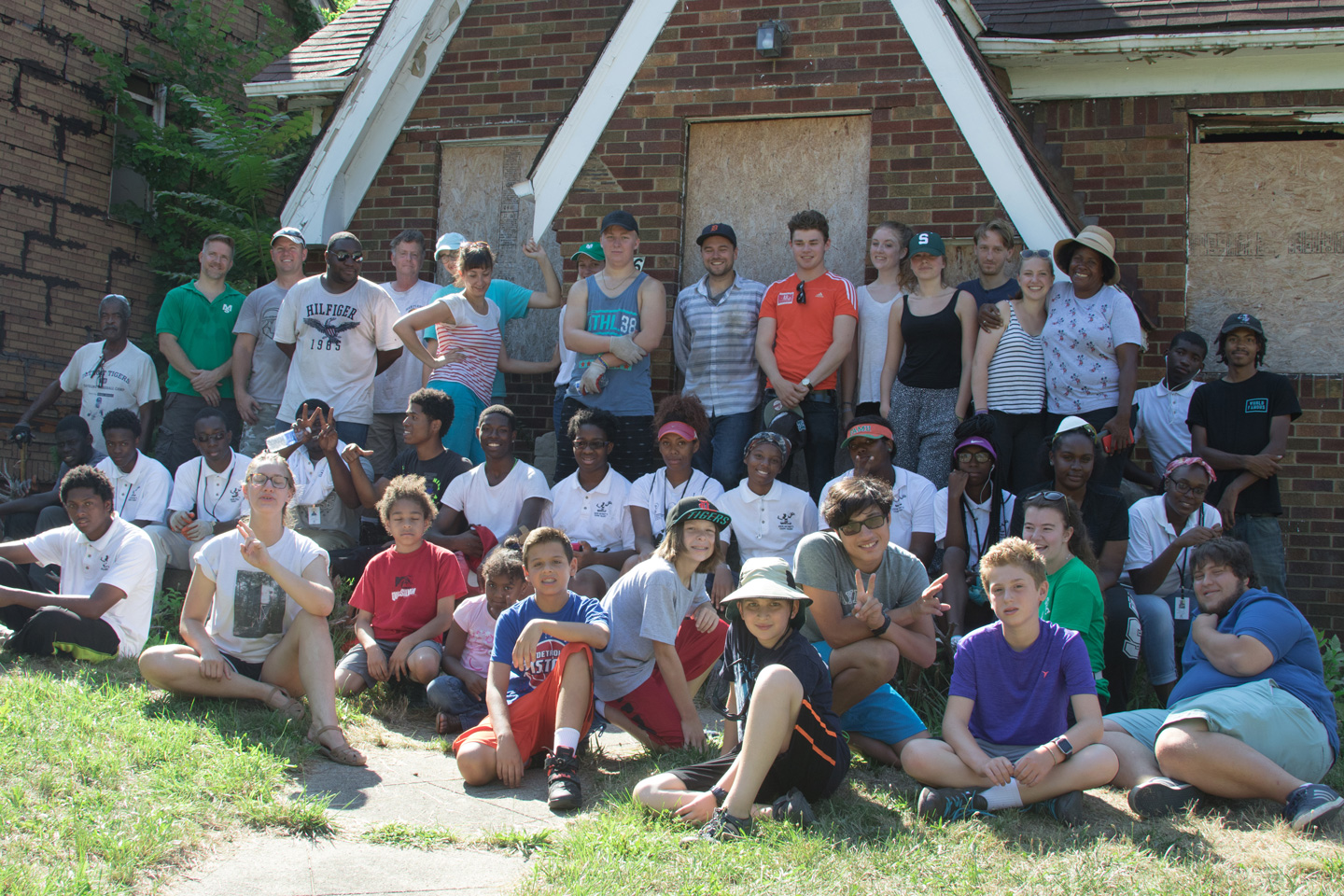