On a Solidarity Mission

One indication of just how well the Jewish Federation can gear up to quickly channel community resources for urgent needs was the Israel Emergency Fund raising more than $1.2 million in short order. While some dug deep into their pockets, others felt an irrepressible need to be in Israel in direct response to the crisis. And so, even as missiles from Gaza were still flying late in August, Federation launched a Solidarity Mission with the invitation to “Stand Up and Be Counted.” 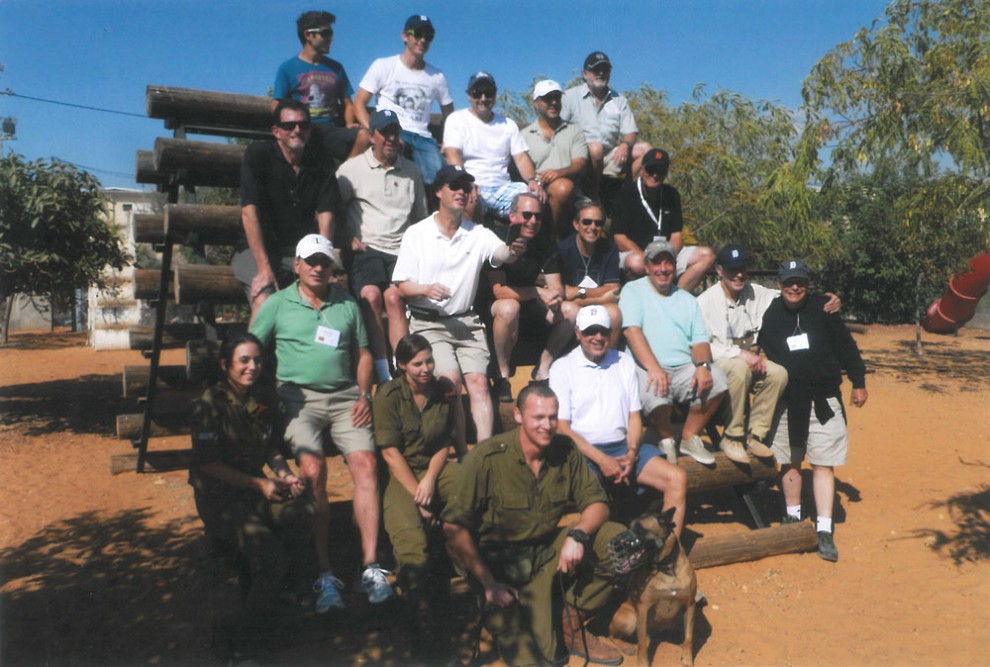 A highlight of the mission: a visit to the IDF Oketz Base to meet with soldiers and officers of the elite Combat Canine Unit,

More than a minyan, 14 men stepped forward for a whirlwind trip

Co-chaired by longtime Federation leaders, Robert Orley and Dr. Jeffrey Forman, the four-day mission scheduled for September 7-11 was organized and booked within a week’s notice for the 14 participants. “No one does it better than the Detroit Federation,” stated Rob Orley, co-founder of Real Estate Investment Group and Partner at O2 Investment Partners, a private equity firm.

A veteran mission leader, Rob has been to Israel dozens of times. Sitting over dinner on a Sunday evening in August with Federation’s Major Gift Director, Dan Greenberg, Rob mentioned his desire to get to Israel: to stand up and be counted. “Let’s do it!” said Dan. “You chair the mission and we’ll make it happen.”

“The quality and dedication of the men that went on this important mission was matched by the unforgettable people that we met in Israel. Their resilience and positive energy were inspiring. –Scott Stern, Mission participant and Chief Operating Officer, Detroit Federation

While every trip to Israel inevitably offers its own opportunities for unique discovery, Rob describes this one in particular as extraordinary. “With thanks to Federation’s Israeli team in Jerusalem – Director of Missions and Exchanges, Naomi Rockowitz, and consultant, Tova Dorfman, as well as Yoav Raban in the Partnership2Gether Region — the preparation for the mission, the itinerary, the quality of speakers and the high level access to people, places and information were all superb,” Rob observed. Standout meetings included briefings with Former Ambassador to the U.S., Michael Oren, Israel Finance Director, Yair Lapid, and author Daniel Gordis. 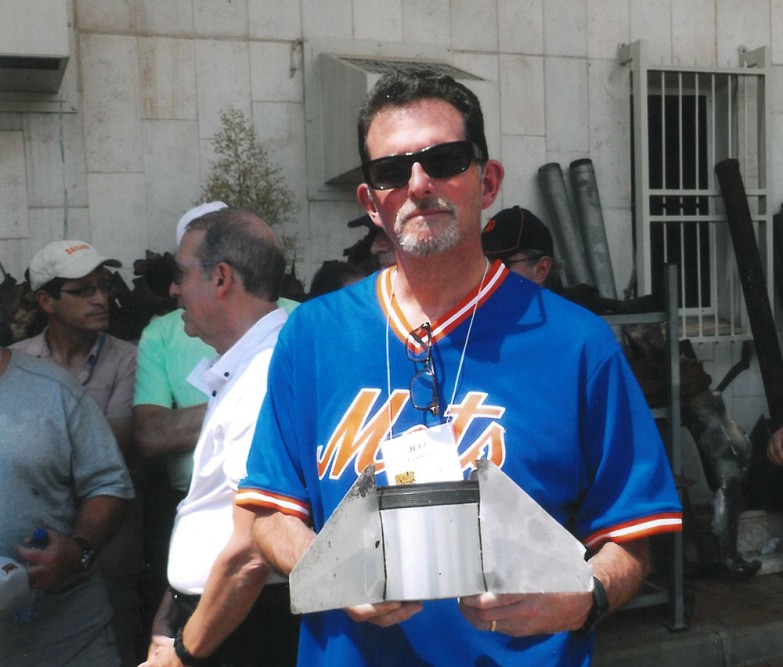 At a briefing on the Iron Dome, Jeff Forman holds a section of a Hamas missile intercepted and fired down by the IDF.

“You can’t read enough in blogs and newspapers to synthesize the amount of knowledge and insight we gained in just those four days spent in Israel,” stated Jeff Forman, Co-chair of Federation’s Annual Campaign, a radiation oncologist in private practice and professor at Wayne State University. “Another major part of what makes a mission memorable is the collective experience of the participants. We could not have asked for a more outstanding group of veteran travelers. We all had been to Israel before and, even though many of us visited numerous times, we all experienced things that were new to us and extremely compelling.”

Iron Dome: The Hero of the War

In Israel, they say that the true hero of the war – dubbed “Operation Protective Edge” – was indeed the Iron Dome. A highlight of the mission was meeting Brig.-Gen. (res) Dr. Danny Gold, who helped develop the system. “Without a doubt, Israel’s Iron Dome Defense System saved more lives than any person or military strategy involved,” said Jeff. “The system speaks for itself,” said Gold who is CEO of his own technology company today. “The Dome not only saves lives but also prevents billions of dollars in damages to property. Israel is working, the economy is running today (because of the Dome).”

According to the Israel Defense Forces (IDF), Hamas and its Palestinian militia allies fired nearly 4,700 missiles, rockets and mortars into Israel during the 50 days of the conflict. This marked the most intense barrage on the Jewish state, surpassing the total number of bombs dropped in London during World War II and the 4,500 missiles fired by the Iranian-sponsored Hezbollah in 2006. The vast majority of these missiles either misfired, landed in Gaza itself or fell harmlessly in more or less unpopulated areas of Israel. According to The Jerusalem Post, though, Iron Dome “shot down” at least 735 Hamas missiles — a number said to represent between 85% and 90% of all missiles heading toward population centers.

Oketz: The Dogs of War

Another highlight of the mission was a visit with the soldiers and officers of Israel’s elite Oketz Canine Unit. Considered the best (and the only one) of its kind in the world, Oketz (Hebrew for ‘Sting’) is an independent operation which trains soldiers and dogs to work effectively in pairs – specifically on border patrols or in other high-risk areas such as buildings and tunnels where planted bombs or people may be waiting in ambush. 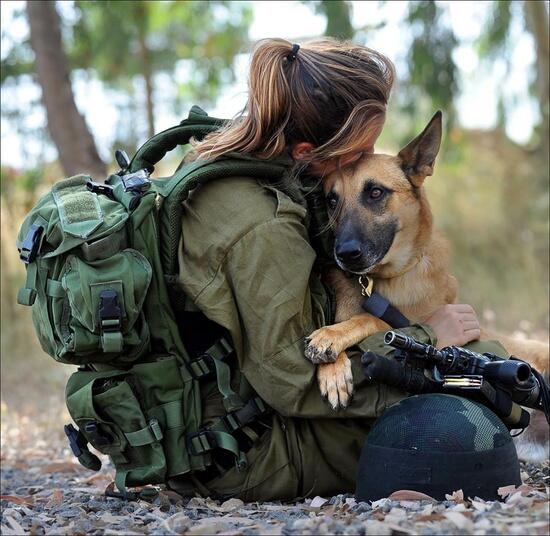 “It’s an incredibly dangerous job for which the soldiers volunteer and the dogs are honored as true warriors,” explained Jeff. The IDF even has a special cemetery for dogs that die in battle, located at the Adam military base near Modi’in.

As Jeff described, the level to which the soldiers bond to their dogs was illustrated by a story that was shared with the group at the base. “One of their soldiers and his dog died in the combat operation, and the soldier’s family was so moved by their son’s attachment to his dog that they requested to delay the dog’s burial until they finished sitting shiva for their son so they could attend the dog’s memorial service as well. Along with the family, hundreds of soldiers showed up for that service and the sister of the fallen soldier delivered the eulogy for the dog. “As we listened to that story and learned that the soldier’s sister subsequently had joined the Oketz Unit,” Dan Greenberg recalls, “there was not a dry eye among us.”

Resilience is a quality often associated with Israelis. “The Israeli people are remarkably resilient,” observed Jeff, “But this war had an effect nonetheless. The psychological trauma of the daily bombardment, sleeping in bomb shelters, the uncertainty and disruption of normal day-to-day life and especially the impact on children – all had effect.” Israelis have paid a high price for this war, not only in the blood of 64 solders and six civilians who died in the south, but in the loss of government services and resources to civilians abandoned throughout the operation and the loss of tens of billions of dollars to the economy.

All participants on the trip agree that a major take-away was that our Federation dollars are felt and appreciated. “We could see firsthand how our Federation dollars are well spent to benefit the hundreds of children who were moved out of harm’s way in the south to summer camp programs in the north,” Jeff commented. “And we talked with older people who were helped because it was not easy, nor safe for them to get out of their homes for groceries or into shelters.” 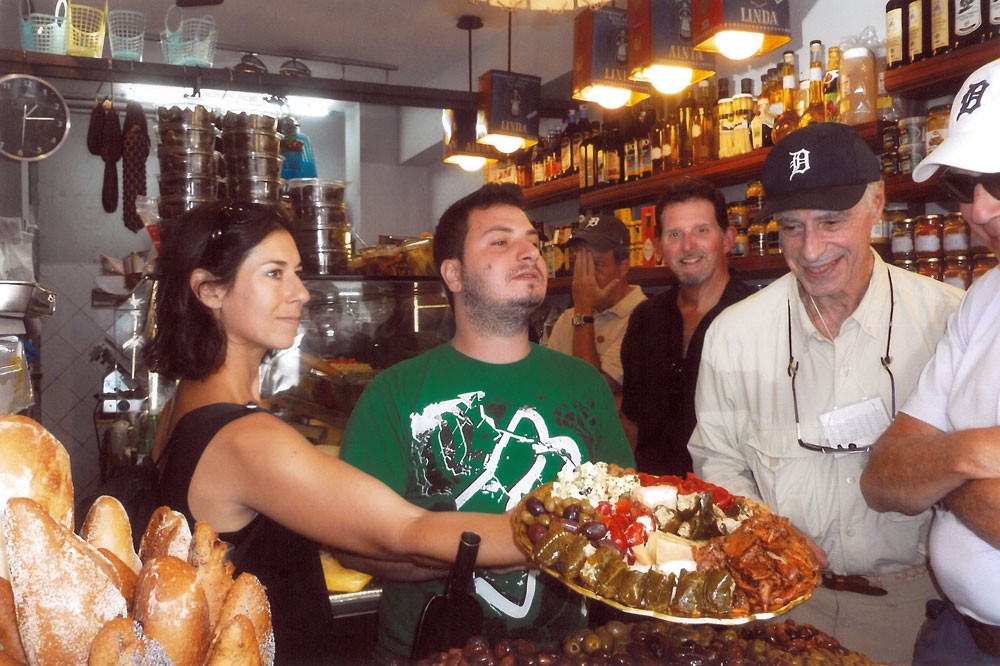 A culinary tour through the the delights of the market with Inbal Baum of Eat.Drink.Tel Aviv.

Given everything the group was able to see and do, perhaps the most extraordinary aspect of the mission was the level of gratitude Israelis expressed all along the way. “Wherever we traveled, people would stop and thank us for coming,” said Rob.“We would get to a hotel and people thanked us. At every high level briefing or visit on our itinerary, people thanked us for our support. We took a culinary tour through the market with Inbal Baum, of Eat.Drink.Tel Aviv, and with every delicious sample, the merchants expressed their thanks for our visit. ”

If there’s one final message to drive home, Rob emphasized how safe the group felt throughout their stay. “The number one question I’ve been asked since I’ve been home is how safe is travel to Israel today. I would say that safety is everyone’s concern in Israel and that’s what made our travel so secure. At each stop, we were made aware of where the safe rooms were and what to do,  but never once were we personally concerned for our own safety, not even for a minute.”

Back at the hotel just across the street from the Old City in Jerusalem after a long day of touring, Rob decides instead of a nightcap to make a quick stop at the Kotel – the Wall. “And six guys come along,” he says, “No need for a cab. We’re walking to the Wall. It’s 11:30 p.m. and the streets are filled with people, the city is lit up, bright as a candle, alive and well. Welcome to Israel.”