The Power of Detroit Community Birthright

Beyond the thrill of travel in Israel, beyond the camaraderie and true friendships that can grow along the way, there’s really no telling where a Detroit Community Birthright trip will go.  “I had not given serious thought to actually living and working in Israel until I took that trip,” said Jordan Barpal, a former Wolverine and a Community Birthright 2012 alum. “Birthright really opened my eyes to the next steps toward a career.”

Well suited to the 10-day intensity of the trip, Jordan struck Federation Birthright staffers as “a well-rounded talent, a promising leader” and an excellent candidate for the programs in Israel for which he would apply.

Today, Jordan is one of 25 Jewish college graduates worldwide now serving in key ministries through the elite Israel Government Fellows Program (IGF).  A  graduate with a B.A. in political science from the University of Michigan, Jordan was working as an intern for a prestigious international law firm in New York before he landed a year-long placement at the Israel Government Debt Management Unit of the Accountant General’s Office. Jordan’s work at the Accountant General’s Office appeals to his interest in international finance and entails research in foreign countries, exploring new markets to issue Israel international bonds. 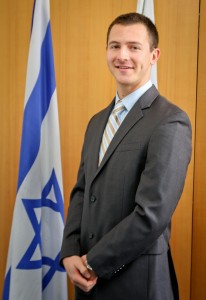 Jordan Barpal in Israel: in service with the Israel Government Fellows Program.

Established in 2007, the IGF program is run by Jerusalem’s Menachem Begin Heritage Centre, bringing to life the vision of former Prime Minister Menachem Begin to connect Diaspora communities with Israel at every level of society. Fellows join after graduating college or following a few years gaining experience in their field.

The IGF program is supported by Masa Israel, a joint project of the Government of Israel in partnership with the Jewish Agency for Israel (JAFI) where Federation’s dollars go to support young adults in work-study-volunteer programs in Israel. In addition to the Israel Government Fellows, Jordan is a participant in Masa-Presentense, a venture accelerator fellowship program designed to train early-stage social entrepreneurs in developing and launching low-cost, high-impact initiatives.

“The exposure and the kinds of opportunities I’ve had to work in Israel are rare and extremely interesting,” observes Jordan. “The Israeli work culture is not hierarchical. We work as colleagues. If you have an idea to contribute, you are encouraged to do so. There is not a rigid structure here. On my first day (at the Ministry), I was thrown into work on a professional level straight away. It’s a challenging work model. I’m learning fast and learning to think quickly.”

A metro Detroiter, brought up in Birmingham, Michigan, Jordan grew up with strong Jewish and Zionist identities.  Jordan’s father, Ofer, grew up in Ramat-David, a Kibbutz in Israel located in the Jezre’el Valley – in the heart of the Detroit Federation’s Partnership2Gether Region of the Central Galilee. As Federation’s Young Adult Engagement Coordinator in Israel, Yoav Raban, further explains, “Jordan’s Israel connection has a unique tie to the Detroit Jewish community and a personal tie to my family. Our fathers grew up together on the same Kibbutz. Since Jordan’s mom, Elissa, is from Detroit, we like to say that Jordan’s parents created the original Partnership between our two communities.”

“In our very small Kibbutz (about a 100 families), our family and the Barpal family were very close” Yoav continues.  “Our fathers were boyhood friends. Our grandparents – freedom fighters in the Palmach – were also close friends. And, back in 2007, when I first moved to Detroit to work for the Detroit Federation as the community’s Israeli emissary, the Barpals took me in as a member of their family. In my four years in Detroit, I’ve had a chance to see Jordan grow up from a wonderful and promising teenager to an outstanding and successful young adult.” 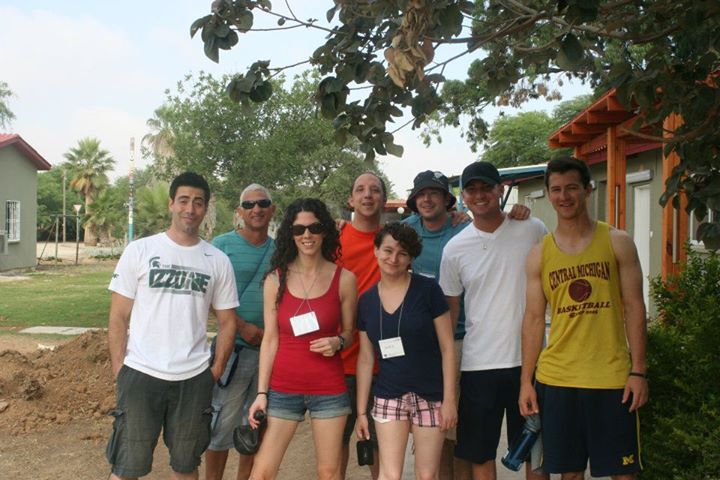 And did we mention football?

Talented on many fronts, Jordan is also a gifted athlete. Turning down a full scholarship at a small college, he chose the University of Michigan for a more rigorous academic challenge. That decision paid off. Through hard work, he excelled in his studies as well as sports – well enough to secure a roster spot playing wide receiver for the Wolverines.

Reflecting on those college days, Jordan admits he misses the kind of teamwork and commitment inherent in the game. “But it was time to move on. This past year in Israel has given me some great insights into the global market and the economy. I have law school and business school in my sights, but I would like to remain within the area of government, politics and the public sector. Being in a leadership program like this also has given me the desire to contribute to the Jewish community in a supportive capacity where I can.”

What’s next?  Will it be law school?  Back to Detroit?  Or on to Washington D.C., where his parents have relocated? Jordan has yet to pin down his career plans. But for now, he’s giving his all to his current role in the Accountant General’s Office in Israel.”

Interested in joining a Detroit Community Birthright trip? Been on Birthright and want to get involved? Contact Ayelet (kon@jfmd.org)