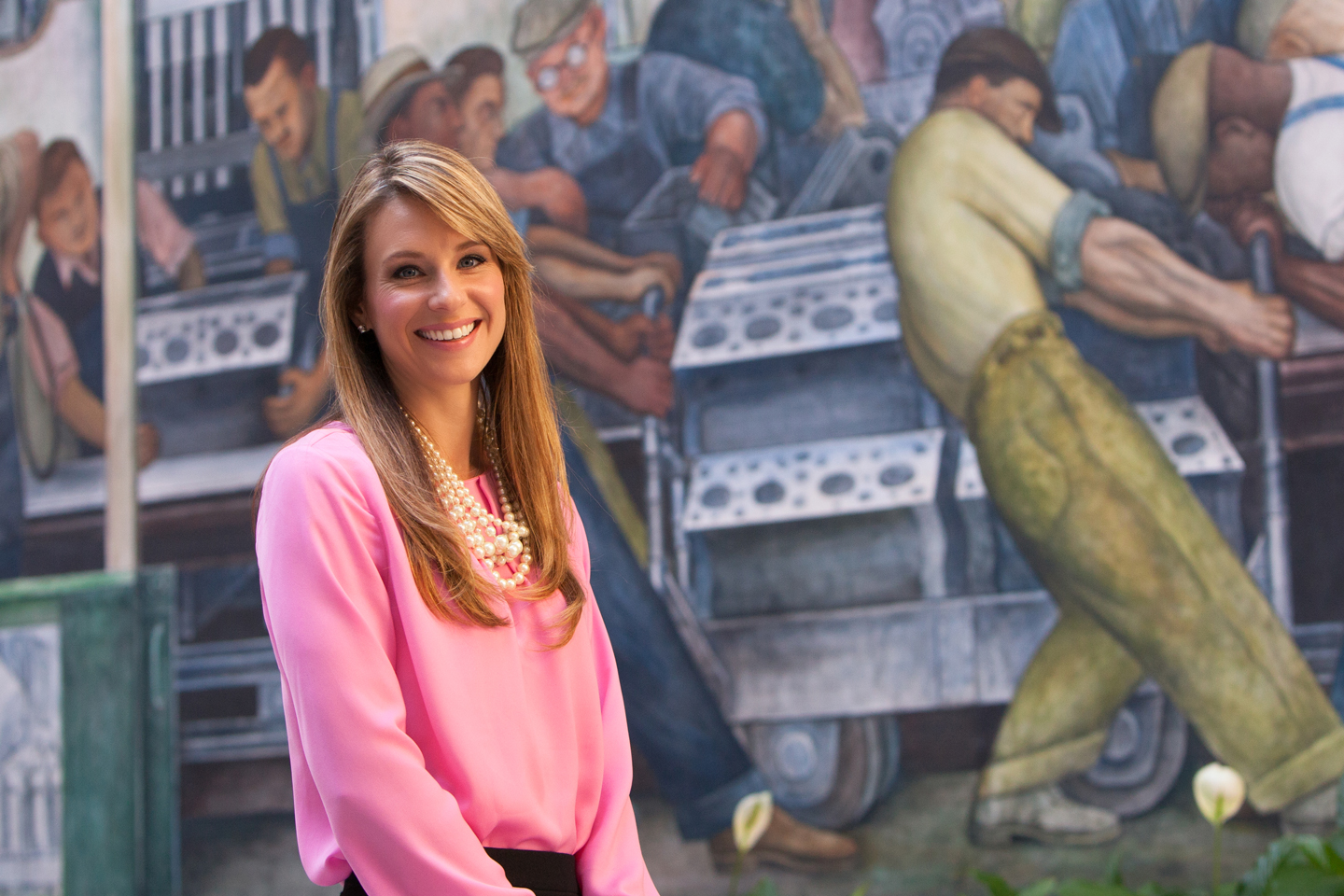 Soft-spoken with a ready smile that can light up a room. From Kelli Saperstein’s outward demeanor, one might be surprised to meet a young woman with the gumption, inner strength and resilience of a marathon runner.  In a traditionally male-dominated profession, she excels as a trusted financial and investment advisor at Telemus Capital. A volunteer with an exceptionally entrepreneurial spirit, she serves on multiple boards including Jewish Family Service, Federation’s Women’s Philanthropy and NEXTGen Detroit. A natural leader with a sense of adventure, Kelli has gravitated to the work of Federation’s overseas partner agency, the American Jewish Joint Distribution Committee (more commonly known as the JDC or “the Joint”). As a member of JDC’s young leadership development arm – Entwine, Kelli recently traveled to China and lead an international mission to Ethiopia.

Raised in Charlevoix, Kelli describes her childhood as idyllic – growing up in a close-knit family and a community where her high school class was just 100 people. “It was beautiful and I always enjoy returning,” she says. While earning a B.A. in Economics and English from the University of Michigan, she attended a summer program between her junior and senior year at the London School of Economics and Political Science in London, England, where she studied Market Structure Theory and Fundamental Analysis. Prior to joining Telemus, she was the Director of Operations at the Jablon Group in Los Angeles. With the pull of family in Michigan, Kelli returned in 2010.

Most recently, with the desire to be a part of the movement back to the city of Detroit, planting new roots in the community, Kelli moved into the Broderick Tower downtown. Truly a Detroit denizen – a new face of “Detroit Industry” joining the ranks of those working hard to transform the urban scene, Kelli has immersed herself in all the city has to offer, running along the Dequinder Cut (she runs half marathons and hopes to complete a full someday), biking to the Eastern Market, practicing yoga, pursuing her interest in photography and enjoying city life in general – attending gallery shows and discovering new shops and the many restaurants popping up in Midtown and the neighborhoods.

We meet Kelli at one of her favorite spots downtown at the DIA – where she also helps plan events from time to time as a member of the museum’s Founders Junior Council. 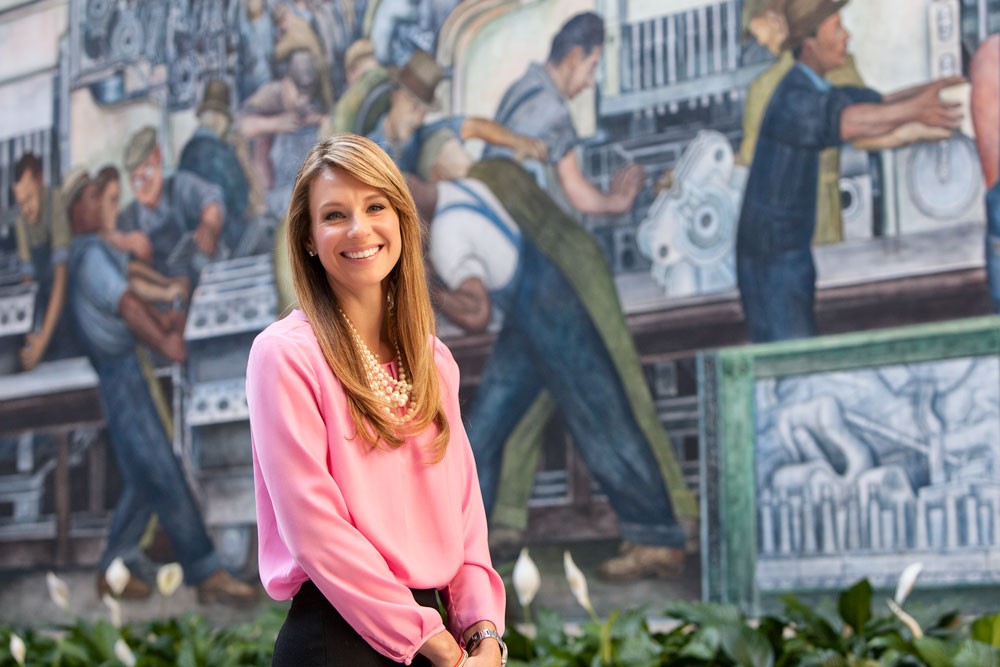 Kelli Saperstein at the Detroit Institute of Arts

Q: You grew up in the heart of “Pure Michigan” tourism.What was that like?

Charlevoix (also known as Charlevoix, the Beautiful): I had a fantastic time there. I spent my summers on the water sailing and my winters skiing. I was also so fortunate that my parents liked to travel.  We would really explore the places we visited – trying to get a sense of how the locals live.  Even during my years in college on spring breaks, we’d travel as a family and I would meet my parents wherever they were vacationing.

I also have my parents to thank for my interest in finance and the financial services industry.  They were in banking before they retired, so I grew up discussing the markets and world economies at the dinner table. 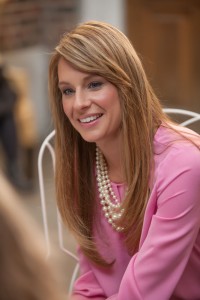 Q: Where did you start working in finance?

I took an internship at Morgan Stanley in the Livonia office during my senior year at Michigan. After I graduated, I worked there for two years before moving to Schechter Wealth Strategies in Birmingham. I was at Schechter for almost five years before deciding to move to Los Angeles where I worked as the Director of Operations at a boutique insurance firm. Living in Los Angeles was very fun and exciting, but it was way too far from my family. I moved back to Detroit in 2010 and got a job at Telemus Capital first as a Wealth Analyst (I’ve since been promoted to Wealth Advisor).

Q: How did you get connected with Telemus?

Telemus was started by Gary Ran, Bob Stone and Lyle Wolberg – all very active in the Jewish community. They brought me in to the firm as a Wealth Analyst in 2010. Actually, the way I was connected to the company was though family friends who passed my resume along to Gary and put in a good word for me. It really speaks to the strong network of people pulling for one another in our community. And it also goes to show how determined the Detroit business community is to attract, connect and recruit young talent.

I was promoted to Wealth Advisor at Telemus last year, which means I work with individual clients providing guidance on investment management and financial planning. Several of my clients are women and it’s nice to connect with other women in this regard; I spend much of my time just educating clients – women who are divorced or widowed – in situations where they may be managing their finances on their own for the first time.

On converting to Judaism

Q: Kelli, you are such an active part of the Jewish community, not only here in Detroit but through your affiliation with the JDC. Some may be surprised to learn that you are Jewish by choice. How did you come to your decision to convert?

I converted to Judaism after I married my late husband, Jared Saperstein, in 2007.  Jared and I were married for five amazing years before he passed away. He showed me the lovely traditions of Judaism. I began to learn more about the religion and really connected with the values.

The process of converting was a journey of self-discovery and really a terrific experience. I worked closely with Rabbi Harold Loss at Temple Israel. Jared was re-learning a lot of what I was learning for the first time and we had a lot of fun together deciding how our Jewish home would look. I am very comfortable with my commitment to Judaism; in fact, I couldn’t be anything else.

I have to credit my parents, as well, for laying the groundwork in their own convictions, instilling in me the value of giving back to your community. I grew up having that perspective – that there are greater things in life than your own familiar circle. There are people who need help. And it doesn’t matter what religion we are. 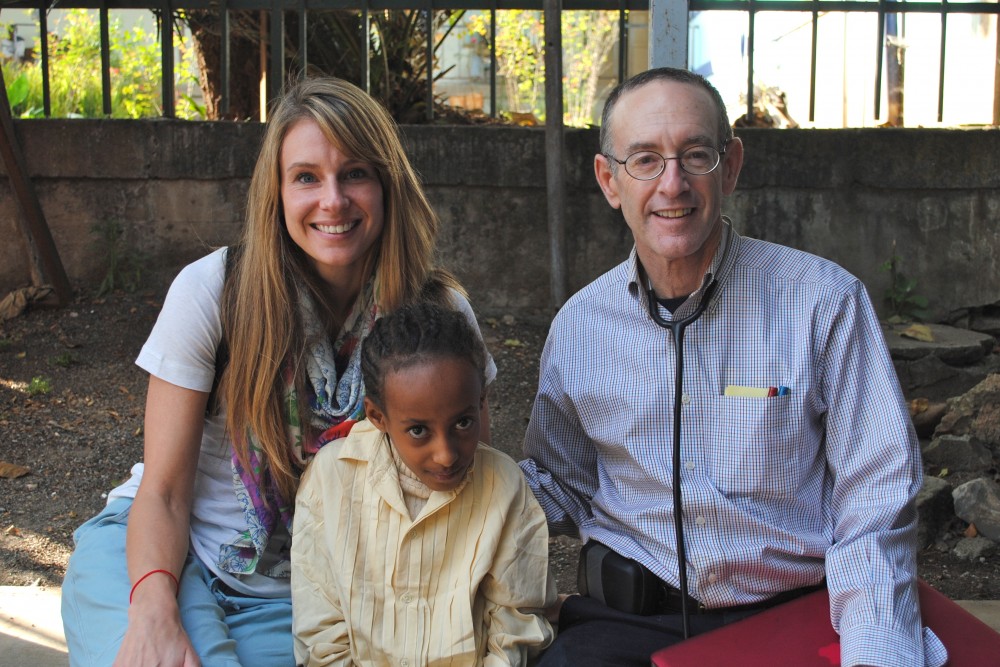 Kelli on a Mission from Ethiopia to Israel, with Sophia and Dr. Rick Hordes at his clinic. (2013)

On community work, making your mark

Q: How did you get started with your work at Federation?

I got involved with the Detroit Jewish community in 2007 at the suggestion of Gregg Orley. He advised Jared to call Federation and see what opportunities there are for young adults.  One step led to another and Jared and I joined a group of Detroiters on a Jewish Federation of North American National Mission to Israel that summer.  I was hooked from then on!

Who are your mentors?

Gregg and Harriet Orley: I have known them since I was about 12 or 13 years old.  Our families were neighbors in Charlevoix. I look to them for professional and personal advice.

Roz Blanck: I met her in 2010 when I moved back to Detroit from Los Angeles.  I am so impressed by her fearless commitment to the community. She is a great role model.

Jennifer Levine:  I met Jen in 2007 when she was the Director of Federation’s Young Adult Division (YAD) which is now known as NEXTGen.  She is an amazing woman who is so caring and empathetic.

Q: As a board member of NEXTGen, what changes have you seen in Jewish Detroit and Federation?

The creation of CommunityNext was a real game-changer in the Federation landscape. Detroit came up with a unique and exciting way to engage young people – bringing young Jews together for fun. Then over time and through that engagement, people began to learn about Federation and all it has to offer. I give a lot of credit to Scott Kaufman – and our community lay leadership – for developing this bold new approach.

Another step toward change is what NEXTGen is doing with the EPIC fundraiser (March 1st). This event is NEXTGen’s premier fundraiser where you have young adults stepping forward and actively committing their dollars to Federation. NEXTGen is also responding to the Board’s desire for leadership and development training. We have created a program called Elevate (now is its second year) which provides the NEXTGen Board with training and tools to further their development as volunteers – what is terrific about this program is that the training and tools are easily transferred to our professional lives as well.

On Israel, JDC and Tikkun Olam

Q: You have written about your experiences traveling to China and to Ethiopia with the JDC.  How has the JDC changed your vision of the world, of Israel and the Jewish community?

I was first introduced to JDC at a leadership development workshop at Tribefest in Las Vegas. We were conducting a mock allocation and the discussion surrounded the question – What is more important, to help Jews in your local community, to help Jews abroad or to help Jews in Israel? I met a woman who worked for the JDC in Israel and she connected me with the Entwine staff person. 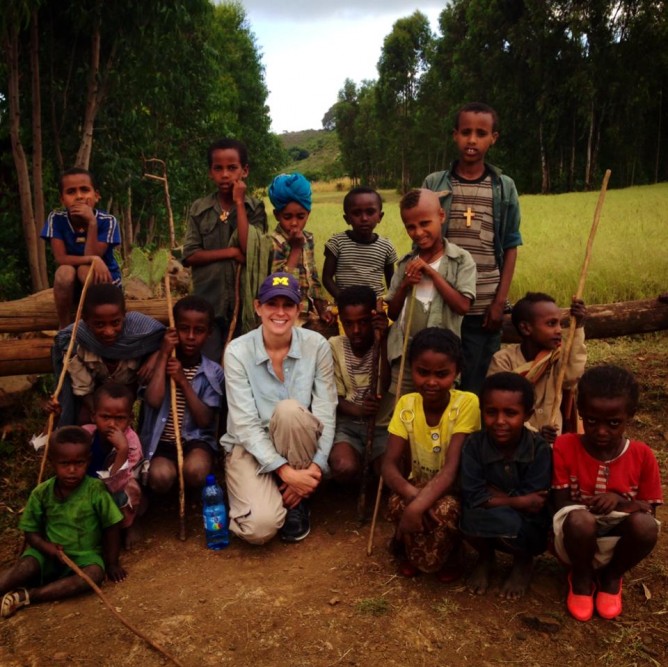 Kelli with children in Ethiopia

JDC is the world’s largest Jewish humanitarian assistance organization. It focuses on saving the world’s poorest Jews, revitalizing the Jewish community and empowering and developing tomorrow’s Jewish leaders. JDC is one of Federation’s overseas partners. Through the opportunities I had to travel – first to China, and then to Ethiopia and Israel – I have seen firsthand how important it is to help Jews live and thrive in their own communities. JDC has also shown me that it is important to help people that cannot help themselves – Jewish or non-Jewish. It is our responsibility as Jews to leave the world a better place than how we found it. Personally, it is extremely rewarding to work in the field and make a direct impact on a community – and JDC has helped me do that.

On moving to Detroit

Q: Why Detroit, why now?

Perhaps it was the influence of my work with the JDC – or the mindset to be a part of something bigger. When I heard about the renovation at the Broderick Tower in 2011, the idea of living in Detroit started calling to me. My situation was such that I was looking for a new place to go, and here was a perfect place for me – with a built-in community. With over 100 units – I knew that immediately I was going to meet people who share the same interests and passion.

Q: What would you tell someone considering moving back to Detroit or into the city for the first time?

You will not be disappointed!  You really have a chance to make your mark on the city and help shape its future!

There is so much opportunity in Detroit.  It’s a very tight knit community and you can really see the city changing in front of you.  For business, it seems that there is a very low barrier to entry, so there are new restaurants and businesses opening up all over. People who live in Detroit want the city to succeed.

Building in the Detroit skyline: Broderick Tower and Guardian Building

The most current issue of The Economist, The Wall Street Journal, and The New York Times. 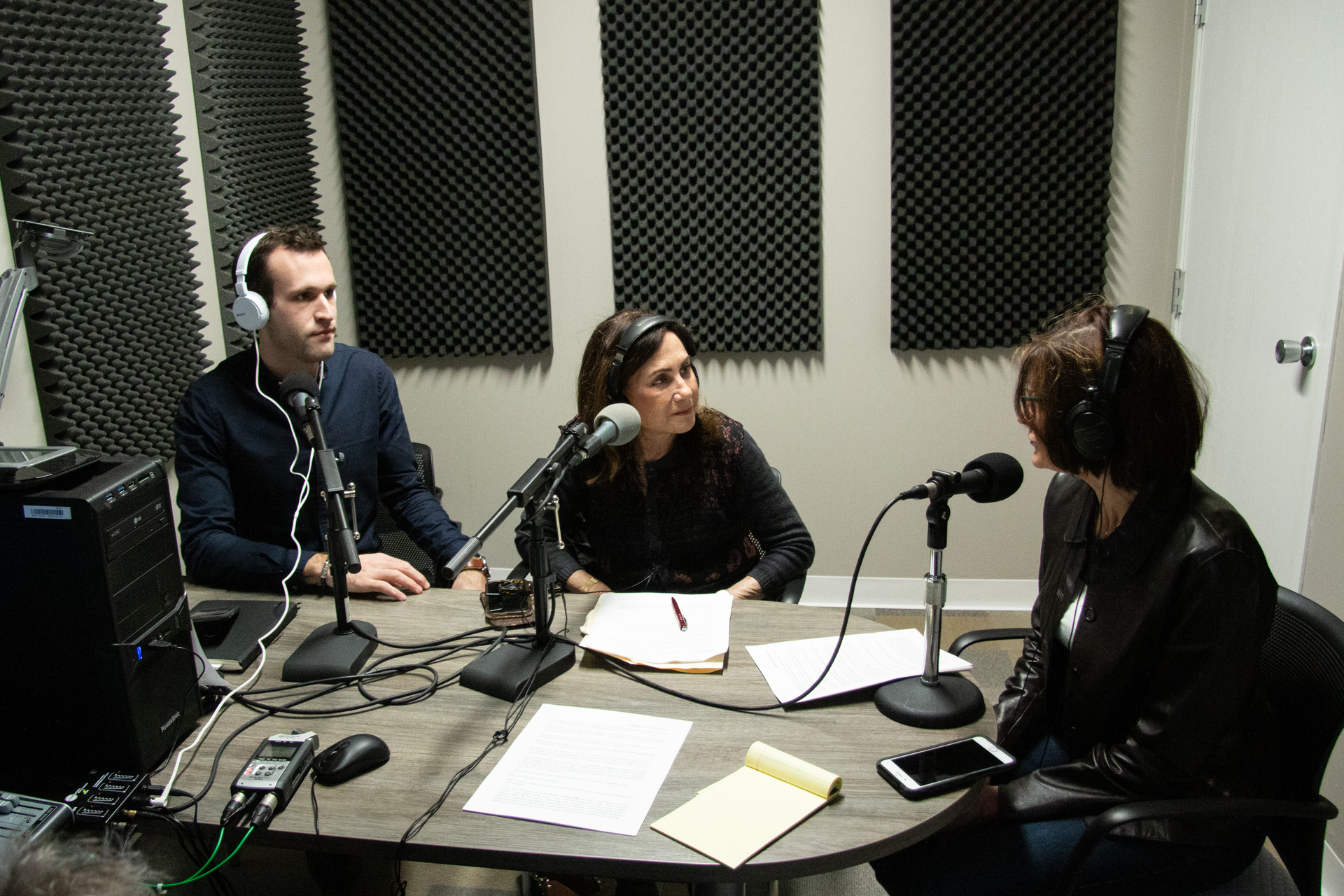 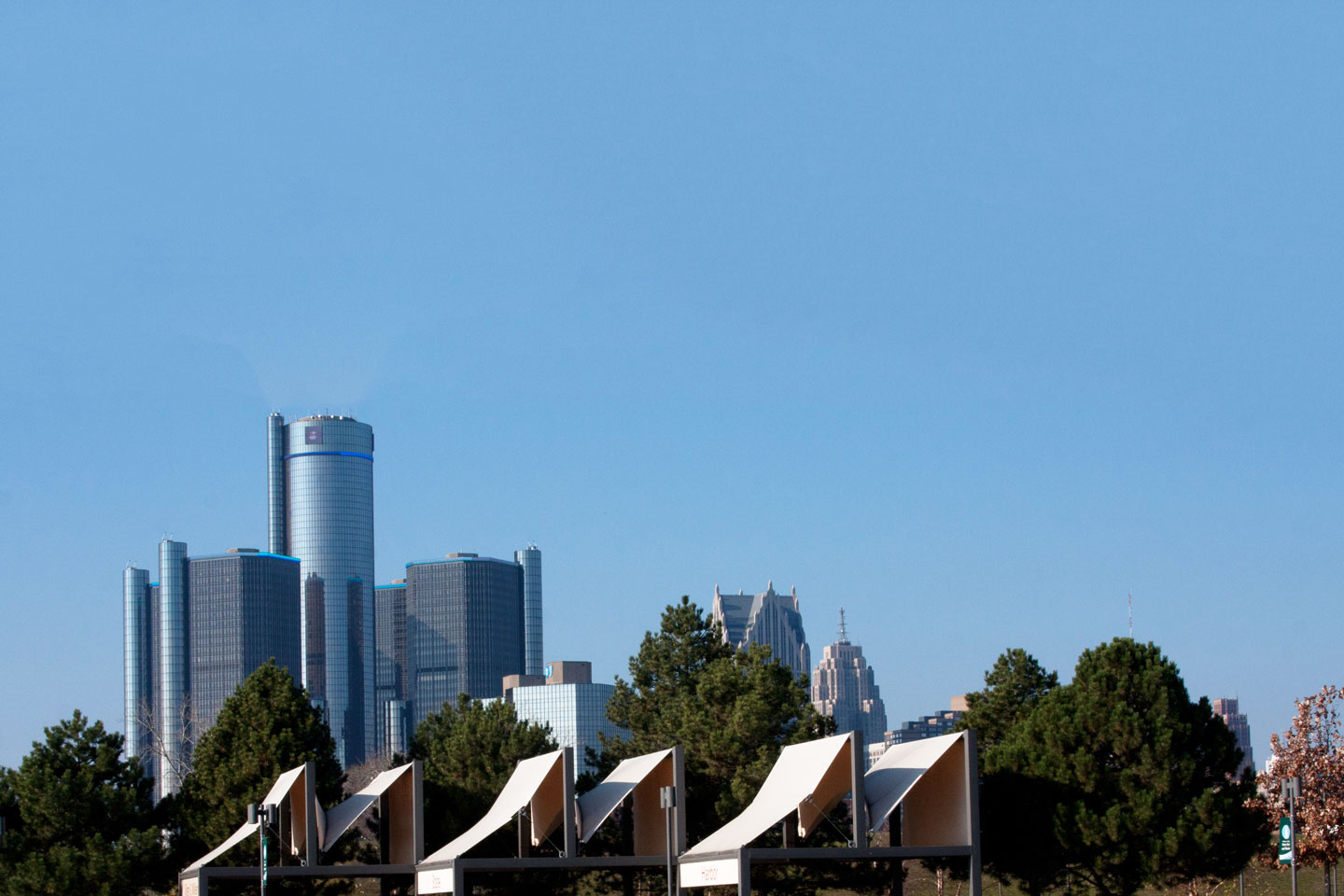 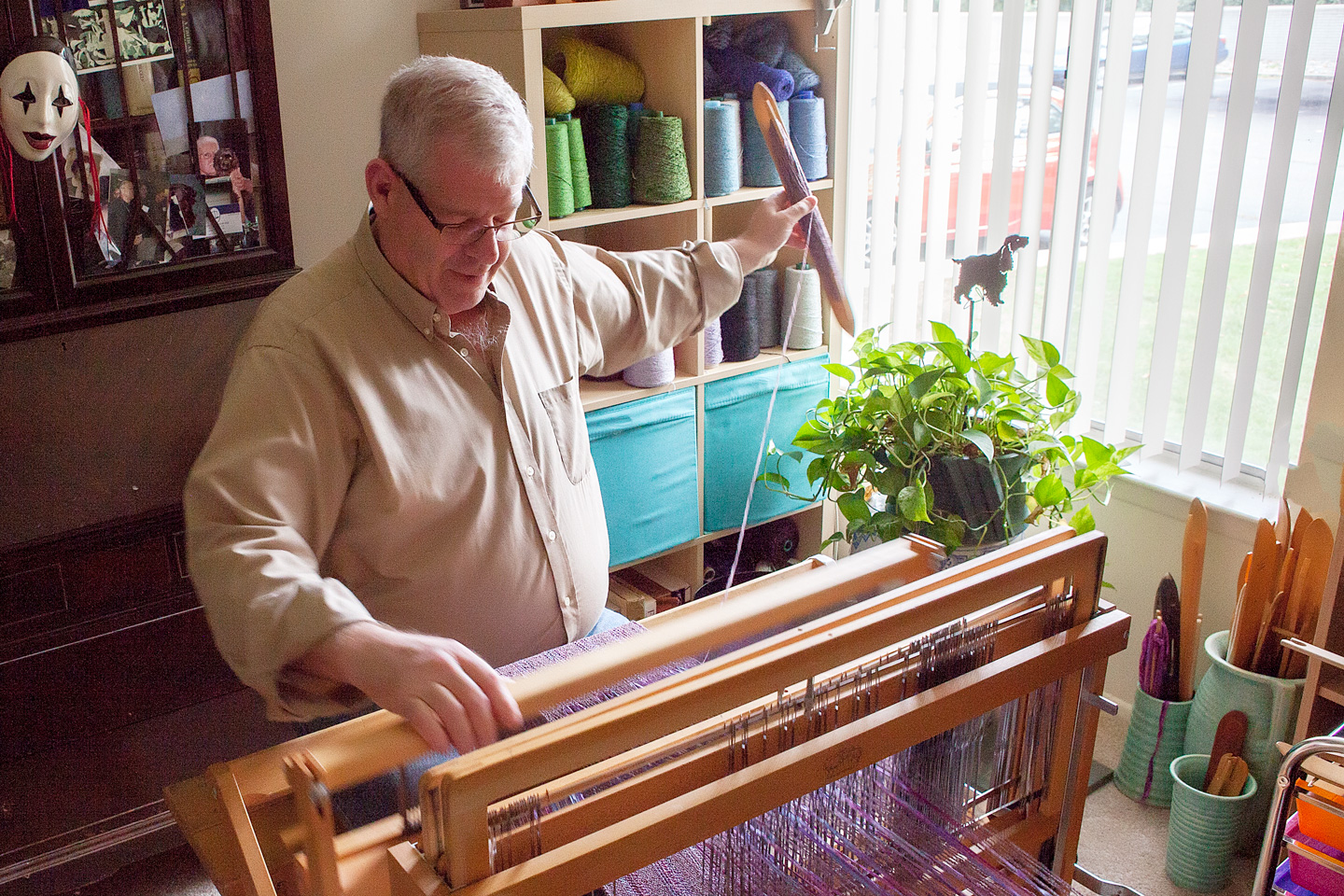 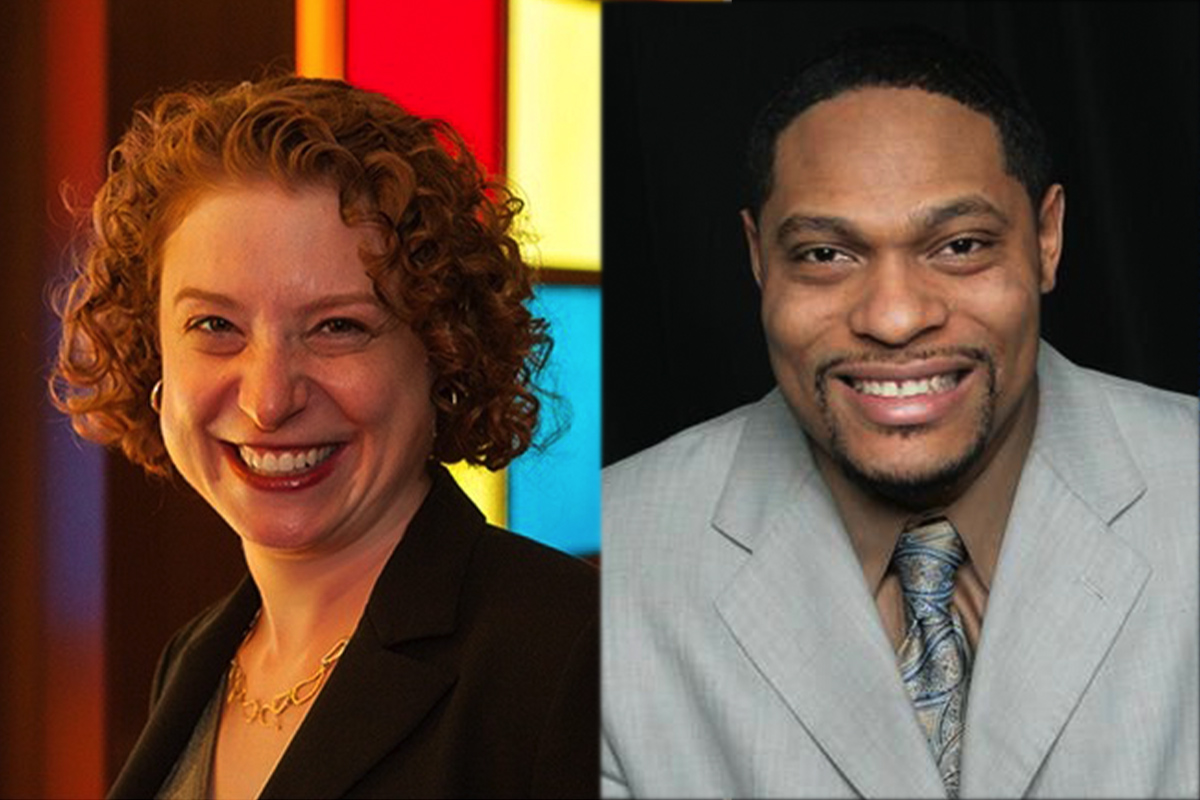