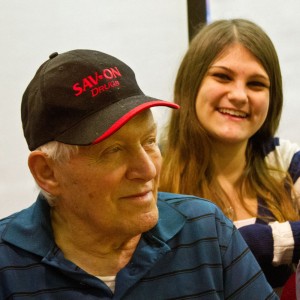 They were young: children and teens, driven out their homes and villages, brutally separated from mothers and fathers, sisters and brothers.They endured hunger, bitter cold and constant fear. They hid. They fled. They fought and survived.

They remember and their stories will not be forgotten.

A living testimony, an act of courage

On Monday, April 8, at 6:30 pm,  in commemoration of Yom HaShoah 2013, six Holocaust survivors will be joined by six high school students for an extraordinary one-time theatrical event to be staged at the Jewish Community Center’s Berman Center for the Performing Arts in West Bloomfield.

These are words that only begin to describe what the community is about to see. The program, entitled We Are Here: The Journey from Harmony to Horror to Hope, is a production of the Witness Theater, an innovative project where Holocaust survivors and high school students participate in a series of intensive workshops to explore their collective stories and to collaborate on a single public performance. With the generous support of the Nora and Guy Barron Jewish Life Millennium Fund, the project is brought to the community by the Jewish Federation’s Alliance for Jewish Education in partnership with Jewish Senior Life. 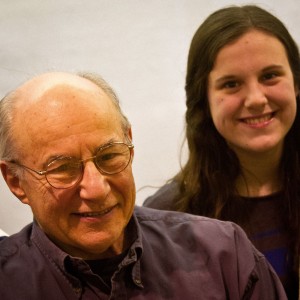 Conceived as an opportunity to link two generations on a journey of mutual discovery, the Witness Theater was initiated by Eshel, an Israeli elder-services agency under the auspices of the American-based Joint Distribution Committee (JDC). Now implemented as part of the high school curriculum in Israeli schools, the program was first adopted in the U.S. by the Jewish Federation of South Palm Beach in 2007. Replicating the Eshel model, the Detroit Witness Theater program will be the fourth such production in the U.S.

“When Nora Barron brought the Witness Theater Project to our attention, we knew immediately that we had to find a way to make it happen in Detroit,” stated Jeff Lasday, Director of Federation’s Alliance for Jewish Education. “As a member of the board of the JDC, Nora was familiar with the program in Israel and saw the opportunity to showcase some of the work being done there, as well as to connect generations in a meaningful way here in our own community.”

Stating her enthusiasm for the Witness Theater Project, Nora added, “My generation lived through the Holocaust, we know the history. And we personally know survivors. Younger people have no such experience. What better and more profound experience can we provide than helping to pass the baton of our memories on to a new audience?”

“Survivors of the Holocaust hold a unique position as storytellers in the Jewish community,” observes clinical psychologist Dr. Charles Silow, a consultant to the Witness Theater Project and Director of the Program for Holocaust Survivors and Families at Jewish Senior Life. With an estimated 750 survivors in Michigan today, more than 400 of their stories recently have been  archived in www.portraitsofhonor.org, an interactive exhibit at the Holocaust Memorial Center in Farmington Hills and a companion database online, both of which Silow helped to develop. The son of survivors, Silow attests that despite the traumas of living through the Holocaust, “Survivors have inspiring messages of hope, peace and tolerance to deliver.”

The goal is not to produce a polished play. A group dynamic and collaboration in every sense, the Witness Theater Project emphasizes therapeutic insights gained through learning, understanding and compassion, rather than the finished results of a live stage performance.The eight-month program represents a significant commitment of time, energy, intellect and emotion as the group meets every Thursday afternoon in carefully orchestrated sessions designed to create an atmosphere of trust and confidence under the creative direction of Corinne Stavish.

A professional storyteller, communications specialist and professor of speech and literature at Lawrence Technological University, Corinne explains, “We’re in this together as equal partners. The tone of our meetings is one of respect. That means everyone has a voice and everyone is heard. We engage and we listen as each person in the group speaks. We make a point to turn off our phones. We try not to let the outside world enter our space. We listen and learn and retell one another’s stories. And we laugh a lot – more than we cry – which might seem strange, but survivors enjoy a unique, crusty gallows humor that we have all come to share.”

“It is remarkable just how attached members of the group have become,” observes Rachel Taubman, Witness Theater Project Manager.  As an Associate in Federation’s Israel and Overseas Department responsible for teen missions to Israel, Rachel brings to the project her considerable skills in planning and team-building.  The students are asked to maintain a weekly journal to submit before each session. Their “assignment” involves answering prompted questions, as well as transcribing the recordings from interviews. “This has been a life-changing experience for all of us,” says Rachel, “but the teens have taken their responsibility for the work very seriously. Three of the students are enrolled in Corinne’s speech class for dual credit at Lawrence Tech.”

They are not actors. Nor is the production at the Berman the final act. As the artistic director, writer and master storyteller for the staging of the production, Corinne has a vision for what will be on stage and what might be carried forth once the Witness Theater Project has concluded. Noting that there’s an unmistakable cadence to each survivor’s tale, Corinne has written a script that she describes as a kaleidoscope of lines recalled and recorded from the students’ journals. “I want the torch passed, but I don’t want to lose those voices that we are still blessed to have with us,” she says, “because there will come a day that we won’t have those voices, and then the teens can use theirs.” 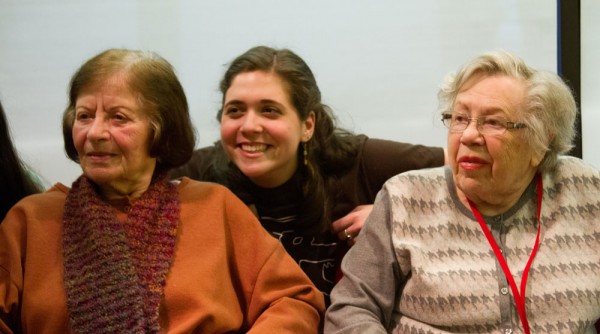 (Seated left to right in the photo, featured at the top of the page)

Rebecca Bloom, 15, sophomore at Andover High School; enjoys writing, the clarinet player in the production, “We Are Here”

Fred Lessing, child survivor, born May 1936; The Hague, Netherlands; in hiding as a Christian in Amsterdam, Utrecht Tilburg, Voorthuizen 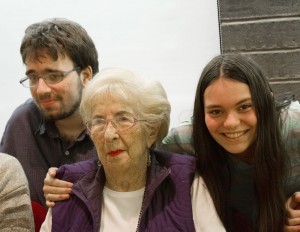 That simple statement is a kind of code that survivors often use among themselves when telling their stories. According to Corinne, it’s both a refrain of regret and triumph. “We cannot rehearse exactly the lines that will be said on stage,”says Corinne, “but certainly there’s a theatrical artistic vision which we’ll establish in rehearsals. Then, we’ll all have to let go and trust it to each of the players. Part of the word player is play, not only the noun, but also the verb. I want the group to feel free to play with the script and to ‘enjoy’ the experience. Even though these stories take place in the bleakest, darkest time in Jewish history, these people have triumphed. We need to rejoice in that triumph. Bottom line: I trust the players; I trust the audience; I trust the stories!”

Tickets for the April 8th,  6:30 performance have been generously underwritten by the Nora and Guy Barron Jewish Life Millennium Fund; however, ticket reservations are required.

Jewish Stars of Baseball Shine Bright at the JCC, Thanks to Bob and Sandy Matthews 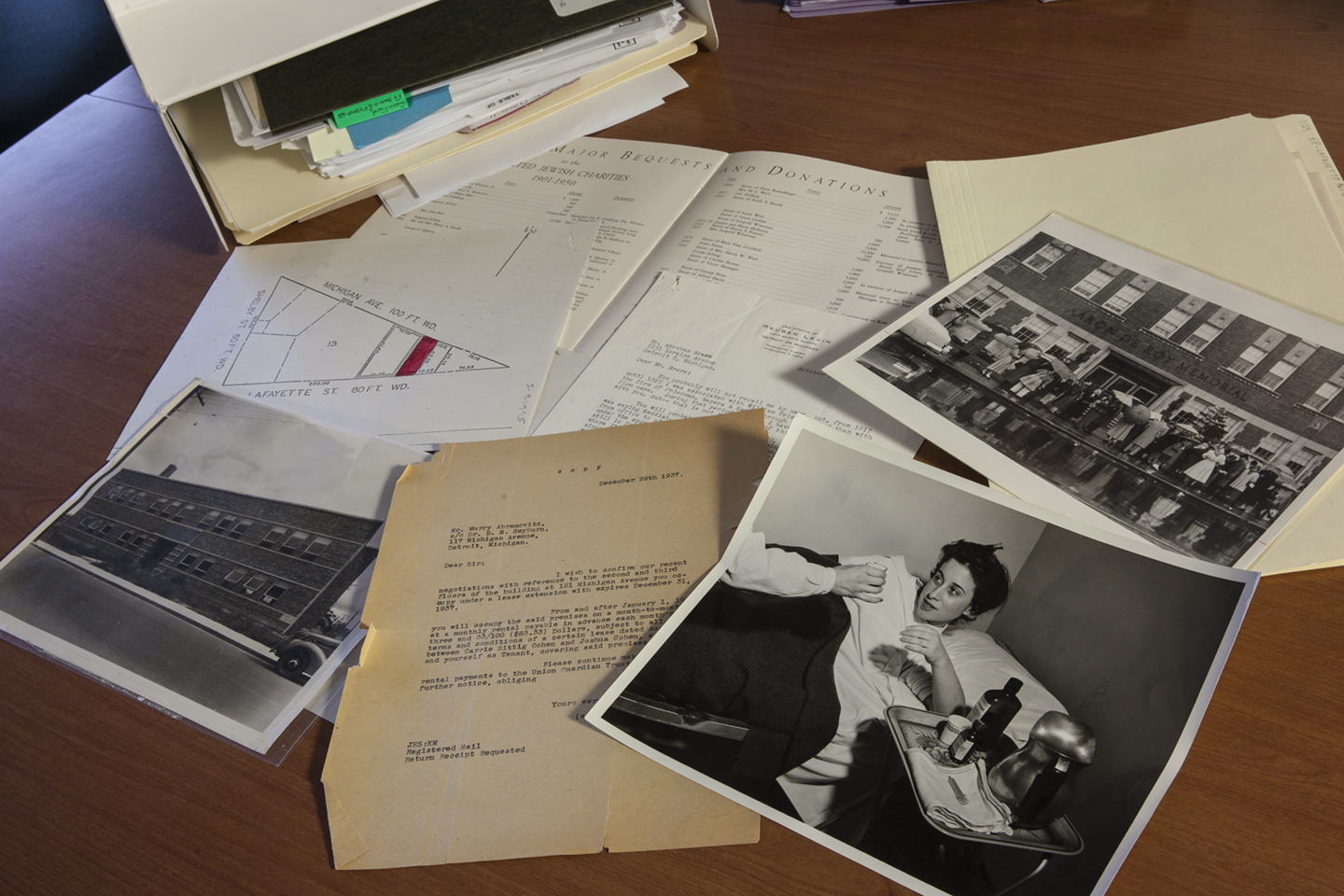 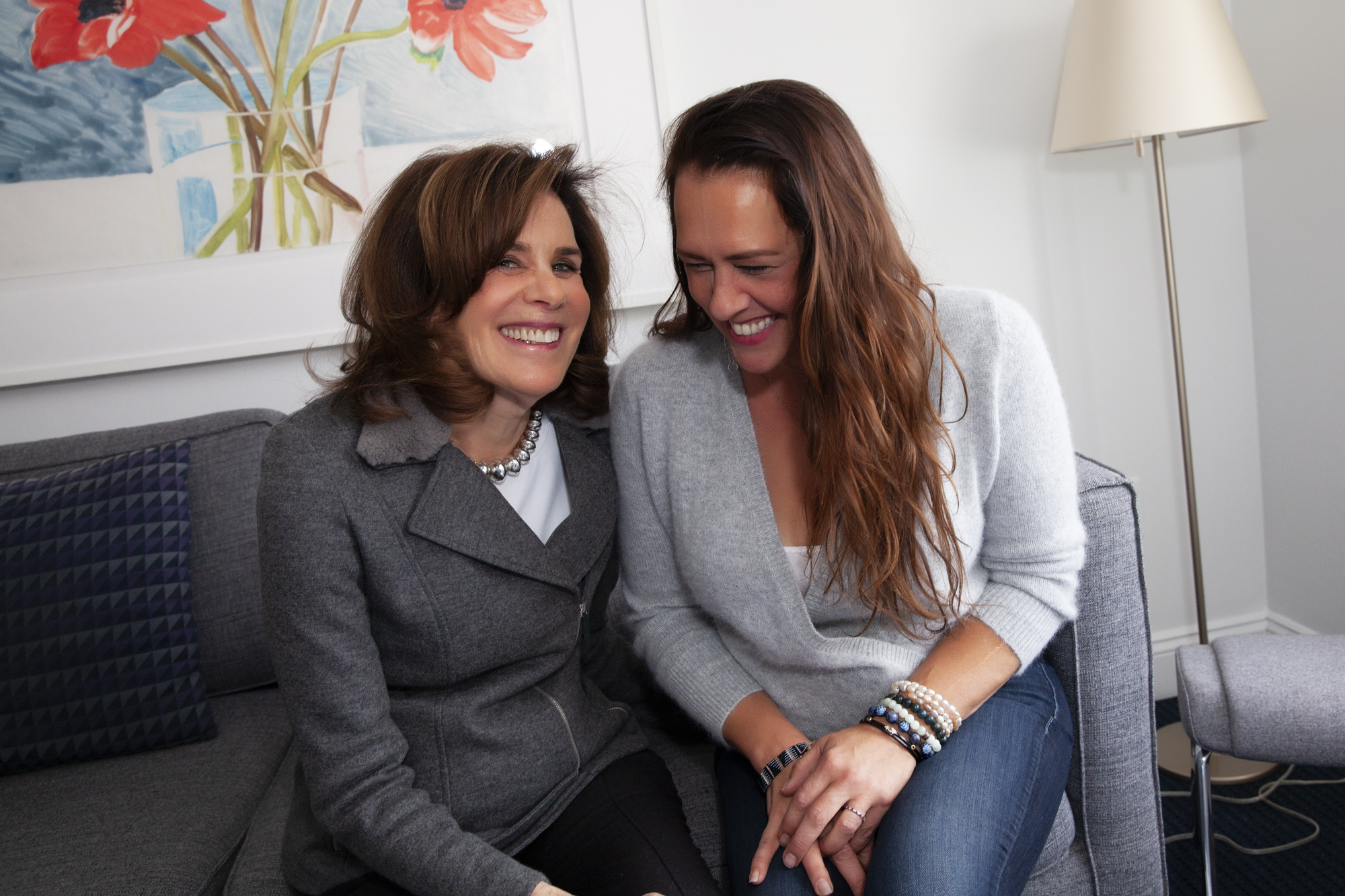